Vacation starts tomorrow! Not sor you, of course, but for Mistress Roxana and her friend and YOU will provide the necessary pocket money! Every cocktail and every piece of clothing will be financed by you. Can you imagine the bills they will rack up? With every Euro they spend they will laugh about you and sweeten their trip. Give your money to Mistress Roxana. Listen to what she's going to spend it all on... NOW!

You always were a tight pants fan. Denim makes you weak. Especially when I wear it! I see you watching me, fondling those useless testicles and I know how much of that testosterone you selfishly waste playing with yourself all day, everyday. It looks so good on my long legs and fits tight on my ass - riding into my juicyu crack. What are you prepared to do for me Loser? What limits will you push to get even the slightest chance at attention from goddess in her jeans??

Welcome to the chapel of sis Claudia, I am really disappointed in you, continue to be wanker sinners ... the prayers are not enough and therefore we pass to the punishments, the severe ones, the humiliating ones, today we are gathered here in this religious place to expiate the your sins and to help you sis Claudia will give you her sacred chocolate, but first you will have to listen to the sermon and take communion .... hahaha

You always want to penetrate your useless beta dick after you paid your wanking tax to me! This month there is a special event called "Loctober" - most of my slaves live in chastity and dispense. They live without stroking and cuming the whole month! And you will dispense with something, too. Dont worry, it wont be ejaculating! Watch my beautiful nylon feet and follow my instructions!

I am not only able to destroy you psychologically, but also physically! I take full advantage of my martial arts background and take my slave's breath in various ways. He has no chance against my strong legs and precise strangleholds and I have fun while the little bitch is desperately struggling for breath.

Goddess Vanny sits down on her slave pony's back and pushes him forward. The human pony runs and runs. He obeys his rider's commands and does everything she asks him to do. Goddess Vanny wants to see good performance from her pony and so she tests him relentlessly, completely exhausting the poor little equine without mercy!

Mistress Karina has a studio where she usually invites me if I am guilty of something. There I was subjecting to a hard flogging, in addition to the fact that I had to serve the Mistress as a toilet. This happened more than once. However, this time I was invited not to be punished. Karina decided to introduce me to her friend Kamilla. Kamilla showed interest in using a man as a toilet and wanted to try it. Mistress Kamilla turned out to be a plump girl with a cold and contemptuous look. She treated me with contempt. The girls humiliated me mentally for some time, ****** me to lick the soles of shoes. After that, they decided to tease me by showing their breasts, to which I have no right to touch. When Kamilla bared her breasts, it had driven me crazy. Her breasts were very large and very beautiful. Having had plenty of fun, the Mistresses began to use me as a toilet. Karina did it as usual. I had to swallow the huge chocolate sausages that slowly crawled out of her ass, one by one. I ate her turds for a long time and with great difficulty. Usually, the new Mistress cannot poop into the mouth of a slave for the first time. But in the case of Mistress Kamilla, this was not the case. Her big ass opened and three pieces of very smelly shit came out of her anus and fell into my mouth. I had to swallow them, despite the fact that they tasted very nasty.

The complaints of Dr. Ornella can be summed up in a single word - constipation! Both holes in the front and back are blocked, so the doctor has special operations......Now Dr. Ornella around the patient's first problem area. His urethra is dilated mm by mm with surgical precision so that the flow of urine and semen is guaranteed again! The steel pins used, also called dilators, are slowly inserted into the patient's shaft by Dr. pushed and the size is adjusted increasing!

The complaints of Dr. Ornella can be summed up in a single word - constipation! Both holes in the front and back are blocked, so the doctor has special operations......Now comes the second, the rectal stretch! For this, Dr. instead of steel on silicone to loosen the rear obstruction. In pounding movements, the intestinal canal is pulled by Dr. penetrated! Here too, Dr. Ornella different sizes to then check the finished result with your hand!The subsequent compulsory hemorrhage is then just a matter of form to check a positive result of the operation!

Goddess Sheila: Well my foot slave. Will you crawl back to lick my high heels? I let my foot slave lick my high heels clean again today. He crawls over to me and is allowed to lick my soles clean first. Come on, get out the tongue washcloth and lick the dirt off your heels. Then he will blow my heel and look at me and adore me. He sucks the heel of a goddess. As a reward he can suck the insoles and lure my foot sweat from the insoles. Hmmm, so delicious for my foot slave.

You're allowed to follow me - first in my car you can watch me driving. I take off my shoes to have better control of the pedals, then into my home, where I sit down at the table to do some sewing. The foot slave is already waiting under the table and I order him to lick the pedal of my sewing machine first. Then I take off my shoes again and start sewing - while the foot slave has to sniff and kiss my nylon feet. Of course, he has to lick my sweat-soaked nylon feet as well - and I know you enjoy watching this scene - a dominant lady working on the sewing machine and a submissive guy worshipping my divine feet! This is a non-exclusive custom clip for a fan. If you want me to do a custom clip for you, send me an email to marissa@madamemarissa.com!

Lady Missy does not know this cleaning slave. That does not matter for Lady Missy cause she craps and piss in his mouth without asking him if like that. He has already painful clamps with bells on his nipples. Lady Missy is very strictly to the slave. He has to kept the shit in his mouth. https://www.yezzclips.com/store750

I wear a silk robe and high heels at home. I don't wear underwear. I take off my robe. my stomach hurts, wants to shit. my legs open wide, start to shit in a pizza box. smearing shit all over my tits and alive. I like to play like that. I look amazing. in the second part of the video, I am walking in the park. I want to shit. lift my skirt and start to shit. seen in close-up how the shit climbs out of the ass. now I piss in a strong stream. relieved me. 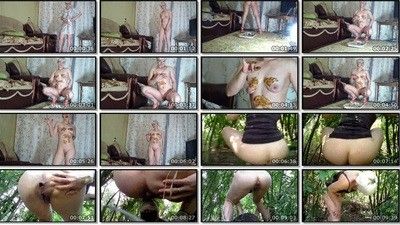 Rita sits on the slave's face in her black leather skirt. She sits on the Alex's nose and mouth very firmly and prevents him from breathing. When the slave is shakes she stand up to give poor boy some air. Rita sits on Alex in different poses, and the most comfortable, is when she put her legs over the slave's body and pushes his face with her full weight (49kg / 108lbs). In this pose she don't want to move. So Alex should take a really big breath and hold it, until Rita thinks thats enough. For how much time will slave holds his breath? Also, you can watch some scenes from the slave's point of view (PoV).

It's time to make fun of you again, you idiot, loser. You will fulfill the tasks given by me and you will post humiliating pictures to make me happy. You will stroke your pathetic clit for Me under my instructionsa and you will submit to my pantyhose and feet because your mind is fucked already!You have to buy this video because you will do whatever I want and because you are just a loser. I was clear enough ?