I make it so easy you do not!What you have to do. you will learn in the clip!

First her pony might have thought that he would have an easy ride with the sweet looking Mistress Cleo but she shows with a strict hand and hard leg work she knows exactly what he NEEDS. While her riding lesson she plays with her weight and her feet at his back - a good piece of work for the pony but a lot of sexy views for you!

Sophia is another hot girl who needs a lots of attention and she knows how bad you are addicted to her feet! That was a very long day with her shoes on so she wants you to bow down on your knees in front of her feet to take good care of them! Those leather shoes become very smelly with time so she takes them off to completely cover your face with her sweaty kitty socks! They actually smell really bad so she just makes fun at you and rub them all over your face! She makes you lick the bottom of her socks just because she loves to feel your warm juicy tongue on her feet! Sophia also takes her socks off to completely smother your face with her smelly bare feet! She wants you to sniff them and tell her how bad you like that smell! Don?t you wish you could be here and lick my 18 y.o. virgin feet? She makes you stick your tongue out to lick the sweaty bottom of her soles and suck on her toes like a good little puppy slave! Make sure you are doing it right!

Mia and Hailey both really wanted to dig into Chadam. They wanted to make sure that he had a match that he would never forget. With both girls scantily clad in their tiny outfits, it was game on. They flip a coin to see who goes first and Hailey wins. Hailey pursues chadam with sheer aggression and comes on strong. Hailey makes Chadam tap a few times then it's Mia's turn to jump in. With both girls smashing chadam's face into their ass and pussies, he is constantly tapping out, as both girls go at him one after another. With some brutal scissors from their lethal legs, chadam is turning into a pile of mush here. NEaring the end both girls now jump on him, making it a 2 on 1 and with chadam barely being able to move, both girls claim their victory, posing and flexing while sitting on him. Great female superiority here. 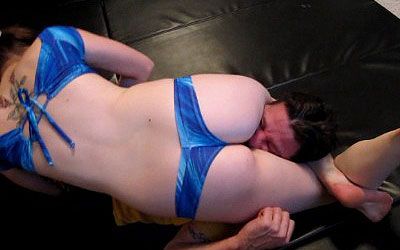 Dominant girls like Emily, Gia and Nicolina can look cute and simple in jeans, but their feet and asses simply can destroy men's pride. Poor guy is under attack of these beauties and helpless beneath them. Crazy butt drops and some triple actions.

next clip is one for the fans of our collection of high class fetish clips starring nidian! she is dressed in a shiny robe with shiny gloves playing with her whip first, putting it into her perfect white teeth or let it crack through the air... YOU can also get into a close contact of her shiny high heel boots, maybe YOU are allowed to lick them...? or she will put YOU on a leash and walk with YOU for a while? or she will take of her wonderful gloves and staring at YOU lowlife existence with her sparkling intense eyes... who knows...imagine yourself...if YOU can... class a clip! underlined with own produced music! contains also special editioned parts!

You know I really have a thing for tight jeans and I know you want to see my jeans ass! You're know going to jerk off while watching my jeans ass. You'll adore my butt and continue to stroke your dick. You'll fall in love with my jeans butt and spunk on it like I demand. Come on - start jerking!

Mistress Jana's slave is now being humiliated and degraded, relegated to be a pony and ridiculed as a bitch and a bastard. Seeing her in her sexy lingerie, the slave will be honored to serve his sexy mistress, carrying her on his back, won't he? Whether he likes it or not, he is now being made her pony play slave.

Christin crush and tramples one pair Chucks Sneakers with her old worn Boots. She destroy the Sneakers .

Mistress Blackdiamoond wanted to show me one of her slaves. She ordered him to lick the soles of our boots clean while we were smoking a cigarette and made fun of him. Of course the street filth from our boots soles was not the only thing this disgusting loser would have to eat. We also used his mouth as our ashtray. Lateron Blackdiammond ordered him to suck the heels of her boots like a cock while she was lauhing about this faggot. For the slave this meant almost 20 minutes of extremely humiliation.

So ... do you still get some air? Do you like the position? Yeah, I bet you like it, so better thank me for it, jerk!

I want you to get your ass ready for all that cock you are going to take for me. Pull out your cock and get it all nice and hard for me since the hornier and harder you get, the more eager you are for things to be in your ass. Start with one finger, then 2, then 3...see where this is going? We are going to stretch your ass WIDE!

Do you want to see Serina's smoking hot nylon ass which she is hiding beneath her jeans?Serina turns around, with her ass sticking in your face, and then she begins to pull down the jeans; Slowly, ever so slowly.Her tight nylon ass now nearly pushes into your face. You are allowed to come even nearer. That's right - press your face directly against her nylon ass!

This is the game, video performance close to reality! Lady made a great party yesterday and today she feels sick. Lady made a toilet slave of her boyfriend. She placed a special chair on her slave. Now she could spit in his mouth and face. She feels very sick, she pukes in his face, spits in his mouth. There are puke and spits all over his face.

Candy and JJ were resolved to welcome the new guy. Lower growth and lean, he's one of the few who dare to embark on an adventure with the girls from DuneFeet. He was interrogated, the girls are studying its durability and introduced him to the world of domination. Reverse scissorhold by strong legs of beauties.

Mistress Gaelle turn at home and want to humiliate her house slave, she ask at her slave to take off her Luxurious sneakers and ordered him to smell her shoes and sweaty socks. She rubs and feet and shoes on his face, the slave smell the stink over and over and Mistress Gaelle like that. At the end, she give him the privilege to lick her divine bare feet.

Jackie always need attention all the time but especially after a long day with her shoes on! Her feet sweat a lot in those shoes and she loves to watch her slave take care of her feet so she makes him bow down on his knees to let him worship her feet! She makes him take her shoes off then completely cover his face with her smelly bare feet! She rubs them all over his face with her cruel smile and makes him take some deep breaths in her feet! She just loves the fresh air coming out from his nose and his mouth on her feet! Jackie also wants him to stick his tongue out to lick the sweaty bottom of her soles! From heel to toes! She also asks for some kisses on her feet and makes him lick the inside of her shoes! What a Sexy Brat!

Alex and Teodora continue to dig a grave for skinny guy. They bounce on his throat with their feet in tan pantyhose and finaly broke a bed. Brutal and painful.