I went to attend to some business and left this slave to clean my dungeon. I arrived back early, and find him sitting on his ass doing nothing. He says he was resting. I'm furious as he hardly did any of the chores that I left him to do. So I'm going to make sure his ass is well and truly broken. I get him over the chair and pull down his pants. He has no idea what's in store for him. I fasten on my strapon, and begin to fuck his sorry ass. His complaints and squeals mean nothing to me, as I'm so enjoying making this lazy fuck suffer. His ass is going to be so raw, he'll not be sitting on it for a while. What a ride...

And the next toilet slave who wanted to serve me as a living loo and swallowed my shit as well as swallowed my piss! Since the slave, in the traffic jam, had stood and therefore came later, I had powerful pressure in the ass.Have my Divine shit, still stopped until the slave was there. Therefore, my shit was extremely hard, what the slave still felt. After the slave was ready, I sat down with my asshole on his mouth. It did not last long, and I pooped him a fat, It did not last long and I pooped him a fat and firm shit sausage, into his mouth! Then I ordered him to eat my shit. Since this, as I said, was very hard, it lasted until he had eaten the first half. To eat the other half of my shit faster, I crouched over the slave`s mouth again and pissed him a fat load of piss, into his mouth filled with shit. The whole time I made fun of him and humiliated him! That you see from 3 camera setting! And also horny close-ups !!

80795 - Spitting on his diploma and crushing it! (small version)

One of my fans sent me his valuable diploma - and I'm going to destroy it completely. I start by spitting on it a few times, then step on it with my sexy wedges. As the paper is ripped apart under my shoe soles I continue to spit on it every now and then. In the end it's only a pile of wet spit-soaked scraps! This is a non-exclusive custom clip for a fan. If you want me to do a custom clip for you contact me at marissa@madamemarissa.com!

My hands, my feet, the paddle or the crop? What will hurt the slave the most? And what will be the most fun for me?! Let's find out! I start by slapping his face with my hands - that's quite some fun already! I try to slap his face with my feet as well, but that's not as much fun - at least not in this position ;-) Then I make him get on all fours, grab the small leather paddle and start to hit his ass with it. It's pretty loud, but I'm not sure if it's hurting him that much - so I move on to the crop - yeah, that's better! He tries to get away from me and I put him on a leash to keep him in position - before slapping and hitting him some more!

Godess love to feel her shitty diarheea on her skin, and she does it again in her pink pantyhose. On the floor her diarheea will be perfect for paiting and writing messsages for her obedient slaves !! 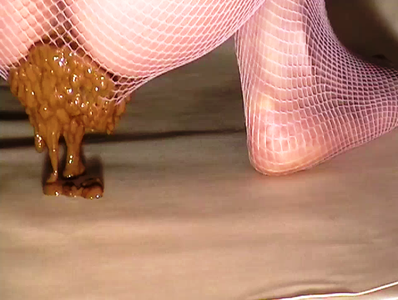 It was just a normal night for a beggar when suddenly, a car stopped in front of him and then pulled him inside! Not long after, he is brought inside a house and further into a secluded room where he is then stripped of his clothes by a lady! Before he could say something to contest the situation, he is laid on his back and then sat on his face! There is nothing that he could do but drench the ladyâs panties with his spit which she gladly enjoys! When she gets bored, she gets up, takes off her underwear, and then urinates on him! From time-to-time, she would push her pussy against his mouth to make him swallow her piss! When she has released everything, she proceeds to order the victim to eat her pussy and asshole! Knowing what she is capable of, there is nothing he could do but comply with her orders! The only time he stops is when the woman says so!

The real lower slaves of all are those who are into everything that normal people leave in their toilets. In my seductive mode I turn my abulic servants into swallowing slaves and piss on that sissy, for that the dirty casanova can suck all of the golden champaign. Carmen Fire is on it, too, and watches the dirty spectacle, until that sissy jerks off...

My slave is totally into pain and he is looking forward to getting beaten up my mom and me. But mean as we are, we want to surprise him in a very bad way, because we know he's ticklish. And instead of enjoying pain, he gets tickled without any mercy. Of course, we tied him to the cross, so he has no chance to escape. He is already near tears with loud laughter and already out of breath, but without mercy, we continue until finally he really only hangs on the cross like a wet sack. This is a custom made clip.

TM abusing the toilet as usual with two nasty dumps back to back. The first one is after work where she drops a chocolate mess and the second is after her workout where she dumps some mean logs.

When I was very young, I loved to wear mom's shoes. Now I'm 19 years old, but for once I'm back to the old ways! Mom had just bought a beautiful pair of black shoes with high heels so... I stole them and, venturing out in the garden, I walked in the lawn to crush apples and mushrooms with those lethal shoes at my feet :) 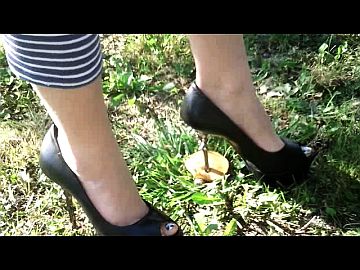 Clamping, what does that mean? Where can you set it, for how long can it be at a slave, how does it feel? What is there to regard, what can be done wrong? Annika Bond and Lady Joy show how to...

He is spending the family budget on gambling and booze and I'm having none of it! Punish him, I must! I commanded him to lie down on the floor and lay still. I squatted above his face and unloaded a huge chunk of shit on his face! Then I made him clean my filthy asshole with his tongue!

Me and my friend Miss Lori have been to the city to do some shopping. When we were on the way back to our hotel room I call my slave and order him to lay down behind the door so we can use him as a doormat. It was raining all the day so our boots were really muddy and full of street filth. When we come into the hotel room our little foot doggy is already waiting for us. We step right on his chest placing our dirty shoe soles right on his mouth and use him like a doormat.

I have a slave who loves to eat dessert of my shit. Sometimes I like to smoke a cigar and little bit drink a good whiskey after hard day. Slaves enjoy watching how I eat or drink. Because then it is waiting for a great dessert of my ass. My toilet slave like when I give him a lot of scat, but before that I need to eat well. I shit in his mouth - he must eat all of my scat. Also, after I go to the toilet, the responsibility of the slave enters necessarily lick my ass clean. I would also like when my toilet slut to drink urine of me pussy. I think it's fine and I'm very pleased. How beautiful and cute to shit in your mouths, losers. Open wider your mouths and swallow my spit, eat all of my shit and drink my piss. I'll see you tomorrow at the same place as my personal toilet.

After the slave has get his nipples with hot wax the ladies are spitting several times in his mouth. Then Mistress Michelle is peeing in a big glass and after that the slave have to swallow the full glass of the fresh pee from his Mistress.

She kicks his nuts up into his throat!... Don't forget Megan either - at one point Megan slams her sexy 8' stiletto straight into both his gonads hard enough to Rupture ANY man!... Jersey has just finished her shift Dancing & She's all dressed up in her SEXY Goddess outfit!... She's had a really bad day at the the club dealing with some "freaky perves" & she just feels like kicking anything with a scrotum!... Unfortunately for this poor loser - he has the first set of male genitals she comes into contact with & she decides to kick them to mush!... GREAT Close Ups + POV angles as she kicks the life right out of his sex organs!... "I'm surprised your still alive!" - Jersey yells as she just keeps SLAMMING her hard Dancer shoe right in his nuts!!!

Elegant Big Boobs Lady fucks - Lady Sophie dressed elegantly with nylon stockings suspenders and pumps, presenting her full beauty on the sofa. Look like her with her big tits game. It seems appetite to give on their fat, fleshy Breasts! But you still have to figure it out. Galactic great natural monster Breasts. Watch the big lady tits, presenting her 100% monster tits unique fetish

Miss Dr. Fox lets her two subjects grope her but as they start petting her through the panties the stupid test-slave starts acting up again. Well, let him sniff the pumps for a while to make sure the experiment can take its course. Finally subject Erik is allowed to shove it in so Foxy Foxy can receive more of the delicious juice. The old tit-squeezing bastard starts humping the Doc, getting more and more aroused ...exactly as originally intended. In the end Linda starts giving him the finishing touches herself to assure he contributes a substantial amount of testing material. Quick! Fill the testing cup and dump it in the testing slave... 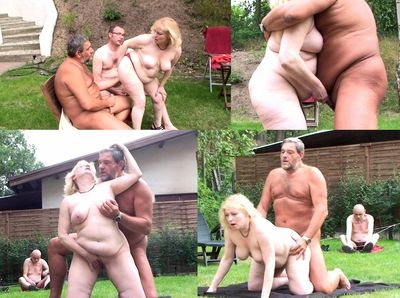