Telling you exactly why no girl will ever touch you/date you/fuck you is just so kind of me. I think you need a bit of honesty in your life, just remind you of your place - at the bottom of the pile. The last man a girl will ever pick (if you're that lucky). Watch this daily to remind yourself you are nothing but a useless beta.

Mistress Giorgia now assiduously wants a real human toilet every time she has to go to the bathroom, a real Queen like you now should not even touch a ceramic cup!The toilet on duty is made to lie down on the floor in the bathroom, the Mistress sits on his chest and begins a beautiful game spitting and centering the toilet in the mouth.The slave is totally in the hands of Mistress Giorgia who crouches on his face and starts a fantastic piss.The toilet is performing and swallows all the pee of the Mistress, like a real toilet must do!The Mistress is not yet satisfied with his toilet and orders him to keep his mouth open because he wants to shit inside.Soon the Mistress's chocolate enters the mouth of the lucky toilet slave.

ITALIAN SPOKENCUSTOM REQUEST - Admire the perfection of my ass while wearing my favorite jeans. Watch as these pants highlight even more the beauty of its form. And once you take off your jeans, look how much shit my wonderful ass can produce!

IÂm making and sending you a video of me pooping to enjoy while youÂre finished. I want your nose right up to your screen as you watch me wink my shit-brimmed anus and harden in your hand as you listen to the glistening sounds my wet asshole makes, just begging to shit. I want you licking your lips as my pussy drips with excitement as I'm about to birth all these smelly turds for you. Mmm, I show you my load and make you eat all that stinky shit &#128521; So glad you still get to watch me shit from the sourceÂ

Addict.Let's call a spade, a spade. You're a simpleton who will pay $100 for 2 mins of verbal abuse. What am I saying to you? How am I degrading you?You need to know what abusive words come out of My pretty mouth. You need to know. You need to hear Me say it to you, personallyYou're addicted the con. Your dumbass is just in luck, as I'm ALWAYS on the long con.

My little cuck bitch, nate, has been serving Me for a long time now, so this summer, I gave him the ultimate honor (and the ultimate Torment) by allowing him to be present at My wedding in Ireland! After the ceremony, We retired to My hotel room to have some fun! nate bitch can't resist My perfect feet, so I give him a little more than he bargained for by trampling all over him! My weak, pathetic little foot bitch is stripped naked on the floor, chastity device fully on display, and coerced to endure my trampling feet all over his stomach, chest, face, throat, cock, and balls!!

Again and again, Lady Amy torments her slave with new cruelties until she reaches her most brutal. She has already beaten him up today and trampled him with her high heels. Now it goes to another round for the slave. He lies with his head encased in the SmotherBox. Lady Amy stands above him in jeans shorts above him, her ass getting closer and closer to him. She sits down on his face and flattens him. His nose is squeezed between her buttocks! But that's not enough for Lady Amy. She gets meaner and harder and hits him on his naked upper body and kicks him in the side with her high heels. Real torture for the slave and a lot of fun for the lady! 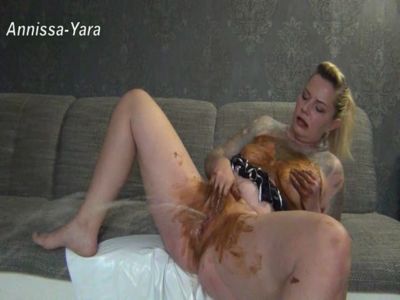 You didn't think you'd make it through the month without some festive humiliating tasks, did you? This one is my favorite. While you might not get weird looks in public, you're going to be getting pretty intimate with this pumpkin. Yeah, you'll be fucking it (probably the luckiest you'll get on Halloween to be honest), but you'll also be doing so much more!

I am stunning in my little black dress and high heels as I walk in on the toilet slave, the useless bits bits of flesh that formerly served as its genitals shaved and bound. From beneath the toilet seat, it can look up at my red panties as it worships my feet, licking the bottoms of my shoes and then sucking my toes. You will imagine that it is your own tongue pushing its way between my toes as your furiously MASTURBATE.As I take my position on the toilet seat, I pull aside my panties and you are so close to my asshole that you could almost put your own tongue inside it like my slave. I have to lean forward to slap the slaveÂs balls and keep its ÂdickÂ hard so you get an even more beauteous view of my puckered asshole and pouting pussy lips. The slaveÂs tongue loosens my asshole and goes all the way inside and my asshole becomes more engorged and begins to protrude threateningly.Finally the blessed reward arrives and piles up on the slaveÂs face. After I decide to reward the slave with an orgasm from my own hands. Alternating between slapping its balls and pumping its dick, I finally make the pig cum and it squirts its mess all over its hairless body. My laughter fills the room as the slaveÂs mind is further warped, associating pleasure and pain, degradation and ecstasy. The degraded pervert lies in its own filth and mine as I stand over it, my glorious and unattainable pussy and my radiant smile mocking alike mocking the debased SUBHUMAN TOILET. Now imagine looking into my eyes as you play with your little dick and beg for permission to CUM.

I just got back from riding and still wear my riding pants and riding boots - and I brought along my crop to keep the loser in line! I order the slave to lie down on the couch - so I can sit down on his face and smother him under my ass! But on the couch it's way to easy for him, so I order him to get on the floor and immediately the facesitting continues. I don't like that he's struggling so much and tell him I'll use my crop on him if he doesn't stop moving that much - but of course the hard riding pants hurts him and he can't keep still under my ass! This is a non-exclusive custom clip for a fan. If you want me to do a custom clip for you contact me at marissa@madamemarissa.com!

I just got back from riding and still wear my riding pants and riding boots - and I brought along my crop to keep the loser in line! I order the slave to lie down on the couch - so I can sit down on his face and smother him under my ass! But on the couch it's way to easy for him, so I order him to get on the floor and immediately the facesitting continues. I don't like that he's struggling so much and tell him I'll use my crop on him if he doesn't stop moving that much - but of course the hard riding pants hurts him and he can't keep still under my ass! This is a non-exclusive custom clip for a fan. If you want me to do a custom clip for you contact me at marissa@madamemarissa.com!

Open your mouth! I gotta shit...its enough in my fluffy ass to feed you for an entire week, well yesterday I ate a whole bag of apples.Apples make me shit like a well fed race horse, which means after whole bag, I just cant stop shittinin your nasty ass mouth..go on,open your mouth as I continuously shit all day..all you can do is lay there with your mouth wide open waiting to receive treats and you will realize that this is truly a shitting of epic proportion.

96918 - Maid Smeared with Feces While Being Fucked! - Full Movie

Having a hot maid, a man couldnÂt stop himself from wanting to get some action with her! So much that he decides to learn the art and he is lucky to be successful! In this situation, he makes good use of the newly acquired knowledge! After putting the woman under his control, he begins intimately kissing her on the lips! When he starts wanting more, he strips off her clothes and sucks her tits! Shortly after, he directs his attention on her pussy and devours it! Though, he doesnÂt spend much time on it, instead, he has her get down on her knees and then pees inside her mouth! When he could no longer release anymore, he pushes his cock down her throat! Eventually, he sits her down on the couch with her legs spread wide open! Without further ado, he finger fucks her asshole and has her defecate! Immediately, she releases a huge stream of wet feces! It doesnÂt end there, he then proceeds to spread her legs apart and starts fucking her right in the pussy! He then later bends her over and pounds her doggy style! While doing so, he smears feces all over her body! The only time he stops is when he is ready to cum! By then, he pulls out and shoots his load on her face!