Mistress Eden trample a slave for the first time under its splendid high heel shoes, she digs her heels in his stomack, crush his face, jump on him and finish by making him lick clean its dirty soles and heels.

Balcan Beauty Natalie is one pissed off cruel girlfriend. She's such a pretty, cute, young European princess but she can still find so many ways to make you suffer for her. You've been a good obedient little bitch for her. You've taken her on expensive shopping trips and paid for all her jewelery, pedicures, and hot teasing outfits but eventually you ran out of money and now she's going to show you just how dissappointed she is. She's going to torture you for being so worthless to her. She's going to start your torment with some spiteful kicks to your pathetic balls. She tells you that she's going to make you cry in your agony. She wants to see tears rolling down your cheeks! Despite your misery, Natalie has only just begun. She's got plans for a long, drawn-out ordeal for you. You'll take her heel in your ass, you'll take her whip and while you're tied up she's going to claw at your flesh with her nails until you bleed. Natalie is cruel! 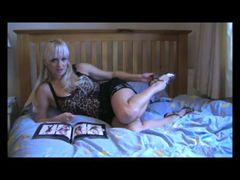 Damn! Katy was mad at this loser for some reason so she wants to give him a hard time! She makes him lick and clean the bottom of her dirty sneakers with his tongue! How does it taste bitch? She also takes them off and force him to take some deep breathe in her shoe after walkin' all day long! They were so gross and stinky! Katy also makes fun at him and smother his face with her smelly barefeet! She rubs them all over his face and command him to lick the filthy bottom of her soles! She also try to enter one of her foot really deep into his mouth! Suck on my toes now! What a Bratty Chix!

Mistress Lea test a new slave, she make him lick and worship its new high heeled shoes Louboutin, the slave lick over and over the red soles and Mistress Lea crush his hand and fuck his mouth with its shoes.

20 y.o. Princess Kimberly is good at humiliating & degrading men for Her pleasure. She spits in Her slave's mouth, makes him kiss the filthy bottoms of Her clubbing shoes then uses his tongue to clean Her pretty & VERY dirty little soles. Soooo good!

I know how much you adore me, how much you adore my hot legs, my feet and my hot ass. That's exactly why I make you horny and show you what I got. Really bad luck that your tiny dick is trapped in a chastity belt - to which I own the key. My ass right in front of your nose - that really turns you on, right? Look at the key - and be sure to bring a lot of money if you want to have it back. And if it's not enough - well then you'll take another trip to the bank - or I'll keep the key here.

I bet you can't resist to buy this clip. You'll see me wearing my hot fishnet pantyhose. Of course I look super sexy and you won't be able to take your eyes from my ass. Come on - take a close look at my perfect ass! You won't find another ass as hot as mine and even more so none that's moved so hot.

Mistress Lea like to use a slave as a doormat, he lick clean its many shoes and boots all the day, and when she go out or turn back at home, she trample him without any pity like a vulgar doormat and make him lick clean its dirty soles.

You want to see Katja's hot hands? She will show them to you and measure them. She takes the meter stick and measures her hands and fingers. She has really sexy hands and shows them in every details. She even strokes them and points at you. Come on, kiss them!

So, what did you bring today? A nice envelope filled with money? Let's take a closer look. But what the fuck is that? Only a few small bills? You should know that I'm not used to receive "change" ... 50 EUR bills are acceptable, but 10 or 20? Really? You're a real idiot - cause now we've a problem. I told you about that new bag I want - but this few bucks won't be enough. So, you know what you've got to do. Get some more money for me or I'll tell everyone what a loser and wimp you're and press my dirty shoe soles on your face. Get going!

This small working RC is victim for Lady BÂ´s High Heel Sandals. First she play with it, but the Car wants drive away. But Lady B is faster. She step with her sexy Feet on it and crush it flat. After she crush the Transmitterbox in many pieces.

You've come back to grovel and beg me to take you back huh? Not a fucking chance loser. I'm with yourbest friend now so why on earth would I take back a pathetic, weak little submissive cuckold? You mustbe joking! Maybe I didn't make it clear to you the first time. Maybe I broke it to you too gently, soI guess I'll just have to explain to you in the most heartless way I can exactly why I'd never evertake your worthless body back. Oh but maybe I'll watch you as you cry and plead for me to let you stay in my life. Maybe I'll force you down on your knees to grovel at my feet as I laugh at just how much you're willing to humiliate yourself for me. And then just when you think you've convinced me, I'll laugh in your stupid face. I will NEVER take you back loser. 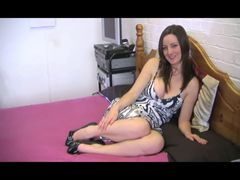 You wanna see that, right? Jenna's wearing her hot blue jeans and sticks her ass out high - in your direction of course. What a tasty ass.

Lady B is wearing her new wooden High-Heel Sandals. You can see it on the Lable of the bottom of her Soles. She crush with it 15 Cars. She walk simply over it again and again, slowly and fast. Its great, every step a Car destroyed ! She step hard and jump with both Feet , crush all the Cars merciless Flat. At last you can see the Lables an her Soles .

Jenny (23) takes off her skin boots and thick socks. Afterwards she cuts and vanishs her toe nails.

I'm taking you into the ladies changing room to force you into trying on your slutty little outfit. I'm going to put you into a tarty top, tiny miniskirt and cock-hungry lipstick and put you out to work for me. Maybe I'll turn you into a street-walking hooker, maybe I'll hire you out as a submissive maid to clean my girlfriends houses. Whatever humiliating job I decide to give you I expect you to look like my perfect bimbo girlie and that means you'll be properly painted in the prettiest make-up. Thick glossy lipstick, tarty eyeshaddow and deep deep nail polish. OMG you're gonna be the trashiest looking whore on the street! 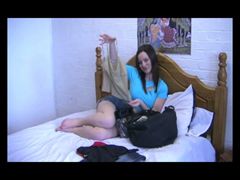