ENGLISH SPOKENCUSTOM REQUEST - Suffocate SLAVE for a long time, like 40-50 consecutive secondes by blocking nose and mouth with your ass, and also the belt. He's attached and tied down and unable to move. Smother him good, the slave struggles and gasps for air, but you just won't let him to get any. You don't move your ass from his face. The slave is trying to beg for you to stop sitting on his face, but you just won't stop smothering him and become even more rude with him by farting more on him. Then shitting on him and facesitting more longer time...

Summer is finally over and I had so much fun going out and spending it with my friends in the perfect, warm weather. Unlike you, I have a social life and people that want to hang out. I dont have to sit inside all day/night jerking off while everyone else around me goes out and has fun. The only fun you have includes a wallet, tears, and hopeful thinking. Losers like you can't have the type of fun that I have. You will never experience true, normal fun like we do.

There is something so powerful about my petite size 7 feet. You cannot get enough. This clip tells you exactly how to worship my perfect feet through clips and online. Be a good little foot bitch and maybe you will get to in person. I look forward to you worshipping my feet like they deserve!

How long can you endure with my sexy ass on your face? You can't breathe as my hot butt presses down hard on your mouth and nose - I'll give you no chance to breathe! Can you endure it as long as I want you to? If you can, I'll have a nice surprise for you! Come on, I dare you! I know you little slave can't keep your eyes off my sexy pantyhose ...

Mother and daughter are back and even more cruel, they decide to have fun with their new slave, The mistresses order their slave to get on their knees and lick the soles of shoes that were filthy very dirty, the language of the slave became black, that was A punishment for the slave not to have cleaned the floor right, The mistresses are very demanding, so the slave had to lick to the last dirt of the heels of shoes and soon was trampled by its mistresses, who were amused making the loser of its employee of carpet. Soon after they ordered the slave to remove the shoes from their feet and the mistresses forced the slave to smell inside the shoes of their mistresses, then they spat on the face of the slave and rubbed their feet and hit his face with the soles The slave had to worship and lick the feet of his mistresses, who mocked the face of the slave, and thrust their feet into the mouth of the slave and forced the slave to hold all the fingers inside his mouth, but worst of all And the bathroom was not cleaned right, so as a punishment for the slave to learn to clean the bathroom of his mistresses, was that the mistresses stuck the slave's face inside the toilet several times , And pulled the discharge, the slave in so much private bath that he carried in the face, and they laughed the poor loser of his employee. 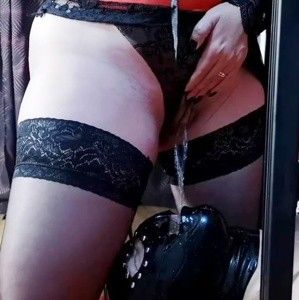 Its a hot day and after a long tour Miss Samantha puts a guys face under her and forces him to sniff. His face is only used as a human footrest by Miss Samantha. She removes her high heels and and presses her both smelly feet covered with nylon socks on his face and wiggles her toes to give him the pure smell. After that she removes her socks and presses both bare soles on his face and ignores him while having a drink and more... Isn't that a dream being Miss Samantha living footrest ? Great Views for all footlovers!

I really love my Buffalo boots - they're so sexy and comfortable - but since they're pretty old, they need to be well taken care of! I order the boot slave to start by licking them clean completely. He has to lick all the leather parts, the heels and the dirty soles as well! After he cleaned the boots to my satisfaction he has to apply some shoe polish with a brush and then polish them with a cloth until they're shiny black again!

Goddess is hot teasing and pooping in her new jeans True Religion and pink bikini very stinky shit full with beans and corn,smell and fuck her messy ass.

Roxy just came home after walk. She wears black leather combat boots. Her boots are dirty, because she walks in autumn streets, parks, and subway. She tells Alex to clean her muddy boots by his tongue. Her slave licks all dirt from her boots and then swallows it. Roxy also likes how Alex cleans her boot's soles. His tongue is perfectly fits between gaps in her soles protectors. So he carefully pull out all dirt and then swallows it. Then Roxy tells Alex to lie down on the floor and pull out his tongue. Now she wipe her boot's soles on the slave's tongue, like on rug, to make it clean and nice.

4148 - Punishing Slave For Not Having Cleaned Feet and Shoes Right

Mistress Beh and Mah arrive from the Mall with sweaty feet and dirty shoes, use their slave to wipe their shoes and their feet. The sole of the shoes were filthy, the slave had to lick everything without complaining and still thank for being used, then the feet were sweaty she started massaging and then licked sucked her fingers, then she was ordered to wash her feet with a As a punishment for the water being chilled, the slave had to drink the water and then was lashed and whipped by the two Queens. The tied slave screamed in pain, and the Queens laughed

Miss Lilly is wearing her Clavin Klein underwear and she wants to stimulate herself on the face of her slave. She rides his face and rubs her ass and pussy on him. She love to use a slave face to get wet between her legs. A perfect Faceriding Session.

Miss Serena is relaxing on the bed and you greedy foot sniffer crawls to her feet an starts to smell her goddess like feet. Miss Serena has very sweaty and dirty socks, but you love it. The smell of sweaty socks turns you on. Miss Serena ignores you , but show knows you are at her feet and she lets your dream come true. She removes her socks and lets you sniff and worship her bare feet and toes. That's heaven.We promise: (Be a part of your videos) This video is pure fetish. These scenes will satisfy you and fulfill your wishes. Enjoy a fantastic video quality and great views. Our FemdomGold ladies love what they are doing. You can be part of our video shoots and just join us. Our ladies are still waiting for you. Drop us a line.