You are a piece of shit, a freak, a nasty disgusting dog and not just for me, but for everybody in your surrounding and i will explain you why. Get on your knees and listen to me Asshole!

The girls call their doggy to wash their feet one more time. Candy, Hadley and Aurora enjoy in great foot worship. Many zoom on their feet and his tongue.

Sexy Lady Daliah loves to chhoke him with her sexy pantyhose feet. Sexy pressure against his throat

Nothing turn you on more than a nice round ass like mine!!! So get on your knees and beg me to show you my ass and let you worship it slave. Really, a loser like you don't even deserved to worship my ass on his computer screen but since you are paying me to do so, I will tease you for a few minutes, making you edge for the most part and finishing you quickly.This video includes: Ass worship, female domination, goddess worship, sensual domination, humiliation, joi, panty.

Christin and Lady B crushes a Sony and a Nintendo Gamestation with thier High Heels.

Admire and adore My sweet and tender feet. Watch me play with them! I know how you crave sexy women feet and their nylons.

Niles begged and pleaded for his life soooo well that it almost makes Katelyn want to give into him. She tells him no. The reason she has little tiny shrunken slaves like him is because she has a sexuality and a hunger that involves her eating tiny little slaves his size for her happiness, pleasure, and consumption. The game is predator and prey. She explains how the predator might feel a little bad for catching her prey and the process of a Giantess listening to her prey beg, scream, and plead does sometime convince her to stop. But no. Katelyn is strong and has never backed out of eating her prey. She MUST feed. Katelyn then explains something about food to her little shrunken prey. Thankfully, she has food too which allows her to balance her meals. Just one shrunken person a day satisfies her hunger and food takes care of the rest of the meals. However, she MUST feed on at least one shrunken person a day. And it wouldn't be fair for her to release him and choose another after she's already made up her mind, now would it. No, that would not be fair to the others. The others are very joyful that it's not their turn yet. She then goes through with it. She holds little tiny shrunken slave Niles high above her huge wide open mouth and tells him to say the last words of his life, high above her mouth. After her spine chilling last words to him she then drops him into her mouth. She lies back on her couch and squirms in pleasure while rubbing her belly. Her hips sway back and forth, by the looks and the sound of it you can tell how satisfied eating him has made her. Katelyn continues to talk to him even after he's been eaten. She can feel him sliding slowly down her throat! She moans and groans in pleasure as she pushes him down her throat even more! She then no longer feels him in her throat any more and moans some more because that means within minutes, his little tiny life is going to be nothing more than a snack for her body.

SCARLETTE bought a cake for the slave's birthday and, of course, she will use this special occasion to once again degrade and humiliate him. She spreads parts of the creamy cake on her boots and orders him to eat it like a pig directly on them. It doesn't take long before his face is a dirty mess covered with crushed cake and cement floor dust. And the sub-slave, losing all human dignity, has to continue eating his birthday cake under the sarcasms and verbal humiliation of the sadistic Scarlette who's having a great time degrading and humiliating another sub-male.

I know you're a pathetic foot addict, so let Me take you to the next level by having you worship my dirty, smelly Converse sneakers. Wearing my very sexy, revealing purple fishnet outfit, I tease and taunt You with my perfect body as You lick my Converse sneakers until they are shiny clean. I even help You by adding puddles of my spit to the shoes ordering you to lick it all off. Letting you stroke as I put one Converse, then another in Your face, I finally start your cum countdown. At the end, you realize how pathetic you are jerking to my old sneakers.

Miss Gloria is ordered to eat her little friends. She is not so much happy for that. But powerful Giantess near is!

Genevieve is without a doubt one of the most gorgeous example of royalty. This Princess grants the slave the privilege of licking her shoe soles to clean them. Then he has the honor of massaging, kissing and licking her magnificent feet. And he is granted the ultimate privilege of sucking her royal toes. Well, he better be a good foot slave because dozens of others like him are waiting in line to take his place at the feet of 'Her Majesty' Genevieve.

WORSHIP YOUR PERFECT GODDESS CURVES. Every inch of skin I allow you to see get your dick rock hard and should be worship! I know how bad you wanna see my pink spots but YOUR NOT WORTH SEEING MY NIPPLES OR MY PUSSY. My ass and breast cracks are already way more than your pathetic loser eyes deserve to see! WORSHIP AND STROKE IT NOW.

74813 - Jana H tortures him with jeanssitting

Well slave ... you know what I'm going to do to you, don't you, little bitch?! I'm going to sit down on your face - with my jeans ass! Come here and lay down! Are you ready, bitch? Smell my ass ... yeah, just like this! It's really a lot of fun to mock and torture you. Let's see how long you can endure it ... I know how much you like that!

Time for one of your most important training ever my little sissy slut slave. You need to learn how to suck on cock properly. First I want you to fix yourself supper sexy for me. Hair, make up, feminine clothing and shoes. Next, you get on your knees and suck on my strap-on, following my instruction. You need to take it as deep as I tell you to and do a really good job to impress me if you want me to ever turn you around and fuck you in the ass like a little whore. You can jerkoff as you if that motivate you as long as you focus on sucking my cock.INCLUDES: SISSY TRAINING, STRAP-ON, FEMALE DOMINATION, SLAVE TRAINING, FEMDOM POV, COCK WORSHIP

Lola is standing at a lake with her sexy yellow high heels. She is posing and showing you her high arched feet. Nice close ups.

Russian Model Erina takes off her leather boots and rubs her pink smelly socks on a footslaves face....

You want to know what I hold from long-term wankers, how to you? The everlasting virgins, how you who polish her micropenis all five minutes, but the right sex to the real men leave? You will pay a stately sum for the fact that I indicate to you your place and to me for it thank! Time see whether I your small little tail allows to splash... 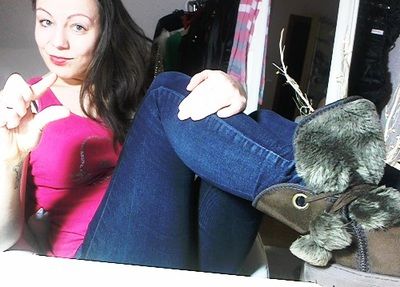