Amber's wearing her light blue jeans and sticks her tasty butt towards your face! She knows well that you're an addicted jeansfan - and that's the reason why she allows you to have a look at everything roundly! She rubs against her jeans and enjoys your peeks! Here we go, come closer and feel free to watch - but no touching!

Goddess Megan will drive you absolutely crazy in this clip as she blows up one big balloon after the next -only for her to crush them hard & pop them using her sexy high heel boots! This super hot playful goddess seems to really enjoy teasing you by blowing up these balloons slowly & stroking them with her hands, kicking them with the sharp pointy toes & heels of her sexy high heel boots & she even rubs them between her legs! One by one Megan steps all over these big balloons with her sexy high heel boots & breaks them using her sharp high heels. This beautiful goddess loves to step on them & crush them hard under her sexy black boots. She even stands on them full weight with both feet & jumps up & down on them! As you watch this clip you'll actually find yourself wishing you were a balloon being caressed crushed & popped by this beautiful balloon popping goddess! 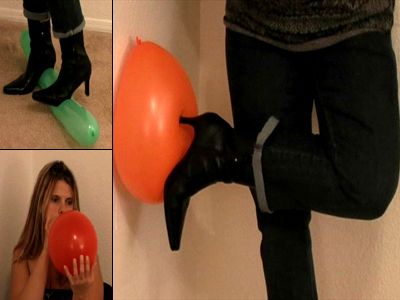 I brought a bag of jellybeans - and I'm going to feed a few to my slave - from my sexy high heels. I step on his treats with the dirty soles and then pierce them with my heels. He has to suck them - and the street dirt from my dirty shoes - while I enjoy watching him and enjoy a few tasty treats myself - only that I eat them like normal people - straight from the bag :-D

Come closer you little loser, I want to see how ugly you are! I have never seen such a poor fellow with such an outrageous mug before! Do you not feel abashed?! That will have consequences! Come across with the money, so I can better bear your sight. With your money I have at least something if I need to borne your presence.

In the kitchen Katrinusic is standing, wearing her tight jeans, a leather jacket and her high heels! Actually, she just wanted to get something to eat, but now she is quite hot on you! She begins to stretch her sexy jeans ass in your direction, bending over seductively! Well, are you still hungry, or do you want to jump straight to dessert? Katrinusic is making you mightily turned on and she knows that you cannot stop looking at her!

A fan has sent us stuff for yet another crush party - well more than 1000 Euro worth of toys will to be destroyed under our sexy boots! 10 small cars, 12 big cars, 6 trucks and a giant tank waiting for their inevitable destruction. Madison and I take our time, crush most of the toys one after another - and join forces to crush the big ones. After everything is destroyed, we call for our slave, make him lick the soles of our boots and then take our boots off - to shove our sweaty socks on his nose!

Although it was scheduled, Clarissa was absolutely not in the mood of shooting this video. She wasn't into kneeling in front of an other girl, smell her stinky socks and let her humiliate her with the sweat of her soles. But Eryss already stinked her feet up, wore her socks for two hot summer days and we just can't let her feet to sweat in vain! All the salty sweat must be licked off, there is no excuse! So, despite her reluctance, Clarissa must sniff and taste sweaty feet once again!

A fan has sent us stuff for yet another crush party - well more than 1000 Euro worth of toys will to be destroyed under our sexy boots! 10 small cars, 12 big cars, 6 trucks and a giant tank waiting for their inevitable destruction. Madison and I take our time, crush most of the toys one after another - and join forces to crush the big ones. After everything is destroyed, we call for our slave, make him lick the soles of our boots and then take our boots off - to shove our sweaty socks on his nose! This is a non-exclusive custom clip for a fan.

Oh toilet slave, I have something for you! A nice big load of shit! You want to eat all of that shit out of my ass! Look at my big, beautiful ass! It's so juicy and sexy! You want me to squat right over you and push out a big, fat load of shit for you to eat! Beg for it! Beg for my shit and I'll feed you! I know you love my shit! You're so pathetic, my toilet slave! Begging for my shit! You want to eat every last drop of my shit don't you!? If I let you eat my shit, you'll have to eat it all! You'll have to chew and swallow every last drop! Can you do that!? You better be able to! Because here it comes! Open wide!

My slave was outside emptying the bin. He came back into my dungeon with dirty feet, not a good idea. I have warned him about this before, and told him to wear something on his feet when outside. He is therefore going to receive a good caning to remind him of his responsibility. I have his feet well exposed, and as I begin with some stinging strokes he is already in great pain. I continue giving him his punishment until his squeals get more frequent and louder. It's a great way to help me relax, and teach my slut obedience as he suffers with every stinging stroke of my cane...

My G/F Christine & I are lying on the floor watching tv. We both wore our sneakers without socks today & our feet & shoes STINK. This LOSER crawls into the room & waits for us to kick off our shoes & then starts to sniff them & touch himself. How Pathetic! LOL.. Well our shoes smell so strong the BITCH loses all control & makes a mess. HA HA

My feet with the red nail polish are beautiful, but in my while sandals, they are leaving nice heels marks too.Be present, when Pete puts them on and off my feet. *no audio*

A femme fatale( BLACK WIDOW) is a mysterious and seductive woman(so true) whose charms ensnare her lovers in bonds of irresistible desire, often leading them into compromising, dangerous, and situations.A femme fatale tries to achieve her hidden purpose by using feminine wiles such as beauty, charm, and sexual allure. In some situations, she uses lying or coercion rather than charm. She may also make use of some subduing stuff such as sheer gloves, hpsiery sheer body , sexy legs, sensual lips . Brainfucking eyes..Her ability to entrance her victim with a spell was in the earliest stories seen as being literally supernatural; hence, the femme fatale today is still often described as having a power akin to an enchantress, seductress, vampire, witch, or demon, having some power over men.Whats Goddess Celine ' s secret power to enslave Her victim??Lets see

I know you struggle with your financial domination addiction. You have spent yourself into debt, approaching total financial destruction. I'm going to help you with your recovery, to de-program your fetish. With a combination of audio and visual cues I will reduce your desire to SPEND over and over again on beautiful bratty women.

66373 - Making him lick my muddy boots while trampling him

My slave opens the door for me and I immediately order him on the ground. I step right on his white shirt with my muddy boots and then make him lick the muddy boot soles while I stand on his chest. While my boot soles get cleaner over time you can see his tongue going dark brown quickly :-D After he cleaned both boot soles to my satisfaction I stand on his face and head before I rip open his shirt with some hard kicks - making the buttons fly all over the flat and destroying the shirt for good!