This is easily one of the most sadistic clips that Stella Liberty and I have ever done together - We tie Our slave to his chair and use one of Stella's new toys, a ball vice that slowly crushes his balls the tighter you screw it on! While he's coerced to endure that pain We use clothespins to inflict some pain on his nipples and then eventually start clipping them to his cock and balls too! And of course, when We decide to take them off, We do it the only way We know how - with whips! We wanted to play with this poor slave for much longer, but the bitch can't handle it - he begs for mercy even sooner than We expect, so, being the merciful Goddesses We (sometimes) are, We end the session, leaving him broken and exhausted.

I've thought of a really cruel game for the slave today - I ordered him to strip down naked and explain the rules to him. He has to beg me to slap his face - continuously - and if he doesn't beg enough - I'll kick his balls! Of course, he knows what my powerful legs will do to his balls - but he also knows how much my slaps will hurt! He begs and begs and begs ... and gets a ton of slaps to his face - but when he only stops begging for a second, he gets a fierce kick in the balls - sending him straight to the ground every time! And once he gets up - the brutal slapping continues. In the end he's close to crying - and I've had a lot of fun! I think I'll play this game a lot more often in the future :-D

Ahhh the joys of a good old fashion FUCK YOU while lounging in my satin Asian robe & latex. You deserve nothing but the best of fucks while licking my chunky Gothic heels.

073_Slaps and spits fly to the slaveÂs face! The slave lies tied and receives burning bangs from Mrs. Mimi. The Blonde girl won over the slave and forged him to make humiliated once again. The entire face of the slave is red from blows and wet from hot female saliva.

I need to practice my CP so I persuade my footbitch into letting me practice, and taunt and tease him at how pathetic his tolerances are as I dance around and torture him.

130694 - N24_Miss Bertie spits on the slave, she slaps him on the cheek, sits on his face and even tramples and jumps

Now the young burglar need to be punished.The mistress walks over her with her boots and tramples her on legs, body, hands. She teaches her not to steal any more.

Finally I managed to find out where Batman is between me (Catwoman and Batman) today we must decide which of the two is the strongest super hero, with my ability I can suddenly tie him with my strings and immobilize him, I tie him up with arms behind his back, and so Batman will not be able to move or defend himself now, I want to start with a good show of strength by making him do push-ups on his knees to prove his resistance and while he does so I put all my weight on his back to put him in difficulty, I want to remove all his strength, we end up FIGHTING on the bed, at a certain point I decide to take off his jumpsuit to make him even weaker, and to take off my boots, to be able to touch him with my feet, then I take my oil magical that intoxicates him even more and I start to put him on his cock until massaging it with my feet, Batman tries to get up m allormai all his strength and energy is over .... his cock between my feet has it made to lose, Batman is defeated .....(video in Italian)

This will be a tough challenge for the slave. Queen Hanna and Mistress Jane have bet between themselves under whose jeans ass the slave can hold his breath the longest. Mistress Jane takes a seat on his face and off we go! Queen Hanna counts how many seconds he doesn't breathe for. That was pretty good, but she's sure he can do that much better under her. After the slave has reached his pain threshold under mistress Jane's ass, Queen Hanna sits down over his mouth and nose. How long will the slave endure it...?

N23_*** Face Slapping & Spit *** Sensual Face Slapping With SpitShe's training this slave to take some spit and face slapping with a smile.She reminds him as she sits on his chest slapping him and caressing him how much he enjoys it! As he should!!!

I nearly lost an eye during this shoot, and Amina found it to be quite funny. She stepped directly on my eyeball with the tip of her heel fast and hard, luckily my eyelid was closed. Still, I had eye pain for days after the shoot. At least she had fun though :/ 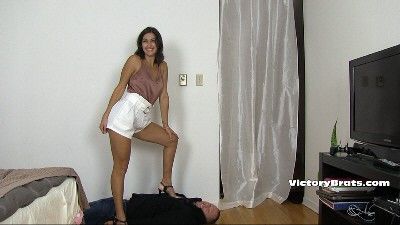 Mistress Mary has got a huge collection of shoes Â all kinds of shoes that fit her sexy little feet so fine. The hottest part is that every pair is a real object of worship for MaryÂs slave Â a young and submissive foot fetishist whom she keeps in her place just for fun. It feels so good to have someone licking on your tired heels and cleaning your dusted shoes after a hard working day, you know.

Look at you! Little silly man laying in the mud, naked and ugly, lokking up to the beautiful giantess. I will spit on you , verbaly humiliate you, crush you, stomp on you, trample you and laugh at you !!! What of you ridiculous joke will be left over ??

I brought along the slave girl - and today I'll put her to her tough test. I'm going to trample her chest under my sexy bare feet - and I'm not going to give her any time to rest. I trample her hard and even so some bouncing and light jumping on her chest. Of course, she can't really breathe with my full weight pressing down on her chest - so when she needs to breathe, I step down on her stomach for a few seconds before going back on her chest. She's in great pain as I trample her tits and squeeze them flat under my foot soles - but she's going to endure it for a little longer - I want to test out her limits today! This is a non-exclusive custom clip for a fan. If you want me to do a custom clip for you, send me an email to marissa@madamemarissa.com!

Hey, you little bitch! You like my sexy high heels, don't you? Do you want to lick them? Do it! Lick the sole and suck the heel! You want to take off my shoes and see me barefoot? Come, I will show you my feet. Look how sexy and perfect they are. You will now give them a good licking too, of course. First the sole and then also between the toes. I want to feel your tongue on my feet From now on you are my foot slave! You will always lick and smell when I want you to. To start your slave education I have something special for you. You will eat these little gummi bears, but first I will prepare them properly with my feet! I press them between my toes so that they take on a nice new taste and smell! You will take them in your mouth, chew them well and then swallow them! Do it now! Take them from my feet straight into your mouth!