Goddess Sheila. A goddess like me always has a foot slave at her feet. When I relax in the morning, I put my feet, which are in pink fur slippers, on the face of my foot slave. His face is just like dirt under my slippers, so he has to be happy with this place. He can of course lick my slippers clean. He has to clean the sole completely with his tongue. The insoles smell like my feet. Of course, the foot slave also has to lick the foot sweat from the insoles. I take my cell phone and shop in time at the expense of my foot slave. The goddess buys something beautiful and the slave has to lie under the goddess' feet. That's right! That is a law of nature.

I receive daily requests and wishes for the most diverse fetishes. Also in this case a fan wrote to me whether it would be possible to give me these special rubber gloves, to then record them in videos... Today my object is milked with the gloves and a lot of oil from me ... All the sauce is spread on the black rubber. I like it, it's fun for me ...

Now that itÂs spring, the streets of the city are so damn dirtyÂ ItÂs good that these two young mistresses keep a humble shoeshiner leashed in their place Â the shoeshiner who never refuses to clean their boots with his tongue. Of course, this is not the only kind of services that this worm provides to his dominas Â they are also free to use his nude body as a door mat whenever they please.

Stupid bitch took my favourite scrunchie! Maybe it's crazy that I broke into her house to see if she had it, but it's only crazy if you're wrong right? And she did take it! She's owed a little revenge. My stuff is mine, and lying about it is deserving of a proper punishment.I pop my scrunchie on my wrist and strip off my dress. I've got my eye on the sink and a plan in my mind. I plug the drain and fill it up with water for the best effect. When I hop onto the countertop and fart a couple times onto the water, it bounces off a little echo-y and the stink is terrible. Perfect.I pee into the water and fart again then I start pushing. A big, hard, constipated shit begins to push out of my bum and I wiggle and adjust my ass until the big log drops and plops into the sink. Let's wipe! I make a pile of dirty toilet paper on the bathroom vanity counter. Yuck haha, the smell is awful but it's perfect.I don't feel done so I keep pushing and squeezing and get out another couple nice sized turds. Whew! I had so much backed up! I wipe more and more and it adds to the filthy pile of tissues. A nasty mess for a nasty friend. Good thing I'm not cleaning it up. Bye!

Emma decided to play a little prank on chad. She called him into the bedroom a few hours after she had thanksgiving dinner, and had some pretty nasty gas. She set up the camera on tripod and explains to the viewer what she has in store for chad. She lays on the bed yelling chad's name until he came into the room. she then told him to put his face in her ass, he was shocked but did it anyways. Then the fart session begins. Emma lets some pretty loud and nasty smelling farts go, chad's face into her ass him to sniff it. She kept telling him to sniff harder, and pulled his face deep into her ass making him smell her nasty farts. She still had her jeans on, and decided that he needed to really get in there and sniff, so she rips her pants off and only has a thong on, still ripping farts. She keeps pulling his face into her ass, him to take deep breaths and suck in all the stink, spreading her ass cheeks. When all is said and done, she looks back and says your lucky I have no more gas left. She then pulls her thong to the side and him to lick her asshole clean. When she got up she gave a secret thumbs up to the viewer with a big smile on her face showing that she got him really good with her ass sniffing and farting!

This clip shows how Mistress Natalia uses her slave in everyday life. She just returns from a walk and saw that her lazy slave is lies on the floor and dreams instead of working hard! Mistress Natalia needs a rest for her feet, because she walked a lot today. So she kicks Alex and then uses him as a comfortable and warm footstool while she reads a book. Then Mistress Natalia uses slave as a living chair and sit on his back and continue to read a book. After that she decide to change her footwear. Mistress Natalia puts on a wedge sandals with a thinner heel and then tramples Alex with her full weight (70kg / 154lbs). She also stands only on one foot and then flattens slave's nose with the sole of her shoe. But as she is really tired this torment wasn't too long. Mistress Natalia again sits on the slave, but now on his belly, and continue to read her very intresting book...

Today potty i come urgent in the bathroom with a plate i remove my pants and panties i come over the tub and pee first shit after of course in the plate to make it full , i give you a taste of the shit and after spit in it for more spice and i feed you by fork , enjoy! 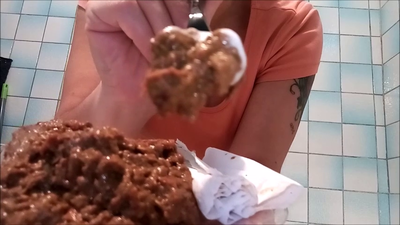 My footstool is allowed to crawl and be useful.Get me my leather boots from Manolo and put them on.Now I expect your full commitment. Your tongue will remove every speck of dust and make my boots shine!By the way: Your face is a perfect seat cushion * laughs *

Haha, it seems the whore was completely ruined! Without mercy through hardcore blackmailing by ME. He really had countless chances and she begged and pleaded like a little Beta cunt! BUT: WE had a deal - WE had AGREED! Who does not keep to it, which shows me by his behavior that he does not take me seriously as Mistress, thus not RESPECTing me and THAT has the consequence that I let actions speak! What do you think what Micha has to do now?

I've put the slave in the smotherbox and bound his hands to the box as well - this way he's completely helpless and can't defend himself - when I sit down on his face and smother him under my jeans ass. I mostly ignore my human seat pad and answer some messages on my phone - while the loser's panic rises as his oxygen runs out. I grant him only short chances to breathe before I sit down again and the facesitting continues! I just love how the smotherbox keeps him in place ... holding his face completely steady ... I could almost forget that there's a human under my ass ... :-D