In this beautiful clip, Tamara wears a very elegant pair of shoes. We can see her crushing the red berries with her shapely feet. Could a rosehip have a better day? Now you too can imagine yourself as a berry under Tamara's feet.

Tamara stands on top of a milestone again. Now she is stepping on pine cones, which do not give in easily. In her green sneakers, Tamara stomps more and more wildly on the pine cones. Some even fly far away. Some enjoy life under Tamara's sweet soles.

Nadia and her friend 'Innocent Girl' drop in unannounced at my place past midnight for 'Anime Night'. Of course this is a Girls Night Only so I was face-stuck between their butt cheeks with Toilet Paper duties. Eventually one of the girls decides to make herself comfortable sitting on my face as they both continue to chat, laugh, and binge on Anime until sunrise. The girls were moist with sweat and the smell of their bottoms was absolute cruelty to my nostrils. It's no wonder they were laughing so hard.Please Note: This is 'Clip B'. The clip description tells the story of all parts. A 'Complete' version will be made available in the future. This is real amateur lifestyle femdom that only Masorotica Productions can deliver. 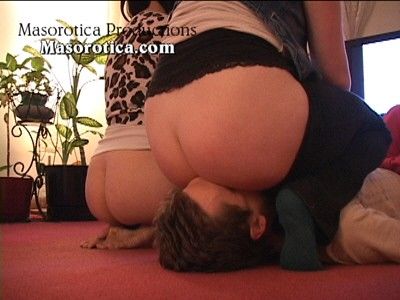 So, you sent me your 3 favorite cuddly toys - and you know what these fleecy toys are best used for? To clean my dirty shoes and boots! Does it hurt you to see how one after another gets trampled under my boots? First, I use my flat Mustang ankle boots, followed by a pair of boots with deep, mud-covered tread and thick heels and finally under my Gabor ankle boots ... until they're completely covered in dirt and fulfilled their destiny as my doormat. But you didn't think you'd get them back like this, did you?! For the grand finale, I put on my LeSilla ankle boots with extreme thin heels and I'll use them to cover your beloved toys with holes! This is a non-exclusive custom clip for a fan. If you want me to do a custom clip for you, send me an email to marissa@madamemarissa.com!

My patience with this slave is at its end! I drag him behind me and make him thoroughly lick the dirt from the soles of my sneakers with his slave tongue. This way he knows there are better things to do with his tongue than to bore me with his talk. I stand on his out of shape body and wipe my shoes on his tongue. Why I do this is clear. I always wants to see my slaves make a special effort! Licking soles, trampling, facesitting in jean... Whatever it is, I love to make it as uncomfortable as possible for this slave.

ITALIAN LANGUAGECUSTOM REQUEST - She dressed as she wants, the slavecompletely naked.She called him her slave because she wants to practice achieving perfection in kicking the balls.The slave knows nothing about it and will tell him while she gives him a footjob.For the footjob I would like you to be on the bed with her sideways to the slave and make him squirt with her beautiful 10 fingers.So during the footjob she reveals her desire for her to the slave: she wants to reach perfection and get to give him 50 perfect kicks in the balls.She then has the slave positioned in ballbusting position.She then begins to kick him in the balls, but the count must go on only if she is really satisfied with the kick she has just given, in terms of style, of the noise of the balls (in this regard, orders the slave not to emit groan or the count will not go on), etc, in short, if she considers her kick perfect then she will count it, otherwise not.All this until the perfect number 50 kick is reached.Reached the goal, the last of very powerful kicks to really hurt and send the slave to the ground.Finish with victory pose satisfied with her perfect ball kicks.

Valeria walks through the dirty parking lot to her car. The parking lot is not the cleanest place, there is a lot of garbage, dirt and cigarettes. The girl talks on the phone and walks in the mud because she knows that there is a slave, a "shoe mat", who will eat all the mud from her boots. Valeria finds a beggar near her car, a guy in dirty clothes and barefoot, and he asks the girl to eat. Valeria is merciful, so she decides to cook a special dish for him. The goddess throws an old sandwich on the floor, spits on it and destroys everything and smiles evilly. When Valeria has finished pressing, she offers her boots so that the slave can lick them from dirt, cigarette butts and an old sandwich. She laughs at him, insulting and humiliating him verbally. Finally, she orders the slave to lie down and clean his boots, standing on top of him and putting her boots on his chest and face. When a beggar asks for a drink after such a heavy meal, she spits in his mouth and orders him to swallow. At the end, the Goddess gets into the car and closes the door, leaving the slave in his misery.

Miss Elsi: I love having a human foot rest. This morning I press my nylon feet into my slave's face while I take the first drink. He should smell my nylon feet and inhale. I play with my toes around his nose. Yes, inhale the scent of my feet. Is that your dream to be my human footrest too? Then you could also enjoy my big, fragrant feet.Enjoy the view now. This is what it looks like when I use my slaves as a human footstool. My feet always look fantastic on a slave's face. My foot sweat spreads wonderfully on his face.

160003 - Languid smoking with vibrators in cunts

Miss Catdeluxe and Lady Stefanie together set Stuttgart on fire and of course everything was filmed. So even one like you can catch a little glimpse of our time together. What is it actually like to be a miserable figure without cash? We'll find out today! The slave has not paid any of either pair of Loubs, yet he profits from it. We don't like this behavior at all and let the sub feel it clearly. Every time he touches our luxury high heels and feels just a little too comfortable, we bring him back down to earth. Because he is a luxury parasite and just a loser for us.

My slave is full schmuck and my toilet. Lick my ass, relax me, make me feel good, make me want to shit in your mouth. Eat my smelly shit, all the shit that fall into your mouth and lick, suck, ask for more. You're dirty motherfucker. Lick my ass, lick my feet, lick my shit, there's your place, my shit is your meal.

Goddess Kalee is a new asian model. She is 20yo, and 168cm (5'6") tall, and 55kg (121lbs) weight. Her footsize is 36eu (6us). She just returns home and orders the slave to lick and clean her dirty street boots. As a warm welcome Alex licks Kalee's boots very carefully and with a lot of enthusiasm. Her boots are really dirty, especially soles, with a lot of sand and small stones on it. You even can hear how sand crunches on the slave's teeth when he tries to chew it. Poor guy... but Kalee's boots must be so clean and shiny so she can walk in them at home.Duration: 6min 45sec

Do you know what it is like to have a woman shitting in your mouth, have you had this experience? In this clip I poured my wonderful smelly diarrhea in slave's mouth, and did what he likes best, I felt my shit as I sit on his face, a pig that loves to get dirty in my shit, there's nothing better.