That's supposed to be a dick? That's just hilarious! No matter how much you're turned on, it doesn't get bigger than this? Well, if there's nothing in the first place, it can't grow I guess! And there's nothing you can do about it ... your life is worthless and pathetic with a dick like this - and you're never going to be able to satisfy a woman. And even jerking off is almost impossible for you! You're just a loser with a ridiculously small cock!

CUSTOM REQUEST - A male slave is kneeling on the floor when you enter the room. He greets you by licking your black high-heel boots thoroughly. You make him turnaround and tightly tie his arms behind his back. After some face slaps you defecate onto a plate and hold the plate under the slaveÂs nose to inhale the flavour of your caviar. With your gloved hand you take some of your caviar and put it into the mouth of the slave. Afterwards you duct tape his mouth and make him crawl before you and give him some corporal punishment. After some time you remove the duct tape and control if he has swallowed all the caviar. Then you make him kneel up again and continue to feed him the remaining caviar by shoving it into his mouth with your gloved hand. To make sure he eats it you press your hand over his mouth, till he chewed and swallowed everything. At the end you put him on leash and walk him like dog on all fours out of the room. Please spit at him and slap his face now and then and make fun of him and ridicule him during the feeding process...

Produced, edited, directed by Goddess Natasha. After a long time I'm finally back but my sub doesn't look very happy to see me again. Watch his reaction and tell me what do you think

As my slave itÂs your duty to be of use for me! But thatÂs that?! YouÂre just a dumb fool! A slave fool that needs to be instructed first! Come closer and look whatÂs wrong with my shoes. Yes, theyÂre way too dirty! Get your tongue out! YouÂll lick them clean now, and youÂll start with the pair IÂm currently wearing. I just walked through some dirt with them. Fulfill your slave duty and lick them clean!

Even a creature as simple as a toilet slave can used for multiple purposes.For instance, this slave is not only a convenient and portable waste disposal device, it can also be used as an ass massager. I allow the thing to worship my asshole with its tongue. The sunshine highlights the translucent beauty of my skin and the nuances of my firm and toned ass as the slave worships. Ass addicts masturbating along at home will appreciate the way the sunlight plays upon my flawless ass as I kick the slave. My ass gets so close to the camera it is almost as if you are there. Then, completely naked but for my bra, I mount the table in a squatting position and you can see as the slave worships my asshole from the front and behind. The view provided of my soft, moist and unattainable pussy lips is incredible. Finally, I use the slave for what it was made for. I deliver a massive load in several parts and you get to see it from several angles. My aim is perfect and the shit drops from almost three feet directly into the motionlessly obedient toilet slaveÂs mouth. The devastating mess on its face is the final testament to my power and the slave's obedience.

I want to have some fun by smothering the slave - but this time I'm going to use my feet mostly! I order him to lie down next to the couch and then immediately press my feet - still in white socks - firmly on his mouth and nose. He's struggling for air, but he won't be allowed to breathe until I decide to relieve him! I try out some different positions and also take off my socks later. With my dirty socks stuffed into his mouth it's even easier to smother him with my big bare feet!

After spending the night dancing at her local club, Suzy comes back Tipsy, finding her slave sleeping peacefully.That ends abruptly after wakening him up, slapping him a few times, and describing how sweaty and smelly her feet are, to which she lays on top of him and begins to brutally smother his face with her bare feet.Her poor slave almost gags a few times due to the smell, and Suzy holds his arms in place to prevent him escaping.

I'm starting to shit. this I do in my pantyhose. my shit can be seen close-up. tights are full of crap. I am pleased with myself. I take off my pantyhose and show shit close up. I smear shit on the ass. this is a super sensation. 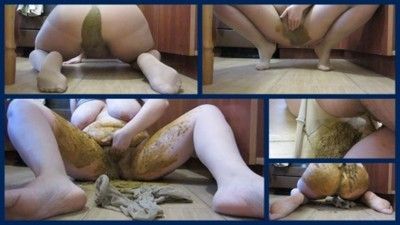 So, you want to fight me, weakling? Did you really think that through?! Let's see! Oh, does it hurt when I kick your face with my big bare feet?! Come on, you don't even try to fight back! And you're shrinking! That's going to make it even easier for me to beat you up! You're barely coming up to my tummy by now ... why don't you at least try pushing me back?! Oh, you're too weak to even move me by an inch ... and you're shrinking further! Now that you're barely coming up to my thighs I'll kick your face with my knee instead! Hopefully now you understand that you're totally inferior to me, weakling! This is a non-exclusive custom clip for a fan. If you want me to do a custom clip for you contact me at marissa@madamemarissa.com!

As my slave itÂs your duty to be of use for me! But thatÂs that?! YouÂre just a dumb fool! A slave fool that needs to be instructed first! Come closer and look whatÂs wrong with my shoes. Yes, theyÂre way too dirty! Get your tongue out! YouÂll lick them clean now, and youÂll start with the pair IÂm currently wearing. I just walked through some dirt with them. Fulfill your slave duty and lick them clean!

Miss Lilly removes her dirty socks and rubs her sweaty bare feet on her slave face ... She oders him to lick and sniff her smelly soles .. he is her personal human footstool ...

I put this tiny girl under the soles of my Hunter boots with some zip ties and then start walking in the parking lot. There's an excavator nearby and of course I've to climb up on the tracks. With the hard metal below and my full weight coming down on her little body she's already suffering massively. Next I walk on a trail into the woods - literally dragging her through the dirt until I find a stinky pond in the woods - of course I've to get into the stinky mud and water - and back on the trail again! The little bitch looks pretty done already, but I've to walk back to the car ... somewhere on the way back the zip ties rip and I've to pick her up to carry her back to the car ... but her punishment isn't over yet ... no way I'm taking her with me into the car as dirty as she is ... I just put her behind the tire of my van ... get in and drive over her a couple of times until I'm sure she's done ;-) This is a non-exclusive custom clip for a fan. If you want me to do a custom clip for you contact me at marissa@madamemarissa.com!

Finally it's spring, nice and hot weather. It's perfect time to take a long walk through the city and enjoy the sun. But for that it's good to have the right shoes. Daniela took her new shoes out and they are killing her. Her feet are sore, they hurt and she can't take it anymore - it's time to walk the rest barefoot. So she takes off her shoes and walks and walks and walks...for almost 2 hours she walks back to her flat, barefoot, and her feet they are...well they are pretty damn dirty now. It would be good idea to take a shower right away but Daniela is so tired...if only there was someone to wash Daniela's feet for her...but there is no one to do this right now. So she rests on her sofa, put's her feet up and relaxes for a while but then it eats at her that she has such a dirty feet in her home and starts to wash them up with kleenex but boy, those feet are really dirty and to clean them like this it will take some time...if only someone would clean them for her...in any way possible...

I punished and humiliate toilet slave again. Today I'm going to shit directly into his mouth and will use him like a live toilet. He will moan for me to stop. But I have eaten good today and will shit a lot!

Ester makes living as a pizza delivery girl. It's not a great job but it's a job. Now she's on her way to her last customer today. She knocks on the door and this guy opens, speaking Italian to her and taking the pizza. He checks the pizza out but according to him something is wrong and he don't want to pay up. Ester does not understand a word he's saying but she's starting to be pretty annoyed by this guy. She wants to go home but not without her money. She confronts him but he's just a little brat who deserves some education. Especially in the area of "how to behave in front of a woman". Ester has enough, she pushes the guy and it turns out he's just a bratty looser. He drops down right away like an apple and immediately it's clear who has the upper hand here, who is the boss here. Now for the education - they maybe don't speak the same language but there are other ways how to educate a man. For example if you catch his hands and press your feet in his face so he can't breath nor fight back, that will educate him in how to treat a woman. Also when you stick your foot in his mouth and make him gag he will pretty soon understand that the woman is a boss, not him. That the woman is a goddess which he will worship. And Ester does just this. When he's broken and in her control she makes him worship her, worship her feet. Lay before her, at her feet, kiss them, massage them and lick the dirt of them. That's where man's place is and he will learn it right now.

The title says it all. You totally fell for me :) You can not do anything without me - absolutely nothing! You only have sex when you think about me. You only get a stiff cock if you paid me, Paypig!