This time we have again something special for you! Hot action in the mud, with boots and barefoot! Dark Mistress guides her right through the mud to his feeding bowl. There she scrunches his food, and the slave has to lick it out from the bowl and from her boots. After some kicks in his balls, she guides him to a little lake and pushes his head with her boots under the water and lets him drink. She pulls him back and begins to trample him and to torture him. But that doesn`t suffice her, she puts the ash from her cigarette in his mouth and pushes him in the mud. There she walks over his hands and pushes his head in the mud. Then he has to lie with his whole body in the mud and gets trampled. After taking off her boots, she muddies with her feet in the mud, lets her slave lick her dirty feet and again tramples him! The slave isn`t only handled like mud, he looks also verry muddy. After he got again a kick in his balls, Dark Mistress sends him away ans goes.. For every fan a total must!

Today im in my office. I think its to warm today and i pull out my clothes. Ahhhh no its better !!!


In this clip I am having a lot of fun. You can see my dirty slave walking in the park while he is wearing these ridiculous looking boots. We are passing some women sitting on a park bench and I order my slave to tell them that he likes them. After that he has do kneel down in front of them and he has to imitate a mole and you have to see that. He looks so stupid and I am laughing about him. After that he has the honor to receive a lot of hard kicks into his dirty balls and ass. Later we continue to walk until we reach another bench and I am taking place on it while my slave has to kneel in front of me to lick the dirty soles of my boots. At the end of the clip he gets even more hard kicks into his balls, so I can train my legs and then he is left alone until I come back.

I'M NOT AN ACTRESS, MY DOMINATION IS ABSOLUTELY REAL!More at: www.lifestyledivaclaudia.com

At first I thought you were in love with me but then I realized what happened, YOU HAVE A FETISH FOR MY FEET! After waving my perfect size 10 pedicured feet in your face you have been fantasizing day and night about sucking on my tasty toes, haven't you??? Well, Heres to adding fuel to your already big addiction hehe. I am teasing and torturing you with my feet right in your face. You will be even more addicted after this :) A special video dedicated toDONNY who is in love with my feet. The sexy heels were a gift from him. All foot fetish boys buy it!!!

Take a walk with me as I go check out the progress on my new house thats being built! The camera focuses mainly on my black leather boots! They are so sexy! Listen to them hit the ground as I walk. They get so dirty Luckily I have boot bitches to lick all the dirt off! I walk back up to the house and make you clean them really good! Perfect boot worship POV video!

Thanks to my brand new camcorder you can now get up close and personal as my ass slave! Get Closer and Closer so you can smell my perfect round ass. I know how much you dream of being my personal ass bitch. Now heres your chance! This is definitely my favorite of all my ass worship clips! BUY NOW!

Kneel and worship my long Goddess legs slave! I know just how to manipulate your weak submissive mind. You dream of kneeling in person and being able to worship my perfect long legs and feet! I tease you in my new Wolfords black silky thigh highs and then strip my long legs and show you how to massage lotion onto them properly. I flash my hypnotic Goddess stems in front of you and you cant help but crumble at the sight of them. Worship them slave!

The sisters are very angry after a shopping tour. The boots they wanted to buy were sold out because they wasted too much time on their damn slave. Of course he has to suffer for his mistake, side tracking them too much! So when they come back home they immediately force him down on the ground and make him kiss their boots. Then Layla wants to use him as her human pony, but that's not hard enough for him so Jane joins her and they both ride on their weak slave boy until he's really exhausted. When he breaks down they force him to lie flat on the ground and start to painfully trample him with their sexy boots. In the end he has to serve them as a pony before he finally collapses and they send him back into his corner.

5610 - Lady One has OTHER barbecue tongs

Lady One uses her black Buffalo 24400 on the grill for turning the sausages. Accidentally one of them comes under her despiteous boots.

Melissa is sitting at the desk, smoking a cigarette, resting her booted feet on the desk. Watch her smoking while she`s showing her high heel boots....

I just got these super sexy super tight SUPER EXPENSIVE yoga pants from my biggest fan superfan! These tight pants looks so good on my precious ass! So, I thought I would tease you ass worship fans with my perfect round 41inch butt in my new pants! I love how my ass can easily have you ass slaves weak and ready to shell out the cash to spoil my ass! Enjoy this sexy tease while I show off my new pants and shake my ass right in your face and humiliate you!

By special request I received these collectors editions of Sports Illustrated in the mail and was asked to crush and destroy some of your favorite super models and what a fun clip this turned out to be! Destroying every page from your favorite magazine and reminding you who owns you now! Watch me trample these skinny bitches with my dirty feet!

Barbie and Lady Jee are dancing on white chocolate with her Buffalo boots.

PART 3 of the video , KATHY totally dominate her opponent ... 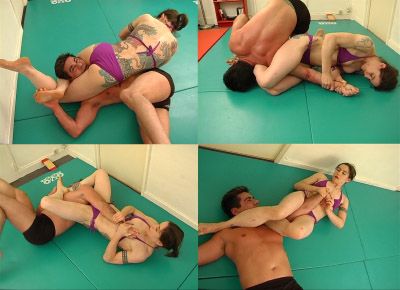 Gina is standing on a steel platform and shows you her fantastic babyblue Santa Cruz sandals. Watch her walking up and down with the metal stilettos making a loud sound on the ground! Great close up scenes of her nyloned legs, soles and toes when she shows you the flexibility of her feet and plays with the shoes!

Today Xenia punishes a bad guy, she tramples, smothers and kicks him till the limit... COOL FREESTYLE VIDEO HD FORMAT

Wow?This an incredibly hard fought evenly contested 30-minute submissions wrestling match between two of the very best lightweight session wrestlers in the world, Xana and Robin. The women weighed in about the same, with Robin enjoying perhaps a 2 inch height advantage. The women are clearly feeling each other out early in the match, as they trade holds and controlling positions, but no one comes close to obtaining a submission. At about 8 minutes into the match, the women have competing ankle lock submissions on each other, but one woman has secured her hold better which causes her opponent to writhe in pain and tap out. After the first submission, the woman who lost that first fall came out with a fiery intensity that both fighters exhibited throughout the balance of the match. A submission to even the match comes less than 90 seconds after the first fall. However, the fighter who submitted in the second fall comes back less than 40 seconds later with a brutal body scissors that has her opponent literally screaming her submission. Some additional falls are recorded by both women in this epic struggle for wrestling supremacy. It is clear the women are giving it their all, as you can hear their grunts and groans and see them visibly flushed due to their extreme efforts in this match. Interestingly, you can also realize from watching this match that each women was clearly enjoying themselves, pitting her skill and strength against her highly skilled opponent in an attempt to wrest the match from the other. It is an incredibly closely contested match, which either woman could have won, and a match that certainly calls for a rematch between these two incredibly attractive, sexy, and skilled grapplers. There are brief interviews before and after the match with the two women, with Xana?s comments translated into English subtitles at the bottom of the video. It is clear after this epic struggle, the two women left with a new found respect for her opponent. Any fan of true competitive submission style grappling will thoroughly enjoy this match, which is destined to be a classic. 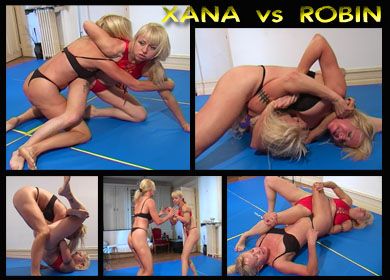 A complete table - prepared for lunch - is treated in Lady Light style...

Lady One walks her way and crushes down everythings, whats in that way.