Now is clear for the toilet slave what awaits him. Lady Lucy Delunatic takes her glove which is smeared with her shit and stuffs him without hesitation into the slave mouth. He should lick it all. It does not seem that taste him well. It is more a torture than a pleasure for him. No matter, Mistress Michelle has to shit now and the key disappears very quickly in the pile of shit. The toilets slave now has the task to find the key. With his tongue he looks for the key in the pile of shit. He has to do this with the nipple clamps which hurt him more and more.

How funny! I am riding on my half naked slave through the snow, which prevents that his knees don't hurt that much, smile. For a real refreshment I push his face into the snow with my boot. I love these mean sadisitc games!

69254 - Sex slaves licked the king and queen of the junctio

Slaves tongue licking the queen's feet and the big clitoris. King to lick the penis, the king and queen have sex, slave lick their nakedness. The queen took slaves slaves to go to the bathroom to drink urine

KV-NS-Snot-Save up Clip! Here you see, shit in the mouth, mouth piss and snap into the mouth, scenes, from the full movie: Mistress Rosella! Living toilet filled with shit, piss and spit! 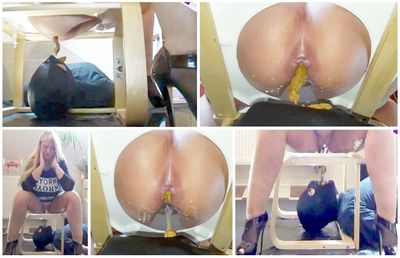 While i enjoy my cigarette. You are bothering me again with your lowly existence. Its time for some realtalk what i feel about you, what i think about you. You dont like smoke well you gonna enjoy it when im blowing thick clouds of goddess smoke in your face. After all its smoke that is coming out of my sexy mouth. Thats how far your addiction already got.

Diva Staxxxâs Bowels werenât the only thing on the move in these three clips!!! Enjoy these reality series clips as Staxxx begins at Mickey Dâs. Looks like breakfast ran right through here. She mentions âI almost shit myself!â before pulling her pants down. Then of course she discovers there is no TP in the dispenser and has to scramble to another stall for a roll before immediately dropping a huge load in the bowl!! In the second scene, we see Staxxx out in the streets as she mentions she just drank some Cappuchino and smoked a blunt. Coffee and Smoking are natural diruetics and of course she damn near shit herself again!! So enjoy as she pulls into a gas station and walks through the store to the bathroom. She races to prop the camera then releases another wet, FUNKY load at the gas station. She tells the funny story about how she was gonna go shit at the same Mcdonaldâs as the first scene but it was closed!! So she had to lock her booty and race to this gas station. She wasnât finished there!! In the final scene as soon as she gets to her motherâs house She strips down and takes another shit before getting in the shower . She was feeling nasty after shitting all day!! Three Great clips showing how sometimes shit happens anywhere!!

That's Right BITCH!.. Call your dysfunctional fucking family & tell them that you won't make it to their lame ass Holiday dinner this Year!.. lol.. you need to tell them a Super HOT Goddess named Megan took control of you & that she orders you to jack your cock off so many times - that your too fucking weak to even move!.. he he.. OH & By the time I'm done making you jack it off for me - OVER & OVER AGAIN to my pretty little feet.. you won't even be able to stand up.. much less make it to Xmas Dinner!.. lol...

It's her birthday today and she plans to do something she's never done before. She's not ready to venture into eating her own shit, but she can tolerate her own piss! So he gives her a glass bowl which she can piss on. After unloading a stream of warm urine, she brings the bowl to her lips and sips from it! She takes it a level further and gargles the liquid in her mouth!

I pee in the street and I'm stamping in a puddle of urine. Now I go to the bathroom and I pee in the pose of the doggy with a strong sweat. Now I'm playing with urine in my bathroom. 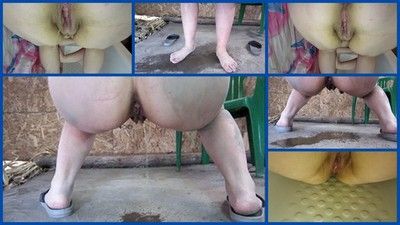 The red haired Nikky spits just for you at the sideboard. Then she starts to play with her spittle. She spits at her hands and brays her spit. Then she separates her hands again. Of course you can see spit threads while doing so! And Nikky can't stop and continues to spit even more! So it's no wonder that she also plays with her shoes and the spit at the ground - again with lot of visible spit threads...!

I come home from gym and I dont know why but i dont feel good, i think Chinese food was not so good. I feel very very gassy, and i feel like i need to far very bad, i turn arund and i start pushin, i still have my leggings on, i tought i will fart but i take a diarrhea in them. mmm my white leggings are full of diarrhea:)) now is ur turn to suck all my dirty farts from my ass and smell them. come on make my asshole clean. i know u like my poo hole, ohhh God so many farts ans so much soft shit all for u my favorite slave, if u suck my farts and my asshole nice and good u will be my slave for ever. Enjoy!

Contessa Calucci brought a new toilet, which was used by us 3 Ladies then.And by Contessa Calucci, me and a domina-girlfriend. She brought the slaves in chains into the slave cellar by pulling him to his tail to present us the slave. First we spat all three, into his mouth. The slave had to lie down under the toilet-chair. On which the Contessa sat and pissed him in his mouth and then she pooped him a mega-shit sausage into his mouth. Then I sat down on the toilet chair and also shit the slave a mega-shit sausage into his mouth,too and on the shit of Contessa. While the slave was eating our shit, I pissed in his stuffed mouth. Our girlfriend and I then pissed into a dog bowl. I then filled our piss in her ass. The piss enema she farted the slave also in his mouth. After I had fed the slave with our shit, there was still a big shit sausage on the ground. At first I wanted to stuff the slave into his mouth, but then we came to the idea of stuffing the big shit sausage, the slave, into his asshole. What I did then. With the shit sausage, which protruded from his asshole, we let the slaves so lie. The slave had determined for several days, no more hunger, with the quantities of our divine shit, which he had to eat as our living toilet, that day! Lol! You can see all this from 3 camera perspectives

Today I fed breakfast to my toilet from my ass. Banana is a sweet prelude to the main dish, a juicy large heap of shit. Portion for a portion of my toilet bowl swallows and thanks. Today he is waiting for a small surprise at the end, but he does not know about it yet ... 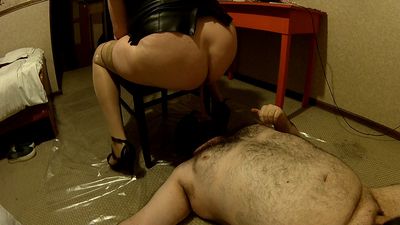 Her generous sugar daddy is begging for it...he wants to have a go at her beautiful ass! Now this bitch knows what he wants but she's not going to give it to him unless he promises to buy that pretty sports car she saw earlier! She teases him by rubbing her hands on her pretty cunt while he watches and drools. She makes him lick the juices off her fingers! Then she bends over and allows him to take the stuffing out her asshole!

88206 - Slave licks the street grime off my boot soles

I'm sitting in the armchair and order the slave to get on the floor in front of me. He has to clean my sexy Buffalo boots with his tongue - while I explain to him where I've been walking with these boots. I've walked through the shopping street and stepped on all the dirt and rubbish - all of the disgusting dirt that's now sticking to the soles of my sexy boots - and all of this dirt the slave's going to lick off and eat! While I lay back and enjoy watching him do his duty I notice my camera girl's boots are quite dirty as well! I ask her to put her boot on the armchair and order the slave to lick her boot as well! Of course the loser doesn't hesitate to follow my command and licks all the dirt off her shoes as well! Obviously this position isn't too comfy for her - so I take her boot off and push it on the slave's nose. He has to smell the stinky inside before he has to finish licking it clean!

A clip from another store I am now bringing to Yezz. TOILET BENCH TWO. The slave spent the entire night, aproximately 6 hours strapped and secured into this bench. Fighting for each breath under my ass as I used his face as my own personal gaming stool. Peeing whenever I needed to and relieving any gas from my gaming munchies and soda. He endured all. Cut down to show only the action during the night. But I felt a little blocked up toward the end.. and there was something more than gas lurking.. what better way to clear myself and humiliate my bitch than an enema?! I fill my ass, and empty it into his mouth before sitting right back on his face and continuing my game. And his mouth was filled.