Yes I allow you to jerk off to my shiny perfect ass in this clip. I know it is your weakness. I know that you will give in to my ass in a second. You need to do anything to worship it. You are just a little pay bitch for my shiny ass.

gorgeous german pro dom comes home after a shopping tour. she is dressed in casual clothings. on her feet are personal high heel black leather boots. she walks to the dog cave and gets out her slave dog out of the box. get on the floor. as you can see i was shopping and now my boots are very dirty. you are going to clean them now. so start licking you pathetic dog. and our doogie slave does?he licks the boots all over with enthusiasm knowing that its a great honour to lick the dirt of the boots of a beautiful goddess like black diamoond is. is it hard to breathe under the mask doggie? yes it is, mistress. i dont care about. i dont want to see your ugly face. so get on licking! and since when a dog can speak? and the doggie does. thats what all slaves are for - just to be boot licking dogs.

we are back in the slave school today with superhot german pro dom black diamoond. on the calkboard is written: heel-worship and caning. the caning was already offered for you in our store here, so today its time for the worship action. three pupils are in class today, one has to stand in the corner, the others are ordered to sit down after the mistress appears. mistress black diamoond explains that the theme of the lesson today is heel worshipping and one of her pupils has to come over to her. then he has to lick her heels. of course from all possible sides and of course every mikromillimeter of them. all dirt has to be cleaned off properly. then the other pupil is also ordered to lick her shoes, the heels, the soles, the side, everything. it seems, that our pupils have understand how things are in this classroom and they did the worship well.

The latin maid is cleaning the house , even against Mr. Pine's will. He is on vacation, but the latin maid turns on the vacuum, and makes noise!He keeps turning the vacuum of the power plug for two reasons, to reduce the noise, and to see the Sexy latin maid Ass! But she caught him! She got MAD! She makes him clean the floor, while she rests on the couch! After cleaning it, she makes him massage her foot and makes up for his behavior! She makes him worship and gag on her feet! She is mad and he suffers a lot of gagging on her foot!

Do you want to suck cock? Oh.. I know what you want and that you love it! You wanna look like me hahaha now do whatever I say or all your friends will know what a whore you are. You look like me, but I'm better than you!

Nothing is hotter than the bratty goddess of your dreams teasing and denying you an orgasm. So sit back, worship my pussy in these hot yoga tights with your wallet all while I take away your jerking rights.Submit andÂ give me all control over your cock and wallet! 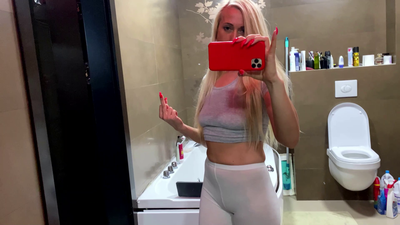 Custom video - "You can't believe I thought I was gonna fuck you. You invited me over you need someone to clean your place, you decided I'm gonna be your sissy maid and I can't refuse because your bbc boyfriend is in the next room and hell come in here and kick my ass if I refuse. You give me panties to put on, tell me I need to clean the most disgusting stuff, the toilet, the litter box . You don't like my attitude and call your man in to beat my ass."

Today, you're gonna lick my ass clean. That's right. It's early morning and I'm still in my PJs. And it's time for your first duty of the day. You're going to get to your knees behind me, put your face between my big, bouncy ass cheeks and clean my ass. I expect you to work hard and be thorough as you taste my ass, for it is indeed a treat for somebody as lowly as you. If you're good and clean me well, I will even allow you to come for my delicious, Superior ass!

Do you want to suck cock? Oh.. I know what you want and that you love it! You wanna look like me hahaha now do whatever I say or all your friends will know what a whore you are. You look like me, but I'm better than you!

Kat preens herself, does her makeup. She wants find a groom, attract with her new image. She posiert, admire herself and she likes her new image, her look. What a dirty slut I am she purrs with pleasure. Takes the shit and starts playing with it, licking and sucking. She can't be without shit anymore, she needs this dirty taste

The boss calls in her employee. In general she is very displeased with his work and plans to fire him. He is told to apologize and kiss her shoes as punishment. Then she orders him to undress, takes the bamboo cane in her hand and canes his ass dozens of times. She makes him take off her shoes and smell her feet. In order to completely humiliate him, she orders him to strip naked. She canes him in the balls several times and kicks him. Then she makes him kiss her shoes, but that is only a break from punishment. The boss sits down on the sofa, pulls him over her lap, and slaps his bare ass. Now, on his knees, he is told to kiss the soles of her shoes, slapping him on the face at the same time. She tells him to lie under the desk, he will now be her footstool. Time: 12.34 min.

The film features three girls (Julia, Marta, and Ewa) and two guys (Don and Wojtek). We edited 20 minutes of material out of three hours of footage. At first the girls, who are wearing winter shoes, are trampling a guy who is chained to the wall. Then they switch to high-heels and doc martens, which leave visible marks on the body. What next? The film includes: three girls on top of one guy, one of the guys picks up the girls with his arms, the girls stepping on his hands with their heels, walking and flamenco dancing on a plank that is placed on top of the guy, stomping on the guy's stomach in the doc martens, as well as standing with the soles of those heavy boots on his head (they were new). The film was shot with a Samsung camera on a DV cassette. Time: 19.40 min. REMASTERED - movie from 2003

And again, a new toilet slave for me. He knows what he has to do, I sat down first with my ass on his face and he had to lick my asshole clean. He was trembling with fear what awaits him. Then I pooped a huge pile of shit in his mouth and on top pissed. He had to swallow everything, then I have his teeth brushed with my shit with a toothbrush. Since some shit still was left, I ordered him to take them and to jerk his cock with it until he splashed.