72315 - Sweet Jamie-Kate and her velvety-soft hands

Jamie-Kate shows you her gentle and velvety-soft hands. She really likes her hands and painted her nails - especially for you. Just look at her - showing you her sexy hands.

Felicia is another girl who needs a lot of attention and especially after eleven hours with her shoes on! She needs to relax and watch TV so she makes this loser lay down on the floor to serve as a footstool with his face! She makes him take her shoes off then completely cover his face with her sweaty white socks! They were extra smelly so that's why she's laughing at his face! She noticed some dirt marks from the leather of her shoes so she makes him lick the bottom! Felicia also makes him take her socks off to rest her smelly bare feet in his face! She makes him take some deep breaths in her feet just to give some fresh air! She also wants him to stick tongue out to refresh the bottom of her soles!

Shrunken man Brandon's rebellious attitude has finally pushed Giantess Katelyn so beyond her limits that she tells him his life is as good as GONE. His last act of rebellion involved sneaking into her keyboard while she was having a relaxing 4 hour video gaming session. He drew graffiti all over her fingers with a shrunken sharpie and it took her two hours to wash it off this morning. He has also been causing a headache of trouble with Katelyn's other shrunken pets and slaves.So, since previous methods of discipline proved not to work, she tells him she's decided his fate will end between her lips, down her throat, or between her teeth. She tells him she's going to miss him, though. His rebellious personality once brought fun and excitement to Katelyn's home but now it has just gotten too out of hand. She tells him first she's going to french kiss him so hard that he'll be lucky to survive the pressure and the saliva. If he gets lucky and lives through it then next he'll be shoved deep into the center of her double dipped chocolate covered strawberry and carelessly -quickly- chewed up to bits and eaten alive.Katelyn then brutally and sloppily french kisses him for minutes on end... but he survives it! He must think he's real strong surviving such an experience with her mouth, but he surely won't survive what's to come next! Giantess Katelyn then pushes little tiny Brandon deep into the very center of her chocolate dipped strawberry and pops the entire thing in her mouth and eats it all in less than a minute. Goodbye, Brandon! Katelyn wipes her mouth with a tissue and happily announces that putting up with Brandon's attitude is no longer a concern or hers, or a concern of her other pets and slaves either!

Two giggly girls, Mina and her friend Colette, walking, trampling, and jumping all over me outside at the park! I just finished eating breakfast and I swear they were trying to make me puke as they jumped up and down on my stomach! Another thing that hurt like hell was when Mina walked across my skinny legs! It was very windy out so the girls do some wind surfing too! 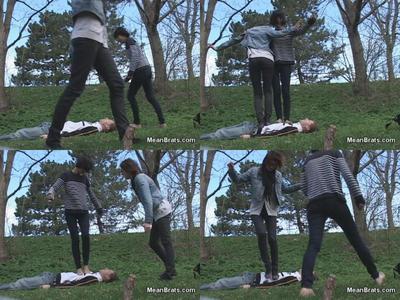 Stella is going to hit the dance floor. She is already wearing her sexy dress and high heels while doing her final make up. You shall see how she gets ready her make up.

Golden Autumn -Time for beautiful boots!Accompany me to a walk through the park and adore your mistress.Have fun watching!

After learning the ropes, one of the first things Savannah wanted to try was a lengthy board sit. She sat on Matt's torso facing sideways, rearward, and forward. She even did some throat sitting at the end. Anytime a 500+ lb woman is squashing on the board, you better believe there's going to be a struggling seat!

The girls know you are watching! So Candy asks Clarissa to show you her foot worship skills! She removes the pink sneakers to reveal the Goddess' sweaty soles which are fully visible throughout the whole clip! A few sniffs from the piercing strong stink and there she goes on licking the tasty sweat off. Her eyes tell you she knows how lucky she is being in between Candy's feet, feeling their warmth on her face and being able to smell and taste their juicy sweat!

Taped session of Miss Poison Ivy laughing after humiliating Her slave. She picks boogers and wipes them on his lips, spits in his mouth repeatedly & makes him lick Her sweaty feet after She wore heels in 85-degree weather.

Christin plays with a inflatable mattress. She is wearing her old Mules and walk over the mattress and destroy it under her Heels.

Christin crushes a working TV with her old worn Pumps. She standing on it, walk over it , and stomp it with hard steps in pieces.

Stella is sitting on her porch and smokes. She shows you her sexy ankle boots and her sexy leather pants. She smokes two cigarettes for you. She smokes at you, she spits in your mouth repeatedly and she tap the ash off in your mouth. Also she is showing you her boot high heels and her worn soles. When Stella is ready to smoke, she is flicking away the cigarette individually to you with her thumb and middle finger. Great pov scenes, fantastic close ups, too.

Your orgasm belongs to me and me alone - completely. I will control it. You will suffer for me and you will cry out in lust. Or in pain. Just fetch your lubricant, will you? You will need it today. I will show you what you are to do and you will do it exactly as I tell you to. Exactly, you hear me? NO DEVIATION!!!

Lady B destroy her ugly high heel Pumps. They are brand new, but her husband painted one of her heels green. She hate it.She destroy now the heels. She scratch the heels on a metal grid and after she drive over it, several times with her heavy BMW .

You at you...right on time. I knew you would be. You can't resist me and do what I say, when I say it. What? There's nothing wrong with my teeth...or my eyes Mmmmm...I'm hungry. Oh, you didn't think you were going to come over here and have sex with me? HAHAHAHA! That's hilarious! I have no use for fucking a pathetic human like you. You are just food. Food for vampires...

Please reenact my first bi fantasy. It started with a wrestling match between me and a friend.He was the younger smaller "pretty boy". To my surprise he was able to easily pin me down. His girlfriend walked in as he had me pinned. I always had a lust for her and was embarrassed that he was completely humiliating me in front of her. When she saw us she actually thought he was fucking me. She never stopped teasing me about how her man was able to dominate me. I would like you to play the girlfriend and add some new sexual elements. You tell me I should admit your boyfriend is more of a man then me. You put on a strapon and make me suck it while he spanks me until I cry. You fuck me up the ass while I kiss his sexy hard butt. You then make me kiss and suck his sexy dick. During the video you act turned on by his tight, young, hard, sexy body. You could show your whole body as you stand above me in a dominate position saying even you you could beat me. Nothing gross,smelly, or hairy.

Olesya's wearing her jeans leggings today. She notices you watching her pretty quickly and then gets into the bath tub! This redhead isn't going slow - she immediately turns on the water and soaks her jeans. Watch as her jeans gets darker under the stream and watch even more closely as she wets her sexy jeans ass! She smiles at you the whole time - as she knows exactly how much her wet jeans turns you on. Come a little close, you're getting first row seats here!

You are fascinated bye womens booties. You love them in tight or shiny clothes and get arroused even at this adorable sight? Good! Today is your lucky day loser, you are allowed to adore my hot ass in this incredible leather jeans. I love to sit on your face and humiliate you. Do you feel the pull.. the desire to stare and let everything else melt away as you stare and stroke? 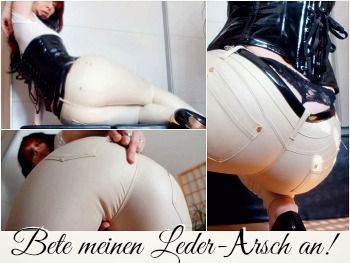