This clip shows my little slave slut kneeling in front of me and because he has been a good footstool, he is allowed to lick my dirty boots clean. Normally my dirty slave can barely manage to get enough to eat and so he is very happy to eat the dirt of my holy soles. You can see his black and dirty tongue because my boots are really dirty and you can even see him blowing my heel pretending it would be a dick. He feels like a real slut and it must be very humiliating for him. While I am relaxing on the couch, he is giving his best to please me and to clean my boots because I don`t want to see him for the next few weeks. Imagine this: he is so close to my devine feet but he will never ever be allowed to even touch them. A lot of dirt has fallen down on the floor and my stupid slave has to be my vacuum cleaner and my cleaning mop. He is too gready and so his tongue starts bleeding but I don`t care. After I have removed the boots from my divine feet, I let him alone with my divine boots, because and he has to finish his work.

Pink Emu Punk Girl Lolli tramples him in Chucks ...squishes his face in socks and kicks his head wit her pink bare feet.


This is another very hard clip in which my dirty slave has to endure 500 hard faceslaps just for my fun. I am wearing some beautiful black gloves so that I don't have to touch his dirty and ugly face an in addition a beautiful and breathtaking leather outfit. See how my slaveÂ´s head gets pushed left and right because my slaps are really hard. After a while I even start to box his ugly face with my fists and he looks so stupid while taking every hit and slap. After 250 slaps I take a break and my slave has to lay down in front of me while he gets tortured with the heel of my beautiful black boots. Then the cruel punishment continues and I start to hit his face again very hard so that he even starts bleeding. But that's not a reason for me to stop and so I continue to hit him. He starts making mistakes counting every stroke and somehow he always counts less than he actually got, thatÂ´s so much fun for me! After he has received the last and 500th hit you can see how helpless he is and I am fed up hitting his ugly face. At the end he remains kneeling while I am going to fresh me up.

Mature Mistress Nikki welcomes her new young slave. She tells him to kiss her feet but he hesitates. She punishes him by giving him face slaps over and over until he kisses them right!

Part two you get to lick the bowl but not before Goddess GG adds some of her spit to the mix. Eat up. Then when it is all done cooking she makes a special piece just for you losers to bid on and buy. As she licks your piece and then steps all over it with her dirty little feet. Video Size 320 x 240

ItÂ´s very cold outside and you can see my stupid slave kneeling in front of me. I am wearing my beautiful warm fur while my slave has to crawl out on my balcony only wearing some stockings and underpants. I donÂ´t like the snow and so I order him to lick it from the ground. Then I order him to build the one things out of snow he will never have in his ridiculous slave life. He thinks I mean the one thing he will never have is "sex" and so I am laughing at him while he is trying to build "sex" out of the snow. His body is shaking because itÂ´s really cold outside but I donÂ´t care about it. After that I order him to build a huge cock out of snow which was the thing I meant he will never have, because his dick is really tiny. After that he has to blow the cock like the slut he is. And because I am a caring mistress I allow him to boost his body's defences by rubbing the snow cock all over his body. He gets really wet and after he has to put the rest of the cock in his underpants itÂ´s gettin too cold for me and so I go back inside while he has to stay outside for my amusement.

Our shoes are dirty! Time to call for our slave who has to lick them until they're shiny again! But he's too stupid to lick them REALLY clean - so we faceslap him and in the end he's only a footstool!

Sexy katja, dressed like a rider, is dominating her slave in the bathroom. First she punishes him with her swip, then she ties and gags him. Of course, thatÂ´s not enough for her, so she decides to stand on her new pony and strangulate it with her boots. Find out what sheÂ´s also doing with her victim!

In this clip you see our Turkish goddess Ceylan punishing this guy for his unfaithfulness. Ceylan starts trampling, kicking, beating and spanking him without hesitation. Jumping on his chest could be a funny thing (well... at least for her) she thought and has some more trampling and jumping fun. At the end he says sorry to his wife into the camera... well .. to be honest .. he had no other chance ;-))

4 days in and you are finally realizing just how hard this is going to be. I wont make this easy for you at all! I am going to tease you till you squirm hahaha I control everything now! Denying you makes you do the craziest things. 26 days left to go and already I am making you crazy! Stare at my gorgeous ass as I force you to jerk with no promise of a release hahaha We are going to do things my way! I am wearing sexy new victoria secret lingerie from mikey :)

You want to look at my tight blue jeans? How she fits tight around my ass and my legs and feeling so good? Then download this Clip - NOW!

ALINA as a model posing , Steve is supposed filming for her but after the shoot he find out that there is no tape ... in the camera ! See our amazon Alina so upset humiliating and dominating the distracted cameraman . Humiliation - Faceslapping - Forced muscle kissing - Breathtaking Head-Scissors Sleeper-Holds and more ... 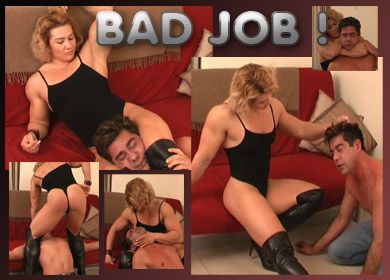 Sandra B forces to smell her whole sweaty body. Stinky Armpits and Boots... her smell socks and her ass.... cool foot dominance and facesitting action

After outing my slave that he's lazy, he has to ly on the hard, cold bottom to serve as my facesitting victim! Usually he deserves something much worse but I think squeezing his face with my sexy jeans ass and taking his breath should be enough! What a fun! (Great POV!!!)

Mistress Sina facesits her victim! She wears a sexy, tight jeans! Her slave should be glad that the sits on his face with her jeans!

Two girls knock out their slave! They take photos while posing on him! Very funny and great clip with 2 damn sexy girls! Just say: GIRL POWER! Frazzles him out! They really laughes at him! LOSER!

Sexy gothic mistress Svetlana poses for you on her couch! Her jeansass is really cute! DonÂ´t miss that clip!