Lady Xifeng dehumanizes her white slave by forcing him to sniff her ass and sit on his head. This is how she breaks in her slaves before toilet training. Once she puts him through all the stages he will become her official 'TP' (human toilet paper!) Face! (Clip Language: Mandarin/Chinese) We're on a first date and it's gone very well so far, so I invited you back to my place so we could hang out a bit more - we're having fun and there's great chemistry! While chatting on my couch, you notice my crack a small fart - you weren't sure at first but the powerful smell a second later confirmed it and so did my embarrassed reaction! I get flustered and ask you to leave, you say it's fine but obediently get up to leave, which is when I notice your bulge! Trusting my hunch, I lift up my skirt and ass and fart loudly. Your bulge grows and I call you out - you're turned on by my farting! I get excited and admit it's always been my fantasy and we decide to take the date up a notch. I teasingly lead you to the bathroom and strip sensually while encouraging you to do the same. Then we sit down on the tiles across from each other. I make you watch and instruct you to stroke your cock as I rub my clit and push out a big, hard, perfect log. As I finish shitting, I pick up a big piece and count you down to cum all over it and my dirty asshole and pussy! Cum while you smell my shit!

First one of the girls explains the rules of trampling to the rest. Nine girls have to stand on a man lying on the ground for 8 minutes and none of them can touch the floor. During the first try, the girls climb on me in high-heels, but their heels dig into my legs so hard that I can't take it and so they quickly get off. Then we try again, but without shoes and its a lot better this time around, although the girls don't move that much; they just stand on my stomach and chest making it impossible for me to breathe. A few of them stood on their toes which caused additional pressure. Time: 13.50 min.

Ebony Mistress Miss Yolanta chokes her slave with a belt and lites a cigarette. She loves to sit on her slave like on the throne and tease him under her. With her jeans hot pan she places her ass on his worthless face. The ebony goddess sits hon his face and ignores him and she uses the Balt ass leash. The slave nows his place. He is just a human seat for mistress Yolanta ..

This slave is already pretty bruised up from the previous whipping - but I'm going to add a lot more bruises now! I've put on my sexy high heels and trample him brutally. The thin heels go deep into his stomach and leave behind painful marks with every step, but since he doesn't want to disappoint me, he tries his best to endure the torment. I even bounce a little on his skinny body, before I take off the heels and continue to trample him under my bare feet. But it's not really getting easier for him - since I can jump all over his bruised-up body now!

Sophia sits on her kitchen table wearing a tight, red knit dress and silky smooth, cranberry tights. As she describes her tights she lets you see her feet up close as well as her long, sexy legs, crotch and ass. She knows you're staring at her as she poses and suggests you show your appreciation. She's a sexy girl, isn't she, and you would do anything for her, wouldn't you?

YOU are my ass-worshipper. Yes, YOU! You can't take your eyes from my ass. Look at it and admire it. Just the thought of my perfect ass gets your horny and now you can see it in all its glory. it looks awesome from every angle and I will use that against you. I have you in my hands because of your addiction to my ass. You just can't stop looking at my ass and you don't want to! So I have a little surprise for you. Here's what you must do: Never stop worshiping my hot and absolutely perfect ass, because it is the hottest thing you have ever seen!

Queen Hanna and Mistress Jane have an extra delicious meal for you today. Cornflakes! Of course you get them served the way you deserve it - in the dog's bowl and crushed under their high heels piece by piece. The crunchy flakes crack below the mistresses high heels, getting processed to powder. Of course the mistresses are generous and won't give you just dry flakes! To make the whole meal even more delicious, they take turns to spit in the crush cereal and create a lovely mud which you're going to lick from the bottom of their high heels. So, is your mouth watering already?

ItÂs these ladies first time to meet their new stepfather and they immediately do not like him upon seeing! He is bossy and acts dominant, so they decide to put him in his place! Without warning, they grab and strip him of his clothes! As soon as he is left with only his underwear, they lay him down on the floor and then one of the sweethearts pisses directly into his mouth, leaving him swallowing mouthfuls of piss! It doesnÂt end there, since the torment has resulted into a huge mess, the victimÂs face has to lick the floor clean! When that is finally finished, the other dominatrix gets her turn to urinate into the mouth of the slave, resulting to a second round of piss drinking! Though, this oneÂs much worse! With the lady having her pussy so close to his face, every drop of urine gets inside his mouth and down his throat without waste! When she is finished, she makes him lick and eat her dirty vagina clean!

Mistress Lilly just recording more shitty movies ! She love to make home movies while she shitting or pissing and she love to share her passion with you ! The silicone lady adore to shit and piss EVERYWHERE and she is a true Scat Goddess ! For this movie today she recorded 3-4 scenes where she shitting in her panties, her pantyhose and she show you how dirty is her asshole ! She hope you become more addicted by her shits !! 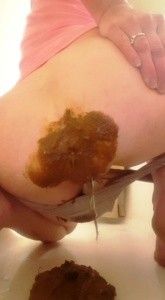 Ebony Mistress Yolanda wants her footfetish pet now to worship her bare feet. She wants him to lick her sweaty bare soles ( shoe size 42 eu) and to suck the sweat from her long toes. She loves to tease her leashed slave and see that he adores her. He is on his fours and has his worthless face to her goddess like feet....

Oh my god- I am invited to a job interview at a balloon shop! Gonna give my very best to get that job...but of course I will have to tell some white lies to get me there ;)

My poor sad little cuckie husband. Always so upset when I fuck other men. So tonight I'm going to let him jerk off-while playing with my feet-and listening to me tell him about fucking another man

Dita is working in a pharmacy shop and she's the last one there. It's almost time to close the shop, no one will come anyway this late in the evening. Dita is finishing her work facing away from the main entrance while a guy in a mask surprises her from behind and he wants to rob the shop.Dita is surprised, helpless and this guy is very aggressive and he's threatening her. She doesn't know what to do but she anyway can't open the vault with money right away since it needs a passcode which is stored in the company computer. The robber doesn't want to hurt her so he starts to torture her in a way - he starts to tickle her feet until she will reveal necessary information.She don't want to submit so it's time to be more aggressive. The robber ties her legs and tickles her not only with her hands but also using several tools at his disposal. Dita is laughing but in reality she's in an anxiety because she is so much ticklish. She's almost ready to give him what he wants now...

Tiffany is not a nice person, she's an even worse giant. Having found one of those annoying borrower people she has kept him in a jar so she could torment him as nothing more than a tiny plaything for her cruel amusement.She spits into his jar so he can shovel her sweet spit into his hungry mouth and puts the lid back on until she's ready to play with him later.After she leaves, the tiny borrower manages to tip the jar over and make good his escape. Sadly for him, upon her return it doesn't take Tiffany long to track him down and corner him as she grabs him up in her huge hand.She takes him into her bedroom to take him a lesson. Initially content to suffocate him under her panties, but decides that digesting alive in her stomach is a much more fitting punishment.