Spitting Humiliation | by Mistress BehNew idea of the girls, make their slaves human sink, the mouth of the slave is a drain, that loser slave, submit to just to serve me1 - Spit on every face of the slave, he was full of saliva, was many spits2 - Brushing my teeth, I brushed my teeth and spat everything in my human sink.3 - Mouthwash (Toilet Slave) To rinse I filled a glass with water from the toilet, and poured it all into the human sinkDid you like the video? order a personalized video of "Human sink (funnel)" contact usWe make your cruder and humiliating ideas come true, the Queens love to make the slaves suffer (Real Videos of cruel humiliation) 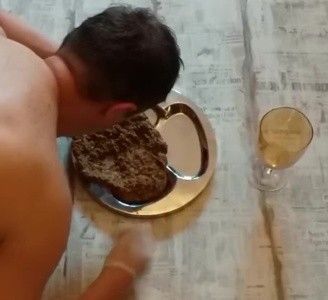 I have taken the whole day off to fully indulge in my mohair addiction.The soft material clings to my skin and I feel like in heaven.My whole body tingles when the fabric touches my skin and I can barely canhold back and must touch me all the time to get that feeling under control.But even more it excites my desire to know that you are watching me and yourhorniness is hardly under control. The thought that you would like to be here too, but you cannot, makes me smirk.

Lea sits on the couch and waits for her friend; She looks at her feet, in the brown stockings and her black High Heels.Wie she loves her feet and shoes very much anyway; Out of boredom her about beaten leg starts with itself to play with her shoe. The shoe also spare of the foot and you fell there; It then just simply is putting its feet on the table and goes on it there.

You will have a hard time resisting me. My ass will make you addicted and attract you with its spell! You will never get away from me again because you are so addicted to me and my ass.

You think this clip is expensive? You little paypig, this is just the beginning. I will turn you into my human ATM! Step by step you will pay any amount I order you to. You will become absolutely addicted to me. My tits and my sexy ass will fuck first your brain and then your bank account. We will slowly increase the pressure. First I take what you already have in your bank account, then we will go into your savings accounts! Do you have property or expensive items? We will also change that and you will be thankful to work only for me and to lay your hard earned money at my feet! Maybe your head will say it's too much but your cock will get you back on track! It is your destiny to be my paypig and now I will fuck your mind to the extreme!

Here I am together with my girlfriend, a slave who was lie on the floor, one after another, shitting extremely in the mouth. But before we filled the slave with our big shit sausages, we make him lick our feet and smell our butts! Of course, he had to lick our asses as well. See how BBW girl pooping the slave a mega shit sausage in his mouth. And after that, on her shit, I shit on it. The slave had to eat our shit afterwards, while he came to his limits! But we knew no mercy and have fed the slave with our shit.

You may worship my sexy ass again. It will make you go crazy! YouÂre addicted to my ass and you would do anything for it. No matter what I demand you will give it to me!

I absolutely love my blue latex boots. Imagine being stepped on and/or your balls pierced by my spiked heels. I enjoy hearing your manly-moans by the power of my thigh-high boots

This video was made when I was walking in the wood. Too far from home so I decided to give back to mother nature her delicious delights. You can see my tasty booty, the yummy lava and my anus wipe. Enjoy nature.

Feel yourself becoming more addicted, more drawn in to my ebony power and presence. The Goddess gives you such joy to bask in my black radiance.

My feet in pantyhose is so perfect and sweaty after long day walking in boots!I know you was waiting for it!My sweaty and smelly feet make you weak and horny!All teasing with my smelly feet and seductively talk to you make you want to worship my sweaty feet and to jerk! Enjoy and happy jerking!

Initially, Alexandra's feet were sweaty after her ballet shoes, but this is not a problem for her because I easily fixed this problem. Do you want to see how I did it?

You like my sexy tits, don't you? How hot would it be if your penis could touch my breasts or I push your cock between my tits?! That would be awesome, I know! Do you think I would let you? I allow only alpha men near my sexy tits and I do not believe you are an alpha man! You are a loser and you will only jerk off if I allow you to!

I'll let the slave loosen my boots. In there hides a personal gift from me - only for him! My feet are wrapped with a foil and have not lost a drop of sweat to the outside. I've been in them all day. They are wet, sweaty in their nylon tights and a lovely wet nylon foot smell will rise in his nose as soon as I unwrap the foil from my nylon feet. To keep his senses focused on the smell, I them in his mouth. From now on breathing only works in combination with smelling my stinky and wet nylon feet! That's a great gift! Or maybe not?!...

Letta stands and looks down at me as I lie at her feet on my belly and lick her toes and her feet. Then she turns around and I started to lick her sole very thoroughly, as it need. You can see it and see for yourself.