What is Mistress Anfisa doing? She invites her slave to smoke a cigarette together with her... on eye level?! The slave seems slightly confused but happy about his Mistress' generous offer. She gives him a light and even shares a cigarette with him... but then the atmosphere changes! This idiot has actually forgotten the ashtray! Therefore he must hold out his hand for the ashes. Mistress Anfisa humiliates him for his incompetence and spits in his face several times!

Another really gorgeous newbie called Cheyenne joins our pay per view area. In her very first clip, she tramples Cucciolo under her sneakers and socks, as she walks on his stomach, she uses him as her human step, she jumps on his chest and she steps with her full bodyweight on his face, leaving the marks of her soles on his visage. For the sneakers and socks fans, a refreshing trample clip with a superb girl ! 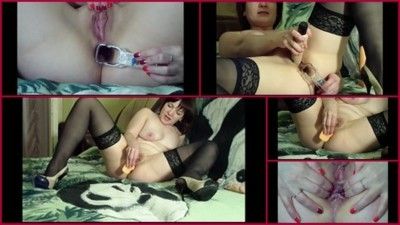 I wanted fuck and fisting slave husband. I was already getting ready, I put cork in his ass and then bell rang. Master repairman called, I called him look at stove, and we agreed that he would come only tomorrow, but he came today. To be honest, I didn't even doubt whether let him in or not. I put slave on his knees in the corner and went open the door. Upon entering, the guy saw a man standing dressed in woman dress and immediately became interested. Dialogue did not last long, he immediately agreed give slave in his mouth and have fun. Husband-slave diligently sucked penis of an unfamiliar guy, smacked his lips, took it deep down his throat. Of course, I was excited by such spectacle and decided add peppercorn to the process - to shit in mouth of slave. The cock became even better entering the slave's throat, pushing and ****** him eat and swallow shit. It was the sexiest sight I could not resist and stand right over my husband. Dirty excited cock entered my ass. Slave husband watched as another man fucked me so close in front of him, it was amazing. The climax was the ending in his mouth. Cum abundantly watered his toilet mouth, his tongue. I was thrilled

ITALIAN LANGUAGEToday I am in the company of six of my beautiful Mistress friends and three slaves.Our hands will be the protagonists of this video because we have decided to punish our slaves with an intense face slapping.Who knows, maybe by slapping their useless faces some neurons could finally wake up ... ahahahahahah ... unfortunately it's just a false hope, at the end of the video they show no signs of improvement, they stay there with their happy faces ... happy to have been devastated by our beautiful hands

Are you ready to pray? Because it's time to worship ur biggest addiction - my smelly ugs,worn socks and worn slippers gives you no other option but get on ur fours and make ur mouth,nose and hands busy! Your mind are mine so easy!

Like the slave, you are addicted to my thick well shaped legs and feet. I order you in silence to jerk off at my gorgeous veiny feet while playing whit my shoes moving my feet in all directions and dangling my red heels!!

My legs in sexy pantyhose without panties and denim skirt are going to make yuor cock rock hard,oh I know ur weakness,my denim addicted stroker! You gonna stroke ur cock for my sexy legs,feet and ass non stop until you explode all over my denim ass!

I know how excited you get every time you see my amazing feet,especially around your cock, when my toenails are scratching it, so seducingÂ  and cock so throbbing.... - just the dream comes true for you My foot slave!

Better not to have to deal with 3 MistressesÂ We have immobilized this pig in a particular position: legs tied up and hands locked under our soles. Cleo Domina, Gea Domina and Me take turns stepping on his balls and cock, tormenting those miserable genitals, keeping him anchored to the floor by squeezing his hands so that he can't protect himself and pulling him by the leash looking at him from top to bottom. Who knows if he will still be able to make his system after such a treatment...

Natasha places a rope around the slaves neck and pulls very tight, just look at his face and see how red he goes. She then slaps his cock very hard before going back to pull on the rope hard again around hit throat. Have you had enough she asks but he cannot answer because she is pulling the rope so tight. Then its more hands around his throat to teach him a lesson. She also whips his cock with the rope before using the rope to bind his cock making him beg out for mercy but this just makes her spit on his cock showing him no respect at all.

animal - come here - this is how this new clip with mistress akella starts. dressed in an expensive designer rubber waredrobe with special spiked heels she orders her slave to crawl over to her. where have you been? i have been calling for you for some times?you know your work? she taps with the end of her riding crop to her shoe..and the slave knows what to do: worship the goddess and lick those heels clean. and he has to lick them all over. mistress akella gets really cruel when she orders him to lick fast on the spikes - for sure this is pretty painful...

SILENT/NO TALKING Clip. Just showing off all my Toerings and my dark green toenails while wiggling them for you!Clip is 3 mins and 20 seconds long.Im wearing three toerings on each foot!

Empress Victoria time for torture today! we have here adorable goddess empress victoria sitting on a throne. the masked slave is ordered to take off his shirt and come closer to the goddess, where she starts to torture his nipples by some harsh pulling. but this is just the beginning? she also presses his encolared prick tight with her special heels?and wowowow?what cool heels are these? high heel pumps with shiny spikes at the top, so these ones are the ideal heels for torturing? next the slave has to lie down flat on the ground, while his goddess continue to stomp on his pathetic cock. she goes on further by scratching the cock with the spikes of her heels?as we talk about heels?good idea to perform some more nipple torture - this time with her heels. still not through with the torture she takes out some nipple clamps. well our slave really has to suffer today for his mistress!

The slave must spoil Mistress Anfisa's high heels. He must kiss and lick them. In the process he has to take the heel deep into his mouth as well. At the same time he smells the wonderfully fragrant feet of his mistress. Mistress Anfisa takes off her high heels after the slave has been attended to them long enough and presses her stinky toes directly under his nose. A cloud of fragrance like in heaven!

today we have another phantastic classic female domination clip starring domina liza from the uk. she wears a wonderful vintage outfit with real nylons and ankle boots. even to watch a mistress in this outfit is a real privilege for any man! her slave is kneeling awaiting the commands of his mistress and they follow soon: he is ordered wo worship her, starting at the bottom of her shoe. he has to lick it all over but he is really a very lucky slave today, cuz domina liza also allows him to worship her nylon covered long legs! also he is ordered to kiss her leather gloves before he has to kiss her shoes again.