Giantess Katelyn, the Vampire, has a huge secret crush on a nail salon owner and just couldn't resist shrinking him down and bringing him home after he pointed out her very sharp teeth to the whole salon! Of course the salon thought nothing of it. A girl with sharp teeth isn't all too rare so no worries right? Well, it embarrassed Katelyn and gave her the perfect reason to both seek her revenge on him and fulfill her sexual desires with him.In order to get him home with her she simply took him in the back for a wax and transformed him to doll size to sneak him out. Now, she's home with him and as a starving vampire who has not eaten for days she's more than ready to have her fun with him!She then explains the situation to him in full. No one knows she's a vampire. Anyone who ever found out hasn't lived past it and she intends to keep it that way. Yes, he was really probably just joking around about her teeth but it turns out his little assumptions were right and now his life is in grave danger!She then goes at him. His clothes get ripped off by Katelyn's massive hands and she begins licking and biting him while complimenting how tasty and attractive his body is. It's exactly as she had imagined. So, she doesn't want to eat him all up just yet... she wants to enjoy tasting the sweat of her delicious living meal. Katelyn's toughness spell keeps her from going too far with him just yet. The toughness spell keeps his skin from breaking and is pure sexual torture for Kate. However, even though her spell keeps his skin from breaking... it does not lessen the pain he experiences from her bites.After a few minutes of viciously biting, tasting, and enjoying his body Katelyn gets pissed. She's hungry and turned on but doesn't want all of the fun to be over just yet. The eating part can go really fast and she might even want to make him grow a bit so no will go to waste. However, she's so starving that it's tempting just to shrink him even smaller and swallow him whole. Her moans and actions intensely display her wicked emotions as she pushes her indulgence back further and further. Not wanting to make any rash decisions she gets up and tosses him on the bed. She needs to go cool down for a bit before she continues... woah!!!

Mistress Eve Extreme Hard Trample. Mistress used her heavy winter boots and extremely sexy High Heels with metal tips. She jumped and bounced all over her slave. She digs her heels deep in to the stomach and chest. She dances all over her slave. Mistress Eve likes to trample her slaves balls and groin digging her metal heel tips deep in to her slaves jewels !!! She stomps her heal without any care of what is under her boots. Pain is extreme and the slave is suffering thru all the intense trample session!!!!

It is always nice to see that I can take whatever I want from my slave piggies... This slave gave me lot of cash - He gave me 1.200 ? - HIS birthday present :-D But besides the cash he also gave me some new Gucci boots! This was very nice - so I humiliated him in a very special way... *g*

i can dislikes, when a slave not to obey me.My heel to drill in the slave hand.that is my to denote( to mark)!!!

This guy found himself coughing up his own nuts by the time We were done! lol.. He emailed Me for almost a year bragging about how he could take 10 kicks from Me in a Row "wearing any type of footwear" & that I could kick him as hard as I wanted & offered to sign his balls over to Me. So My g/f Paige & I BOTH kick him in the balls Really HARD with our pointy toe stiletto boots & he soon realizes that we are incredibly powerful. We laugh our asses off after realizing he's Married & that his Wife has NO idea he's even here today. But She'll find out After We RUPTURE him! LOL

Slave training by Lady Sophia Black is a bitter sweet experience. She's tuff and demanding with her boys, physically and emotionally. Lady Sophia has that way of crushing her victims with words or blows, usually she likes to do both. Yet who wouldn't want to be at the feet of this enthralling Goddess, who wouldn't want to crawl and grovel to her, worship at her feet? The more she hammers down on them, the more eager they become! Lots of verbal and physical abuse in this series, as her slaps and stomps her lucky slave into shape, then sits back to enjoy his desperate adoration at her feet.

Julie has one thing that make us crazy. Her crotch. Everyone want to be between her thighs, squeezed by her ass, in hot and wet oasis. Small Mariah is one of them. Julie sits on her belly full weight and enjoys. She bounces on her and makes hard pressure on small belly.

Special Viewer Request: Hidden-camera style clip where Miss Tiffany doesn't know her feet tickling session is being taped, as we remove her boots to tickle her feet through her socks while she giggles....then she suggests we remove her socks for better results and w!

See me walking and relaxing in the garden in my pink Flip Flops! I show you nice posings and leg crossing, dangling and close ups from my nice feet and shoes. 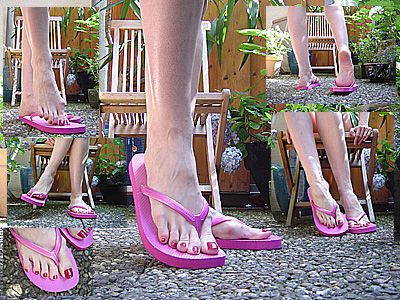 A typical submissive male has a passionate desire to be a slave. Unfortunately, its usually overridden by his demanding addiction. Sure, I could waste a lot of time "training" fools like this, but I shouldn't have to work for obedience. Instead, I turn their weaknesses against them and maximize my profits, always leaving them hungry and constantly coming back for more. Who needs a slave?

Blackmail.... what a word! This word excites you. I know you want to try it. The idea of being blackmailed turns you on. You want to have this little secret. Secret only between you and me. You have never done it but want to try it so badly. I know you do. Because you are still reading:) And who is better blackmail mistress than me? You should do it with the best. I know you are a beginner and I want to go easy on you first. But still I need something from you. You will find out what it is in this clip. You will have one week to send me what I want and in a week I will release another clip with more instructions. I hope you are ready to have some fun! I sure am;)

Lets have a cigarette together. I look really hot and sexy in this clip, especially when I put the slim cigarette between my red lips and inhale.... what a turn on. Enjoy:)

Goddess Eerica has a soft spot for her old summer shoes. They're dirty and her feet get very sweaty and dirty when she wears them. Every time she can, she uses her feet slave to clean the soles and lick off the dirt and sweat from her feet. Proper maintainance will keep those shoes in a good shape for a long time, but only if it's done properly and with a tongue.

Hello my little paypig, do you love watching me in my tight latex catsuit? Yes, of course! You are drooling and the saliva starts running down your chin when you watch me :-D You want to touch my ass when I start to sit down on your face! I know it! But what do you think of me...!? *laughing* Your only purpose is to finance my life! And of course - my sexy and expensive latex outfits! So - jab jab - don't waste any more time, pay piggy! Buy me some new latex outfits... and of course - this clip!!!

Miss Julez brings Her BFF Miss Ava who's a snobby Latina. They make sure this loser-slave is gonna pay to worship every part of Miss Ava, from Her sneakers to Her stinky worn socks to sucking Her toes...Then They make out & talk sh*t to the audience, saying we will never get to make out w/hot Girls like Them & that if you're watching this video you're a loser who can't get a real Girl, that's why you're watching Them make out.

An instructionnal video in which Kristiana demonstrates some of her holds, explaining to the camera how to apply them effectively to make her opponent submit ! Each hold is 3 mns long, Kristiana details each hold, step by step and how to make them inescapable and deadly !! Dummy Steve can barely handle it and quickly turns all shades of purple under the pressure of her legs, arms and ankles !! 7 holds include : Combo armbar/ ankle choke, sleeperhold, front head-scissor, reverse head-scissor, head-lock, head-figure 4 and facesitting ! 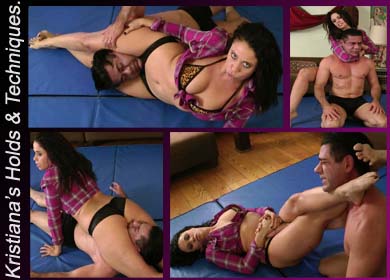 Worship my pretty toes and sexy feet, my footboy. Get on your knees and suck my toes, lick the soles of my feet and maybe I will even allow you to stroke your dick because I know how much my feet turn you on. They drive you crazy, dont they? Hahaha, yes, you really are my footbitch! ...... foot worship, lots of pointed toes scenes, red nail polish and more

This girl works in a pub around my neighborhood and I would say she is one of my secret fantasy since 2011! She looks so fuckin' hot and always wearing nice shoes! I see her every morning and at night since she is working about twelve hours a day! I went for a drink that night and I offer if she wants to come at my home for a drink after her shift? Her answer was like: I don't know, I'm here till 8h am this morning, my feet are killing me! So I changed my offer and told her I could give her the best foot massage of her life? She said she doesn't really care about the drink but she would ki!! right now for a foot massage! Here we go! Anastasia makes me lay down on the floor then takes her shoes off to completely cover my face with her sweaty bare feet! They were so fuckin' smelly but that was the deal! I was in heaven! She rubs them all over my face with her innocent smile and she seems to love it! Anastasia also makes me lick the dirty bottom of her soles and suck on her toes one by one just to make sure I respect my offer! Hot Stuff!