Restrained woman is under the mercy of her captors! She is completely restrained with rope and is unable to move a single muscle! With her helpless state, the culprits no longer waste any more time and begin with their intention! They direct their attention on the womanÂs asshole and take turns finger fucking it to get as much feces as they can out of her rectum! They would then use all of it to spread all over the ladyÂs body to create a huge mess! However, that isnÂt enough to completely content their filthy desires, so they later give her tight asshole an enema, ****** her to release a huge stream of wet feces which the men are fast to catch with their hands and drench the womanÂs body with! It doesnÂt just happen once, instead it is done the second time around, further worsening the already massive mess all over the womanÂs body! By the time they are completely contented with the filthy fun, they proceed to take turns serving their dicks inside her mouth and down her throat, only stopping after they cum and drench her with their load, introducing her to an all new type of mess!

Yvonne came home from the beach. It's nice hot summer weather but her feet are all covered with a fresh sand. It's not a problem at all. Yvonne tells Alex to lick and swallow all sand from her soles. Yvonne coerced the slave to chew nasty sand and then swallow it. When poor slave are finished with one foot Yvonne tells him to lick the other one. Alex suck Yvonne's toes and eat all sand that comes into his mouth. When the slave is finished with both feet he feels a little bad, but who cares? Yvonne is not. She just wipes her feet on the Alex's face and goes away.

This slave brought along a sandwich for lunch Â and he really thought I would let him eat it just like this?! He should have known better! I take the sandwich and add a lot of spit - before I throw it into the dirt and crush it under the dirty soles of my boots! NOW it's a proper slave sandwich! Obviously, the wet sandwich mixes with the dirt and it's a completely disgusting mess - but I coerce him to eat it anyway. He has to eat every little bit from the boot soles and from the ground - he's not allowed to waste any food - especially not food that has been treated by me :-D

As many know I've recently become Sasara's real life slave so we've been shooting on a nearly daily basis (she never asked, she just 'shows up' at my place). Sasara wanted another shoot a few days after we did a scene called 'Sock Bully'. Knowing fully well how much I hate feet, she wanted to try things a little differently this time around. She put a collar and leash on me, handcuffed me, taped my mouth shut with duct tape, then proceeded to crush my face beneath the hard soles of her boots causing me to grunt in pain. "How does it feel to be my little slave?" she asks with a smile."Now you're going to smell my socks cause you don't suffer enough." To my complete ******, when she peeled off her knee high boots, she was still wearing the same Hello Kitty socks she wore from our first shoot DAYS ago! She never even took them off! She wore them out even more! -Just to make them smell stronger and more pungent than the first time so she could see me squirm while enjoying my reactions to smelling her smelly 'over worn' socks!"Now smell them." Sasara insists smothering my face in her stinky pungent socks that were over one week old! To make things worse she peels off her socks making me lick her bare feet to clean off all the pungent sock lint! Asking me to "Smell them also at the same time." as I smell and lick her sweaty soles with my tongue hoping she will end the shoot soon. After licking her feet she tramples me beneath her fullweight crushing my rib cage -forward and reverse trample! I film a nice POV shot of her crushing me and in this video I include behind the scenes footage of me getting that angle for you guys to enjoy as she crushes me filming her from below!EXTRA SCENES BEFORE/AFTER END CREDITS FEATURING AN ALTERNATIVE CAMERA ANGLE OF THE SHOOT AND BEHIND THE SCENES FOOTAGE TAKEN FROM A 2ND CAMERA! 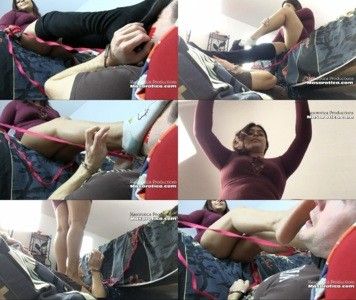 Watch me shit on the car hood bst way i know howÂ I let out a big log all over them. I'll make you gobble my shit right from the hood of the car.Ahhh, it felt so good to relieve myself of that. Once thatÂs done, I donÂt show you the pile of poop on the car. You get to watch and worship my ass. Get ready to watch a freshly pooped ass, bounce!Shitting on the Car Hood Feels Amazing...

The sweetheart is completely restrained with rope and there is nothing she can do about it! Without further ado, the guys stop fooling around and begin with their real naughty and dirty intention with the woman! They direct their attention on her asshole and then take turns finger fucking it to grab as much feces as they can out of her rectum! They would then use all of it to spread all over the womanÂs body, consequently creating a huge mess!

First the slave is handcuffed and then followed by a hard slap in the face by Mistress Allegra Smith, this is interrupted now and then only by spitting on the slave, but the main content is Lady Smith's brutal slaps.

You are the small victim for redhead Lady Karo today. The sporty Mistress wants to crush you under er feet and her ass now. The puts you little over on the floor and stomps on you with her bare feet size 40 eu. The she presses her sporty ass on you and she wants you to smell before she destroys you under her weight ...

Im doing a shower, so why to dont clean everywhere ! Outside and inside! I can tell that was a very dirty shower with shit and smearing... Lick me clean after shower ))

Redhead Mistress Karo removes her beach feet and wants you to lick her sweaty bare feet size 41eu. She rubs her bare soles on your face and orders you to suck each of her smelly toes.Â

n070 Princess Joel These are spitting and blows in the faceHard slap from Lady Joel. Her hands abruptly and roughly lie on your cheeks, leaving red traces after him. This is a loud slap on the cheeks. And not only. These are spitting and blows in the face. The girl does not spare you and beats with all her might. She orders her white shoes to lick, and then sits down, stretches her legs to your lips and makes her lick her feet.

I've put the slave in the smother box - and start by standing on his face shortly. But he's not only getting his face trampled today ... he's going to lick my sweaty feet while he's trapped in the box! I order him to lick all the dirt and sweat from my foot soles and he obeys - not that he'd have any other choice with his head in the smother box! Again and again I rub my foot soles over his tongue and enjoy how he's suffering. And of course, he has to suck all the sweat from my long toes as well - and lick between the toes! Maybe I should make it a little harder by standing on his chest with one foot while he's coerced to lick the other one?! :-D

The girls are wearing socks. They stand on his face, they stomp on his stomach. One of them is holding a camera and filming how she sees it from her perspective. They have no restrictions when it comes to trampling, they also stand on his neck and one of them even says "harder, harder", asking only if he is alive :).Time: 13,14 min.

A young woman takes a walk in her white-red classic London Buffalo boots. She finds some wild flowers at the side of her way. And she enjoys her wondeful shoes and the great day.

137113 - INHALE COUNTDOWN - I fuck your brain and your bank account! (small version)