Damn! Here's 18 y.o. Ariel's First Experience with a slave at her feet and it seems like she really enjoy it! She was curious before to know how he would react with her stinky socks on his face after a long day with her converse! Ariel sits on her slave and makes him take her shoes off then immediatly cover his face with her sweaty socks! She makes him breathe through her nasty white socks while reading her magazine and relax! Your face is like a real paradise for my feet! I love it! Ariel also makes him take her socks off to smother his face with her sweaty barefeet! Do they smell bad? Does it turns you on? She makes him lick the bottom of her feet with his tongue and also rest her cute little toes in his mouth with a cruel angel smile on his face! Another Priceless First Experience and a Complete Footrest for Ariel!

Stacey sits on a metal railing & rests her sweaty dirty feet on Mark's face, he must lay there whilst she breathes in the fresh country air as he is forced to smell her feet.

Cant sleep?hundred of nasty dreams keep hunting your mind?Well its not a secret anymore Im a powerful woman and I know everything about you.I know everything about your nylon obsession, about your addiction for sheer pantyhose ....you are already naked under your sheets so start wanking slow for ME and fallow all instructions.you will never forget this night for sure .My sexy nylon legs will make you more weak...more addicted..you will pray for more . you can take it as a simply game but soon you will realise Im your big obsession...nylon seduction

Welcome to My fabulous life loser! Im young, hot, blonde, have the perfect body and above all a real stuck up bitch! But thats why your here right? You absolutely love My bitchy attitude, it gets that dick rock hard! Oh and Ive decided to make the price a bit higher because I can! Now buy up asshole HAHAHA

Nadia tramples Walter in her big winter boots, leaving some pretty nasty boot marks over his pale white skin! She begins experimenting with stepping on his throat! She nearly loses her balance a few times and could have easily crushed his windpipe! The close-ups are incredible! At one point she accidentaly shifts her entire weight onto his throat, lifting the other foot completely off his chest for a second, and leaving only the one foot crushing his throat causing him to choke! nadia appoligizes for the accident while giggling and continues applying pressure over his throat! This scene is worth the purchase price alone! 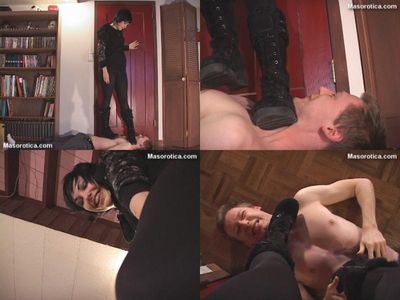 So many peuple told Me im so creative, about the way how I test my slaves, make them test their limits and much more. What you will do for Me today? Good question...Im in mood to control your orgasm, make you go to edge and then come back, make you sacrifice your orgasm for Me, make you Freeze your sperm...How ? you need some ice cubes or better a snow ball.What? Are you afraid your cock will get scared and will hide inside your asshole?

Holy Fuck! It seems like Samantha really knows about your fetish for now! She really shows attitude and authority in this clip here where she wants you to obey her commands! She wants you down at her feet to lick the bottom of her dirty shoes! She laughs at your fetish before she takes them off to cover your face with her sweaty nyloned feet! Take a deep breathe in my smelly feet! This is what you paid for!Samantha also takes her nylons off to insult you with her stinky barefeet in your face! She wants you to lick the bottom of her soles as a good little bitch! You will also have to suck her toes just to please her!

Lady B put in every Nylon on completely Banana, slide in with her pretty Feet, and put on her sexy Mules and walk arround. She crush the Bananas comletely in her Nylons.

Cruel Girlfriend Roxy wants to ungag you for the final stage of your ordeal so that she can revel in your relentless screaming, begging and crying. She continues to unleash a truely sadistic array of torturous punishments on your stapled loser-stick. Using her heavy metal clamp to squash your useless cock and balls to the brink of bursting. Roxy ensures you can't avoid witnessing your own pitifull abuse by clamping youreyes wide open. You'll have no choice but to watch as she destroys your balls and leaves you with scars that will stay with you for the rest of your worthless life.

Do you find yourself wanting to worship Me beyond your understanding? Well what do you say we take this a step further, marking you while absorbing you into My cult ;) Here you will find your first initiation...

Wow, that's one hot jeans Kasha is wearing today - it's bright pink and Kasha's ass just looks amazingly hot in it. She sticks her ass into your directions, spreads her legs and shows you her sexy pink jeans.

Damn! Here is another hot clip from last summer with Kristina where shows her feet after a long day in class! She begins really early in the morning so her feet are kind of sweaty around five pm! It was also raining like fuck so she had to walk in the rain with her filthy skate shoes! That why her socks are all fuckin' moisty! You can almost hear the rain storm in the clip! Kristina just make fun and take advantage of your foot fetish then rub her stinky juicy white socks all over your face! She also take them off to feel your tongue and your nose at the bottom of her soles! Make sure you also refresh her toes!

Holy Fuck! Here's Another 18 y.o. Mean Chix from Da New Generation! Kathy teases you with her Converse before she takes them off to use Your Face as a Foot Stool! She completely covers Your Face with her Stinky Socks since she knows how bad you Go Crazy for Stinky Feet! She makes you lick the bottom of her socks then she wants to know what does it taste? Kathy takes her Sweaty Socks off to smother your face with her Stinky Bare Feet Again! Take a Deep Breathe! I had my Converse All Day Long! You'll have to introduce her to Foot Fetish and show her how you can be a Good Slave by Suckin' her Cute Little Toes! The funny thing is that Kathy's Boyfriend gives a Phone Call during the clip! Make sure he doesn't catch you sniffing her Feet! Think you can please that 18 y.o. Brat? You're in Trouble!

Its time we have a talk hubby! Im here to tell it to you straight- I found an amazing guy! He is the complete opposite of you. He has huge muscles...you know how I like big muscles...not to mention he has a huge cock as well!!! Mmmmm hes just what I want and you, well...not so much!

You know who you are... looking all creepy in the corner staring at all the hot girls at the club... lol... trying to get a glimpse of our pretty feet... you fantasize about following us home & sniffing our sweaty stinky shoes after we kick them off after a nice long night of dancing... so here's your chance SLUT!.. that's what you are... EVERY girl you see is just another set of pretty feet!.. go ahead & sniff my smelly boots!... lick my stinky feet & my sweaty toejam!!.. this is what you've been waiting for all night long isn't it??... EWW!!.. Did you just make a mess??.. your so Pathetic!!... See you at the club next week SLUT!... lol

Diana wants to train her slave's breathing once again and puts on her smother gloves for this. Then she starts right away, first gently then more and more aggressive she prevents him from breathing. He just isn't worth breathing the same air she does.

19 year old Courtney sits on a boy's face for the first time! Like all our first experience clips, her reactions are priceless, making this clip yet another gem! She asks questions and giggles like a sweet innocent school girl! Courtney also happens to be an amputee, making her a unique member of our strong team of girls! 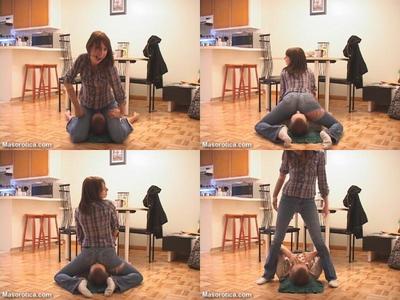 Incredibly hot clip with football fan Mistress Yurizan seductively talking down to Her audience of slaves. Check out Her spreading Her toes so you can see where She likes "filthy dogs" to lick. Hot!!

What gets a boy like you all wound up? Thats right- tits and ass! And boy do I love to flaunt My perfect assets in your face ;) How many rounds do you think we can go huh?? 2? 3? 4?

A gorgeously sexy girl gets partnered with 'Retarded Boy' for a school science project on dirt and sweat! Seeing as how he's mentally challenged, she's stuck doing all the work! Worst part is he won't shut-up and keeps yapping his mouth off! That's when she gets the idea to use him in her little science experiement!

She gets him to lie on the ground beneath her feet and tells him to lick the bottom of her shoe so she can take notes on different tastes and textures of dirt! With one foot placed on his chest and one over his mouth she tells him to begin the experiement! "Just lick! Finally with your mouth full I can get some work done!" she says taking notes as he describes the tastes and textures of the different kinds of dirt beneath her shoe! Dust, pebbles, dirt, etc. His tongue palates must wipe across everything she ever walked on!

"What does it taste like? Describe the taste?" Kaylee asks her retarded science partner who's face at the moment is beneath her shoe! "Dirt" he replies! "Dirt like on the road, or dirt like under the grass?" she probes! 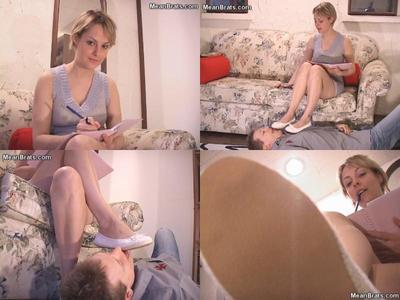