27187 - Spitting punishment in the restrooms

My little worm is bound to the toilet bowl as I sit on it and laugh down at him. He knows that he has been a bad boy yesterday and he didn\'t do his duties well enough. So I think it would be the best to put him back on the dirty ground of facts. Fact is that he\'s a loser and a slave. Just there to do whatever I say. Now I break him by spitting right on his face. He cannot move so I make a game out of it, trying to hit his mouth and forcing him to swallow my delicious spit.

i invest with HBIC...do you? Mistress Yurizan let us come over to session & film, Her choice of humiliation. The Miss prefers shoe-licking, sole-licking & toe-sucking.

She overlays an audio track of Her soft, sensual voice saying "That's a GOOD puppy"...She loves speaking to Her worshippers like They're Her pets. Hot clip!

Sarah is wearing a belly dancers outfit & does running butt jumps on the slave on the couch, she then sits on him & does lots or hard bouncing with her butt on his chest, she does more running butt jumps & she doesn't stop until she is exhausted.

Mistress Precious shows Poor Willy who is the boss.He belongs beneath her feet as she tramples all over his body .

Damn! Here is another hot clip with this cute little Angel where she needed to rest her tired feet after a long day at college! She feels like watchin' a movie so she makes this loser slave lay down on the couch in the opposite position! She orders to take her boots off to use his face as a perfect spot to rest her sweaty feet! She sticks her socked feet on his face with a devilish smile because she knows how bad they stink! She just like the fact that it's so easy to abuse this loser! Alexandra also takes her socks off to massage her stinky feet on his face while watchin' her favorite movie! She makes him lick the bottom of her soles to refresh her sweaty feet after a long day in her boots! It seems like this Bratty Chix knows how to take advantage of this loser! She almost falled asleep with her feet on his face!

Daidra is wearing a beautiful red dress, shiny black leggings and sexy red high heel shoes when she enters her Skoda. She just loves the sound of a revving engine! She pumps the pedals with her sexy shoes and you can hear the engine howl. She later takes off her high heels but continues to push the pedals with her bare feet. Exhaust close-ups are also included!

Holy Fuck! Here's another Amazing clip with your favorite Dreamgirl! Cassandra is going out on a date tonight so she wants her boots cleaned! She knows how this loser would do anything to please her so she makes him lick and shine the bottom of those dirty boots with his tongue! She realizes how his tongue is becoming black by licking her boots so she laughs and takes a picture with her camera to show her boyfriend!

Annie weighs 10 stone (140 lbs) & Sarah is 11 Stone (154 Pounds) that is a combined weight of 21 Stone (294 Pounds) & the girls both stand on his head at the same time using their combined weight, how much pressure can a human skull take? Sarah & Annie are about to find out, the girls repeatedly stand full weight on his head at the same time facing different directions the girls giggle & laugh as they try their best to crush his skull, Mark feels an immense amount of pressure on his skull & really does feel like his head is gonna cave in, 3:10 into the clip the girls trample his back & head at their own leisure.

"Squish on! Squish on!" Nadia shouts to her two friends as she sits right in the middle! Alika sits on his face as Nadia's friend Gabby sits to her left! All three girls are sitting across Walter's body, squishing him into the couch beneath their tushies! Gabby gets up to bring the girls beers! As the girls enjoy their ice cold drinks, the boy suffers and sweats beneath their hot sweaty bums!

The girls talk about all kinds of things as they continue to enjoy their drinks while ignoring the boy beneath them! As the girls begin to talk about jobs, Nadia says "I'm just a bum who lives off Walter's pain!". The girls start bouncing up and down on him squishing him further into the couch! Nadia after starts slapping the veins in his arms as the girls laugh at him! After s while of sitting and squishing him his body slowly becomes limp! "It's a rollercoster!" Nadia shouts as the girls sway over his body like a ride in the amusement park! "He's like de@d!" Alika says. "I think he cried!" Nadia says laughing. "I'm gonna break some of your ribs today Walter!" she says bouncing on him again!

The girls switch places after! "You're de@d now!" Gabby says! "We're switching spots, and her ass is bigger so it'll engulf you!" Nadia says laughing! Gabby asks if his face is suppose to be pointing a certain way. The girls laugh saying his neck is probably broken under there! Gabby bounces on his face and wiggles her bum side to side! Nadia makes jokes about his neck cracking!

ANOTHER FUN, HIGH ENERGY PARTY CLIP FROM THE GIRLS OF MASOROTICA PRODUCTIONS! 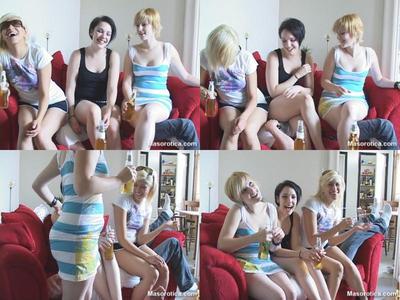 Holy Fuck! It seems like we really are in trouble for now! This 18 y.o. Brat Chix Brittany just responds to an add on craiglist offering a Free Boot cleaning Service! She didn't knows before that it was all about a Human cleaning Job! She was really surprised to know that this loser could bow down on his knees to lick and clean the bottom of her dirty boots! She felt a little guilty but once she knocks at the door, there was just no way out to deal with it! She explains about her high expectations on her boots and makes this loser work on them! No Sympathy for this boot bitch! The only thing she cares about is the result on her boots! We'll have to remove this stupid add before we really get in trouble!

Sarah tests out 2 pairs of shoes on her slaves head, she stands full weight & tramples on his head & faces all different directions as Mark groans in pain, satisfied she has hurt him in those pair of shoes she then slips on the other pair & hurts him with those too.

Wow, Daidra just looks amazing in this Clip and yet she's so merciless! She places the stuffed puppy right in front of the front tire, gets back into the car and drives right over it. The little victim has no chance and gets totally flattened under the massive weight of Daidra's car. She even stops right on it and turns the steering wheel - until it's grinded into the street!

Daidra is wearing a beautiful red dress, shiny black leggings and sexy red high heel shoes when she enters her Skoda. She just loves the sound of a revving engine! She pumps the pedals with her sexy shoes and you can hear the engine howl. She later takes off her high heels but continues to push the pedals with her bare feet. Exhaust close-ups are also included!

Goddess Pio bounded her slaveÂ´s hands and legs together and She forced him to lick Her sweaty converse sneakers. She id kicking him to stomach so hard for more times! And again force him to lick her sneakers. She spit on the floor and he must lick all her spit from the floor! Short but very good clip. 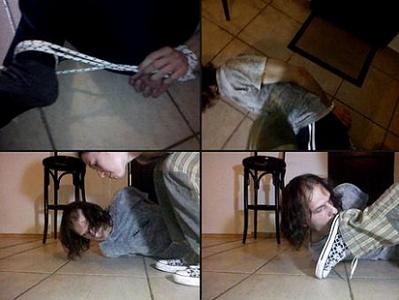 You are in big trouble fucking with me. I am so powerful and magnificent in my dominant latex attire and you are nothing more but a weak wimpy pale maggot beneath me. Watch your punishment in action as Princess Simone demonstrates how she despises anything born male. Your gender is trampled, stretched degraded then completely annihilated!

After the last clip I have decided to keep that stupid jerk bound at the toilet for one day because he looked so happy as he swallowed all of my spit. So I visit him the next day. While I sit on the toilet I keep resting my shoes right on his chest and make him carry them. I light up a cigarette and start to call my best friend. We talk about anything and in between I make my slave breathe my smoke. I laugh as he coughs. Then I leave the toilet without even speaking to him anymore.

No I don't put you to sleep or play cheesy soft music in the background... But I do speak to you softly & tease you in a very sexy & sensual way with my perfect pretty little feet... I command you to stare at them while I scrunch my toes & flex my sexy high arches & make your cock drool... lol... I drive you insane til you just can't take it anymore & have no other choice but to lose your load everywhere!... he he... I say things like ***** stare at my feet * their so pretty * they make your cock so hard * your cock is drooling in your pants * take it out & stroke it * stroke it hard & fast while you stare at my pretty toes * my soft sexy soles make you rock hard * sniff them * lick them * stroke it faster * my pretty little toes love to caress hard objects like your nice hard shaft * put your cock in between my feet * keep stroking it * your going to explode * stroke it harder * stroke it faster * cum while you stare at my pretty lil feet * make sure you get it all out ***** :)

Do you love long hair...long red hair? My hair is getting so long now isn't it. Its past my bra strap. Should I grow it out longer? Admire my silky soft tresses 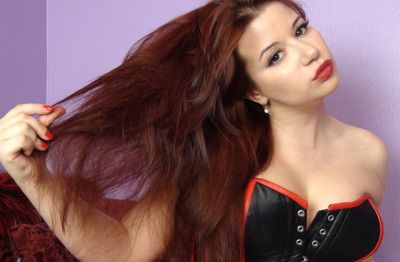 I\'m just finished with my daily workout for now. Well I think it\'s about time to relax. First I need a nice comfy place on my slaves face. What a good boy, he\'s already lying there offering me his head to sit on. Well then let\'s lower that ass and smother a slave. That\'s good! I love making him smell my ass after I did my workout session. I make him carry my weight with his face all the time and there\'s nothing he can do but take it like the pussy is he is.

28394 - Human face footstool and high heel trample at the riverside

Mistress Lydie relax at the riverside and use the face of its slave like a footstool, she make him lick its soles, smell its stinky shoes and feet and finish by trampling him hardly, she jump on his balls, crush his face without any pity.