Blond and sexy. Maria Valeta has a lot more on offer than you could actually imagine. She forces her victim down, lets him feel the power of her heels, while he is meant to lick and kiss them. Taking her shoes off, he will start smelling her feet, does he hope, he'll have to lick her or will she force him into sucking her toes? He will have to do how she says.

Mature lady Tanja has bound one of her boy-toys on a bench. She's dressed in sexy dessous, stands right over him and drops her beautiful body on his chest and stommach. She has so much fun torturing the poor boy under her ass!

Mature Mistress Tanja facesits one of her boy toys in sexy dessous. Smothering him under her big beautiful ass. She even presses her ass cheeks to increase the pressure.

Mature lady Tanja has bound one of her boy-toys on a bench. She's dressed in sexy dessous, stands right over him and drops her beautiful body on his chest and stommach. She has so much fun torturing the poor boy under her ass!

Every day Im dancing around in my mirror looking at my ass! Wouldnt it be great if I could transform one of you butt bois into the mirror on my wall? Everyday you will have the privilege of doing nothing but admiring my perfect ass you worship daily! In this clip I show you exactly what that job would be like!

Now, this is what pony did not expect- Sandra is giving him a riding lesson which demands quite a lot of the unexperienced pony! Watch Sandra, sitting on his back in tight jeans and cowboy boots giving precise instructions while the pony would get more educated and better - if not he would feel her heels deeply in his ribs!

Daidra makes her pony run faster through the room and when *it* would become slowlier, he would get a smack on his backside! The pony is gasping but still seems beeing very motivated - no wonder, just look at the sexy butt of the hot mistress covered with a string-panty only and her long legs in black stay ups!

I've a special suprise for my slave today. I already put him under a chair and sit down on it while i chew on my chewing gum. I drop it on the floor after i teased him a little bit with my black boots and step on it. Now he has to eat it from the sole of my boot! After he kissed my boots while they stand on his face for some time i take them off and begin to slap his face with my feet until it goes red!

Italian Gioia revvs the engine engine but wearing sexy white high heeled boots this time. Filmed from the side of the drivers door and the passenger seat so you can see her beautiful face as well as the great pumping action.


This is another very hard clip in which my dirty slave has to endure 500 hard faceslaps just for my fun. I am wearing some beautiful black gloves so that I don't have to touch his dirty and ugly face an in addition a beautiful and breathtaking leather outfit. See how my slaveÂ´s head gets pushed left and right because my slaps are really hard. After a while I even start to box his ugly face with my fists and he looks so stupid while taking every hit and slap. After 250 slaps I take a break and my slave has to lay down in front of me while he gets tortured with the heel of my beautiful black boots. Then the cruel punishment continues and I start to hit his face again very hard so that he even starts bleeding. But that's not a reason for me to stop and so I continue to hit him. He starts making mistakes counting every stroke and somehow he always counts less than he actually got, thatÂ´s so much fun for me! After he has received the last and 500th hit you can see how helpless he is and I am fed up hitting his ugly face. At the end he remains kneeling while I am going to fresh me up.

Gina is wearing a really short and tight business outfit with black suspender straps and seamed nylon stockings. She is sitting in front of you on a chair with a pair of sexy 5 inch mules on her feet, looks right into your eyes and crosses her nyloned legs again and again, stretchin her long legs and feet right into the cam and dangles her heels provoking you to touch them with your tongue...

Gina got a new pair of shiny black 5 inch stiletto boots which she wears for the first time today. Although it is a little muddy outside, she walks through a park with her heel sinking in the soft ground...then she walkes on strictly on her way and the dirty stilettos leave a loud sound on the hard ground. Long walking scenes, Gina only stops to light a cigarette and for some posing on a stairway! Total lenght is 10 minutes and 46 seconds!

57 minutes video of Luna inflating balloons with helium and playing with them. Luna is huge star in Japanese balloon fetish community and was featured on Japanese TBC TV station, as well as on Sexcetera Playboy TV Show. 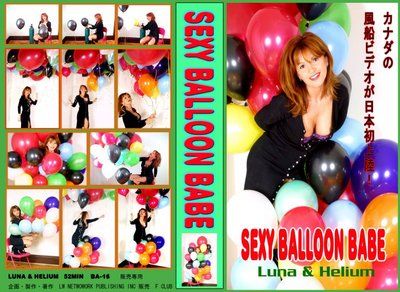