Today with my friend Alisha, we are going to have the ball busting challenge part two. We have added another slave to increase the competition. We'll see just how much our slave can take. We have had them locked up in the cage while patiently waiting for us to arrive. As we release them, they crawl to their positions where we stand them in line to have their cock and balls inspected. It's time to begin the competition and we tell our slave to make themselves ready. The rules are simple. Last to remain standing will be the be the winner. To get warmed up, we begin with some soft kicks. We don't want to injure our bitches just yet. As our slaves begin to buckle, we decide it's time to increase the competition. We remove our shoes, and start to really kick those ball a lot harder. It's not long before our slaves begin to drop, and one a a time remain down. With only one of them still standing, we give him his last pulverising kick. As he fall to the floor, he is rewarded with some trampling and allowed to kiss our feet. It's been a great competirion, and Alisha and myself are worthy ballbusting champions... 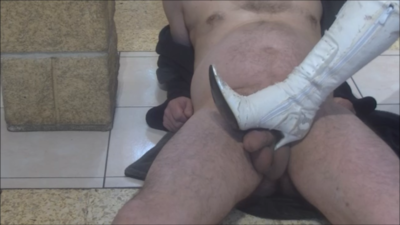 Princess Amber doesn't just keep her slave for fun. He must also carry out tasks as a slave and must work for the mistress! Today he was supposed to clean the apartment in her absence, but he did not. Now he's feeling the harsh consequences of his misconduct. Princess Amber hits him hard and threatens to clean his face in the toilet in the future. She educates her slave with firm blows on his ass to turn him into a real cleaning bitch!

Look closely what's coming for you! These are my hot nylons - and you're already horny for them, aren't you?! Nylon feet drive you crazy ... I can clearly see that! You'll smell them and inhale deeply, nylon slave. My foot smell will imprint in your slave brain - and you'll love it more than anything else! Press your nose on my nylons firmly - and then you'll lick my bare feet. I want the smell to be gone for good! But before you'll be granted this honor ... you'll suck all the sweat and stink out of my nylons. And trust me ... there's a lot of sweat to suck out!

It was so much fun torturing my slave by throwing balls on his tiny balls that I wanted to do it again right away. But now the slave's bound on the wall and the balls will be thrown even harder! Real extreme ballbusting that takes the slave to his limits! But he can't do anything anyway - he's bound and completely at my mercy!

Renee is back once again with a Great EFRO Treat!! This is one of my favorite long term FUNKY ladies!! One that is CRIMINALLY slept on this store, but one of my favorites from my original store! Renee has only gotten thicker and sexier with time and her newest batch of clips have been nothing but the truth!! She begins this one by showing off that thicker ass of hers. taking her time sashaying and Spreading her cheeks. Then she squats in front the camera and pushes out two nice size logs! Just when you think sheÂs done, she squats back down to push out even more! Stubborn bastard must have dangled in her ass for a good minute holding onto dear life!! Then she plays with her work once done, moving the logs around before picking them up in the napkin she released them onto and dropped them in the toilet for flush. Another round of big logs from this Brownskin cutey pie!!

Miss Lilly Malbert tortures her slave under her feet. She gets her feet licked clean and she spits in his face. With her wonderful feet, she rubs her spit in the face of the foot slave. The slave has to lick the spit from her bare feet. Again and again Miss Lilly spits in his face. She humiliates him and laughs at him.

95829 - Humiliation in the shit on latex mattress

Miss Lilly Malbert tortures her slave under her feet. She gets her feet licked clean and she spits in his face. With her wonderful feet, she rubs her spit in the face of the foot slave. The slave has to lick the spit from her bare feet. Again and again Miss Lilly spits in his face. She humiliates him and laughs at him. 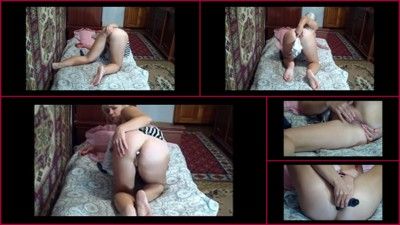 Lisa prepairs for the wedding party of her friends. She is almost ready, but in final moments she remembers about pedicure. It's not a problem, when you have a good slave - pedicure helper. First she tells Alex to lie down on the floor and be a good footstool. Lisa takes off all dirt that stucks inside her nails and put it on the slave's tongue, then he swallows it. She also sharpening her nails with a nail file while slave's mouth are open. Of course all disgusting stuff are drops inside it. When the slave is finished with swallowing all this mess Lisa tells him to change his position and be ready to lick fresh toe nail polish. Lisa paints her toenails with nail polish and when she thinks that it lies not perfect, she tells Alex to lick it fast, before it dries. Sometimes she use cotton circles with nail polish remover to make a clean job, then she put it inside the slave's mouth and tells him to swallow it. Today Lisa was in rush, so many toenails she must remake. It's means for Alex to eat a lot of nail polish today. So when Lisa is finnaly depart to wedding party her slave stayed at home with pain in his belly. But who cares? We hope Lisa have fun at the party :)

I washed the shower, and I longed to defecate. By the way, in the bathroom was an empty toilet. I told him to lie down so that I was comfortable shitting in the mouth. I had a lot of shit. You will see from different angles successful my sexy ass. You want to be on the place of my slave? In this video especially for my slaves I shot my long sticky turd. They are really big.

I've wrapped the slave in cling wrap - and now he's completely helpless and unable to move! It's been a really hot day again and I've been walking bare feet for the last few hours and my feet got really sweaty and dirty ... and he'll have to lick them clean now! He's struggling with the salty taste and the crumbs of dirt ... but he can't get away from my feet. He'll clean them heels to toes and suck the toes clean as well. I enjoy seeing him suffer like this and enjoy getting my feet refreshed at the same time!

I ask him: « you love my ass, donÂt you? » He said: « I love your ass. Best in the world. »I enjoy my dinner, which will be his dinner soon as he begs me for my shit and make love to my poop chute.

It was so much fun torturing my slave by throwing balls on his tiny balls that I wanted to do it again right away. But now the slave's bound on the wall and the balls will be thrown even harder! Real extreme ballbusting that takes the slave to his limits! But he can't do anything anyway - he's bound and completely at my mercy!

I'm with masterslave and we are having a relaxing chat about slaves. I have one that's been in a corner of the dungeon all morning, and I decide to bring him to kneel before us while we enjoy a cigarette. I ring my bell, and my slave crawls over to us and takes up his position. I inform him he's going to be used as our ashtray, and he has to remain on his knees until we have no more use for him. As light up and begin to enjoy our cigarettes, my bitch of a slave is a bit figity. So I decide to punish him by making his situation more painful. I get a jar of chikpeas and pour them onto the floor, then tell my slave he has to kneel on the peas. As he kneels on top of them he lets out a squeal, the peas are extremely painful as they are very hard and dig into his knees. Our bitch is warned by master slave, that he will be severly punished if he does not remain upright until we are finished our cigarettes. We continue smoking, and take pleasure watching our slave desperately struggle with his painful suffering from his chickpea torture...

Mistress Michelle gets the pig out of the cell. He is allowed to drink her piss. After that, Mistress Michelle shits on his hands. A big shit pile of shit that the toilet slave has to eat now. Then he almost starts to puke, which makes Mistress Michelle angry. After he has eaten everything, she puts a rubber mask over his slaves head and stuffs an inflatable gag into his smeared mouth.https://www.yezzclips.com/store598

After a long walk on a hot day Miss Lilly Malbert enjoys the fact, that a footlover removes cleans her dirty sneakers, sniffing inside her shoes and worship her warm moist socks and her sweaty feet . She loves to feel his tongue moving up and down again on her soles and she loves to feel his mouth sucking her sexy ling toes.

On her first day of work as a maid, this sweetheart receives unusual requests! She is made to stand in a small confinement and then lift up her skirt! At first, she hesitates, but not wanting to lose her job, she later gives in to the demands! The man then rubs her crotch, causing her to moan in pleasure! Though, it doesnÂt last long, instead, a glass is positioned underneath her which she is made to fill with her piss! By the time she is done, she is bent over and gets her legs caressed! Eventually, the man starts wanting more so he takes off her stockings and then spreads her buttocks apart! He then later gets himself access to her asshole and gives her an enema! In no time, she is squirting fluids and feces all over the floor!