Mara's in total control of this loser. She wants him to sniff her ass and that's why she sits down on his face. The poor guy's already exhausted, but Mara only changes her position quickly and then continues ... bad luck for him!

Candid footage of ElegantBarefeet.com's 6th of December 2012 Los Angeles foot party, where addicted foot perverts embarrassing & humiliating themselves to worship feet in building elevators & in front of people inside the foot party.The Goddesses make sure the slaves hand over plenty of green-backs $$$ for the honor and privilege of letting the foot-pervs worship Their lovely feet.

Once again Steve cannot get out of this new hold : Pin / Double Hand-Choke and he is totally at the mercy of Liz !! 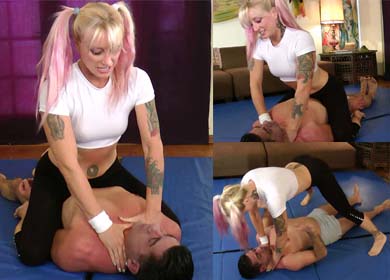 Svenja wears her sexy white denim shorts. Beneath she wears a hot red thong which she pulls up slowly when she sticks out her hot butt. That's sexy whale tail posing for you. 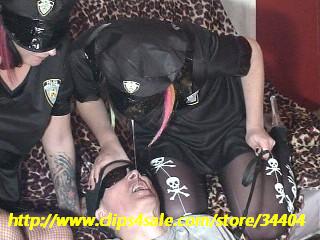 I have to put you in a box! And there you will stay forever. Because you are a fucking loser! How do you feel? You want to suck my gorgeous feet? Sorry but that won't happen! But you can smell them. Take a deep breath. That's what you like, don't you? You don't want to be in your box anymore? You are hungry? I told you before ? You will stay here FOREVER! So shut up! But you can smell my feet one more time...

What's up, little pay pig!? You aren't looking that happy...!? But it doesn't matter! Come on - give me all your bucks! But only the big ones! You can give the pennies to your wife! My life costs so much more than hers! But... when I'm looking at you... you are sooo ugly! And your dick is so tiny! I believe that I'll give you 50 of the bucks so you can buy a penis pump... or maybe a new mug! You are so a disgusting loser!

It's getting perilous but thrilling too... 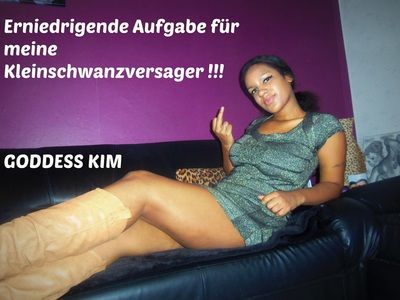 Sarah pushes her slave down on the bed whilst wearing a short demin skirt she sits down on his face smothering him under her white panties, he is pined under this girl & now he is struggling to breathe whilst stuck between her legs, she sits all different ways on his face flashing all of her white panties & smothering him in both the crotch of her panties & under her butt.

You are such an idiot! You are stupid! You are a loser!! My arrogance an my divinity fucks you and destroys you completely!

here is a new clip with our headmistress swetlana. this one is for the one who like to be dominated by an arrogant lady in leather. starting at the tips of her black pumps YOU may be allowed to get up to her leather trousers, her leather top...you may also look at her leather bustier and how she is taking out a slim cigarette of the box. you know...as swetlana is from russia all those arrogant bitches there smoking slim cigarettes... it looks quite bitchy as this superbeautiful lady blows the load of smoke directly to YOUR face and it seems, that she is looking through YOU with those brain fucking cat-eyes... but... its also YOUR lucky day today slave...because YOU will get the honour to be her human ashtray! so open YOUR mouth as far as it goes she will instruct YOU...and YOU will do... if YOU are into a superbe beautiful dominant lady humiliating YOU with smoking this one is definately for YOU! GERMAN LANGUAGE - but easy to understand... 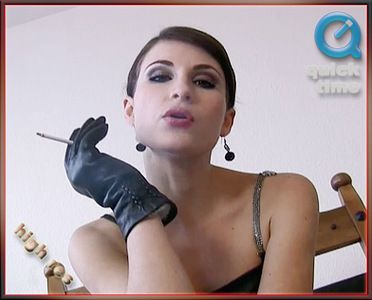 Audrey lost her last challenge with her slave so this time she wore the same pair of socks for a full month just to make his life harder! She wokes up at 6am every morning to serve breakfast as a waitress and she had to leave those socks in the place for all the month! The only problem is that she had to put them in a plastic bag after a week because the smell was too strong! This morning was not an exception apart that she kept her shoes on after her shift! She explains the rules to her slave so he will now have to survive with his nose in her socks for thirty minutes! If not? She gets a two hundred dollar bonus! That was just a terrible experience! You guys have no idea! The smell was horrible! Everything is permitted so she just enjoys to watch him lick the bottom of her dirty socks! The smile on her face worth a million dollars! This girl loves to dominate!

Goddess Eerika and Goddess Victoria love to sit at the porch of their favorite club and to start their drinks there. It comes without saying that the slave must start cleaning those dirty shoes right away. After they feel that the shoes are clean enough it's time to go into the club where the slave must get under their feet and fine polish the shoes before he continue working on their sweaty feet. Of course he will be strictly guided through the process and will be punished for any mistakes he make!

Let's face reality. Your penis is far too small to ever be considered for a boyfriend. It can't possibly satisfy me. I don't have boyfriends. I have slaves, my cuck, and big black cock studs. But because I think your so pathetic that you're adorable. I created a special position for you in my life. You can be my puppy toe kiss slave. That's right. You'll be my very special doggy. All because you amuse me.

Vanessa couldn't believe when she heard this guy actually likes to be trampled - well, she'll put that to a test! She's entering her room wearing a stunning green dress and her golden high heels. She tells him about knowing his little secret and that she'll put it to a test. She doesn't bother to just stand on his chest, but rather jumps a little, steps on his face and tells him how she'll just crush him if he dares to peek under her skirt. When the slave's still moaning after she took her shoes off she takes that as a personal insult - she isn't that heavy after all and he's supposed to like being treated like this! She rubs her sweaty feet in his face and even steps on his face and head with both feet and her full weight. The slave has to tell her how beautiful and sexy her feet are before she finishes him off with some jumps and then leaves him - for now at least! 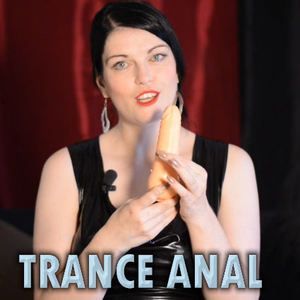 Holy Fuck! Let me introduce you here one of the most cruel and sexy goddess on our site! This 18 y.o. Brat Avery will totally drive you crazy! We told her about our famous sweaty socks challenge and she just couldn't resist to try that experience! She has been wearing the same pair of socks for a full week now and our slave will have to deal with her sweaty feet in his face for the next thirty minutes! If not? She gets the two hundred dollar bonus! She proudly explains the rules to her slave now and makes him takes her sneakers off to completely covers his face with her sweaty funny socks! The smell was horrible and nasty but it seems like she just takes pleasure to rub them all over his face with her cruel 18 y.o. smile! The funny thing is that she actually gives herself the right to spit on his face as many times as she wants! She makes him lick the bottom of her dirty socks, spits on her socks, and makes him lick that juicy spit from the bottom of her socks! It seems like she loves to spit on his face and rubs her sweaty socks on his face full covered of spit! This girl just loves to humiliate this loser slave! That's what they called the new generation! Avery also makes him take those dirty socks off with his teeth and pushes them really deep with her toes into his mouth just to give them a little wash! She also takes pleasure to smother his face again with her smelly bare feet and makes him lick the sweaty bottom of her soles! She also takes care to make him suck and lick all that dirt in between each of her toes! This was a sick mothafucking challenge folks! This clip is highly recommended! Download it now! Avery Rules!

This can happen to your balls if you dont fulfill your duties *laugh* mhhhh..... Your Mistress in sexy high heels crushing that poor egg. Open your mouth slave and lick it all off! 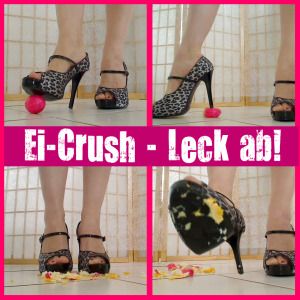