Andrew has applied as a video specialist to a dominant senorita. In the office, the inevitable begins. The seniorita dominates him as her slave. Andrew must first lick her stockinged feet and serve her as a footstool. Then he is spanked with a paddle. Because that's what the spanish madame likes!

A few months ago I met a girl at a bar and brought her home to smother me. It was her first time sitting on someone's face and she power tripped while submitting me beneath her bottom. She kept going even after my body started convulsing from a lack of oxygen. Lots of Hair pulling, some bouncing, and intense smothering! Captured from a Voyeuristic angle that puts you 'peeking under the table' right in the room with us as it happens!This is the first time 'camera 2' has been released. Extra scene after end credits. 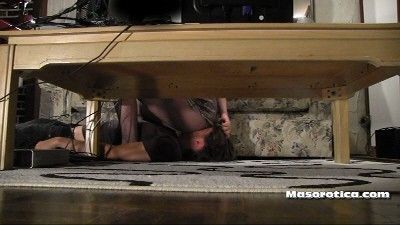 humiliation object joschi must again be one of the two young Torture Dungeon Gypsy Princess Diavolo and Sanella endure. Lying on the floor view, he must be without the divine ladies allowed to serve as a spittoon and ashtray. Under constant verbal humiliation worst and roughest Goss expressions, the two spit in disgust at him. In between, they use his head and mouth as an ashtray..

Redhead Mistress removes her sport sneakers and she wants you now to sniff and lick her sweaty, moist sport socks. She wants to rub her both socks on your face and all you have to do is TO SMELL and to LICK!!! Finally she will remove her stinky socks for you and let you worship and adore her bare soles.. Perfekt Foot Slave Training!

Lea pulls out herself her red, open High Heels slowly; Your feet still play a little with the shoes; She strokes her feet in stockings, cuts over the brown nylons, this randy feeling on the skin; Then she puts the feet on the glass table and further strokes herself at feet and legs; One (n) has the feeling the foot is directly in front of his face; What a sight.

Bizarrlady Jessica beats her slaves Trotti the ass with different instruments red.At first the divine one ties up empress Trotti at hands and feet with chains and handcuffs. So it must kneel in front of her and she gives him the order to count at every blow and to thank her. And Lady Jessica starts withÂ the cane. The first blow on Trottis and it starts to count naked ass: "1... thank you mistress!" . . " . and it goes on so. The Spanking.Queen beats it after that with the sneak.

Freddy is also forced by Bizarr Lady Jessica after a TV education to serve her as a patient. He must let everything go out without opposition by needles to teacher's desks about himself.

Slip-Teenie tease in front of cam in different panties! She try the panties, some in white and with special patterns. She shakes her sexy ass in the panties and poses for you.

You are a non smoker ?! ha, that naughty teen brat smokes in your room-in your bed! Smoking Queen Sally takes little care if the smoke bothers you. She continues to smoke in your room

Mistress Lydia maltreated their slaves Joseph. First, he must be beaten to bottom with the flat of his hand on the deck from above. Then tortures him the cruel young sadist with a fork. She brings out the kitchen a fork and stabs it to him to their hearts content all over his flesh, the slave only as Josef screams. Then they harassed him and me hot candle wax and hot ashes. The merciless young sado-queen lights a cigarette and tortures the Rough Josef Not so. She smokes him in the face and dampens the hot embers on his body. At the feet and other places she tortures him with hot ash from her cigarette. To this end, he is humiliated by it all the time in the national language verbally. In the end he is kicked into the corner of her.

Haussklave Joschi must cook a meal under the strict supervision of the divine empress Jessica for it. While it is cooking in a short Short with house slippers at the stove it leans besides that and watches it in everyone in amusement. And while it is stirring the soup, it harasses for it with different kitchen objects. It hits the ass from and a rolling pin slides for it into the ass strongly with a cooking spoon. Everything must put up with Joschi and not forget on the success of the meal. It costs the spoon for this presented as the divine empress finally, before it still may cost on this she spits. And it goes on so. All the time will cook Joschi about verbally degrades, irritated and finished with rebukes, during this of her.

Slave Joschi must pay homage to each stage having his mistress with her divine boots entered before. Goddess Gloria progressing up the stairs, dragging with Joschi. Each stage of the Goddess Gloria has entered, he must treat her with kisses and praise. He must also be operatic still sing praises of his divine mistress.

This great nylons has bought me a slave .. with them I fuck you in this video your little pig brain!Your penis will be hard when you see me you little cunt! Your money is mine.

Bizarr Lady Jessica gets his meal slave bobby of his mistress served: Of course as always on her feet. Toast and cheese stand on the foot menu today. Bobby eats the toast of her feet, licks the cheese parts between her toes out. EmentalerkÃ¤se on foot cheese! It finally still must eat the remaininging bits of the ground.

Melady crusht with its naked feet of a kiwi, grapes and chips; It delightfully presses the juice with its toes out of every single grape; It presses the kiwi flat flat with its bale; The chips then arrive and of course the whole mess is blurred properly on the ground.

Wants Joschi got nothing to eat for days and noticed how his mistress Princess Diavolo their remains disposed of from the previous day in the toilet. Immediately, he crawls over to her and begs to be allowed to eat the remains of at least. The arrogant young dark Princess eats with relish before his eyes a bit and then has mercy on him. Joschi may eat: the remains of shellfish from the toilet. Siw throws the pieces of pizza in the shell and commands it Joschi eat. It expresses the cruel sadist nor his head with her shoe deep into the toilet shell. She spits a few times as a seasoning it and finally she realizes that she needs to pee. Since Joschi is ever just because that just increases gipsy mistress about him and pees on his head in the toilet-shell. Then have dirty mouth Joschi must also eat at their command, of course, also continue, the pizza with the piss out of the toilet-shell. Flushes to complete his satanic young lady still with the toilet flushing the head.