Lady B prepare fine chocolate for her stupid slave. She trample and crush they in many small pieces under old dirty Sneakers. She spit on it again and again. She send him the crushed pieces and the Boots. He must lick the Sneakers clean and eat the pieces of chocolate.

This is old video with Alex. Sveta tramples Alex with her black high-heeled stripper shoes. She love to cause pain to her slave. So she tries to make this trampling as painfull as she can. Sveta is not very heavy but her cruel heels are very sharp. She pushes them deep into the slave's chest and belly to hear his scream. Sveta also stand only on one foot and kicks Alex to make his scream non-stop.

The sun is shining and i want to trample Pete after we went shopping in a summer dress and ballerina pumps. But barefoot is fun too...In this part i am wearing my ballerina pumps.

When I walk up to the couch, I see this little guy sitting there - extending his hand to me. But if you give offer me your hand - I'm not only taking your hand - I'm not only taking your arm - I'm going to take your whole body! I put him on the ground and immediately start to trample him under my converse sneakers. His tiny body cracks under my full weight and I want to test out how much he can handle. Oops, did I break off your arm? Oh, and your other arm as well ... well, I guess thatâs what's happening when a woman 10 times your size tramples you! And there go his legs as well ... might as well finish him now by ripping his head off and crushing his chest!

Lady B tortures a sweetTeddy. She press his head into a cup Jogurt and smeary all the jogurt on him. She stomp and crush it hard under her Buffalo Boots and cleaning the floor and her Boots with him.

My Tits are so beautyful and big.No matter from what angel you look at them you will always see pure perfection. Today i will let my good boys only worship my pretty tits in my Calvin Klein Sport Bra. I want you to go down on your knees now slave and worship my tittys while i tease you. I will make you go crazy after me and i dont even need to humiliate you. No just sensual Tit Worship Session is enough to tease you into submission.

Sometimes Trina is a naughty girl. She is afraid of pain and humiliation and her Mistress knows this perfectly, so she wants to humiliate Trina in such a way that will make her sit on her knees and hold her Mistress's leg on her shoulder. Trina sometimes smiles at her Mistress, because she loves her, but for this she gets punched in the face. Berty draws nearer the face of the rainbow and huge drooling just fly out onto the slave's face, which makes her even more humiliating.

While this loser is doing the dishes, I sit on the kitchen countertop and watch him closely. Then I order him to get a drink for me. When he's mostly done with the dishes I notice the soles of my high heels are really dirty - messy from all the street dirt - and maybe from the last dancing night in the club as well. I order him to sit down in front of me and clean the dirty soles of my shoes with his tongue. Meanwhile I get to relax, enjoy my drink and watch his disgusted face as he tastes the dirt from my shoe soles! Of course, he also has to clean the shoes all around after the soles are cleaned!

The slave loves saliva of his Mistresses. The man begs them to spot over his face. Bertie and Julie sat down on the bed and agreed. The girls have saved up a lot of saliva in their mouths and prepared it specially for the slave. The girls push out magic saliva on the slave. The slave swims in saliva and he is happy, he smiles and smells it. He strokes his face and enjoys the saliva of young girls.

I took some longies with holes or torn off parts and repaired them. Also I tied with threads whistle turbines or pipes to them and to couple of tough Gemars. And you know what? Rubber is stronger than threads. Girls failed to B2P them almost completely.

117620 - Crushing his throat under riding boots

I trample the slave under my sexy - but very painful - full leather riding boots. But today I've planned something a little bit different - a little bit more brutal :-D I want to trample the loser's throat under the hard soles of by boots! I push his head down with the boot and then shift my whole weight on his throat. I also walk over his throat a couple of times - but this loser can't keep his head on the floor like I ordered him to! So I will stand on his throat even longer! Sometimes I also stand on his throat with on boot while the other boot stands on his face - and of course I still trample his chest in between as well - I don't want him to get any rest in between!

Crystal is the kind of girl who loves to humiliate this loser slave and makes fun at him all the time, so the timing was just perfect to do it after another long workout session at the gym! She has been exercising for two hours with her sneakers on, and it seems like she forgot to put some socks on in her feet this morning! She makes this loser slave comes in the room, and makes him bow down on his knees to obey her instructions! She makes him take her sneakers off, and just covers his face with her sweaty naked feet! The smell was so intense, that was totally sick! She takes pleasure to rub her sweaty naked feet all over his face, and makes him take some deep breaths in her feet! Crystal also makes him stick his tongue out, to lick and clean the sweaty bottom of her soles! She wants him to lick all that sweat at the bottom of her feet! Crystal also wants him to take some very deep breaths inside her sneakers! Donât you love that smell of my sweaty feet? Welcome back Crystal!

I'm relaxing in the living room and checking my facebook when I decide to have a different kind of fun - with the fruit basket on the table. I want to crush all the fruits under my bare feet. There are bananas, grapefruits, apples and plums in there - and they're all getting flattened by my feet! One piece after another burst under the pressure of my foot soles!

What is your most sensitive body, slave ?! Everything you are thinking is unfortunately wrong. It's not your little eggs. It's not your cock either. No, it's not the glans either. There is something about you that is much more sensitive. You can not get it anyway, because only these lines turn on you again and you can not think clearly anymore. Yes, and there we are already at the object of desire. Your most sensitive part is and remains your mini brain. Yes - the little thing in your pear is extremely sensitive to my horny voice. It does not even matter WHAT I say. It's just important that I say something. I could also talk about cow shit and you would not be able to control yourself anymore because your brain just needs the sound of my voice to become docile. Put on your headphones for this awesome ASMR video! It's way too good for you, but I love it when you're totally docile waiting for my next deluxe video.

Play Video Take a deep breath and let it out slowly.. you are feeling teansion gather as your breathe in....and release as you breathe out.you wil want to continue to breath deeply feeling yourself relax more and more and feeling pleasure fill your body and mind..Listen carefully to the sound of my voice and surrencer......... you will become My eternal slave after you will watch this clip! I will wash your brain, manipulate your weak mind, drain your complete! your mind, your sould, your cock, your stamina, your entire life belong to Me! ***

4 girls - torment and pleasure! 4 girls - my new record! They raped me with a mob! At first the girls in turn told what they ate yesterday and said they wanted to shit and showed their asses in panties. Then we went to the studio and the girls took turns using me! I felt the taste of the shit of the new girl Lisa - and now I know for sure that every girl has her own unique, individual taste! Liza's shit was not sweet, not sour, not bitter - I almost did not feel his taste. All girls have a unique taste and it is very addictive - the desire to experience a new taste! This time I decided not to tie my eyes to enjoy the look of their beautiful asses and look like shit.---This is the best way to spend time with girls! They fart and stink - but for me they are the most delicious! It was scary, but the desire to feel their tastes and the fact that now I will be used by 4 girls was stronger. I did not know what they prepared for me - but I knew that I would eat all their delicacies - it's my duty!

For Misia The Witch, itâs time to put order into the shoe rack and get rid of useless shoes. In the back, behind the shoe rack, there is a compartment where she finds five pairs of shoes that one of her silliest slaves had stolen from his wife in the hope of making a welcome gift. Unfortunately, the fucking idiot didnât realise that Misia's feet are smaller than his wifeâs ones (at least, two sizes different) and there are no tricks to make those too-big shoes comfortable to wear for our unlucky dominant lady. In this video Misia tries on all pair of shoes again to test if some of them can be used as instruments of body torture in her hard trampling sessions. Obviously, she chooses a fakir for this cruel experiment, âcause she knows well his friend can bear any type of shoes and heels on his belly. At the end of ten exhausting minutes of high heels trampling with different shoes, Misia - a little nervous and suffering from sore feet in the wrong shoes - vents her rage for the silly gift, using fakirâs stomach as a human trampoline for twenty powerful and high jumps. 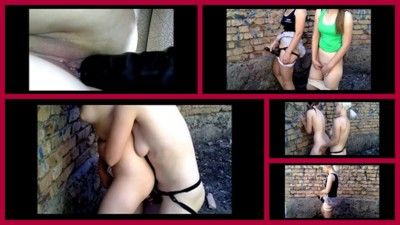