Imagine this little innocent dog is YOU! Goddess Vanny is going to show you what will happen to you and prepares the cuddly toy for you to watch. With her g-string ass she sits down firmly on the little body and crushes it brutally beneath her. Her ass squeezes YOU flat! Look at how awesome it is when goddess Vanny sits firmly on you with her sexy g-string ass. The cuddly toy has no chance against Goddess Vanny and is squashed flat by her ass. Next time she will crush you, little loser, with her ass! YOU are her next victim! 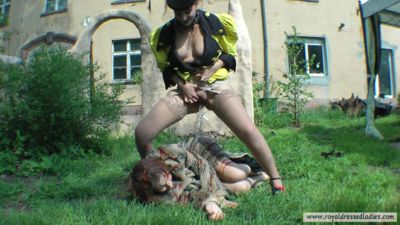 Last but not least my boot licker was allowed to enjoy and live up to its name. Since I'm not a monster, my slave should not lack of nurishment .. hahaFirst, he may eat the crushed chocolate biscuits from the floor and then lick my boots clean to its best with his slave tongue. Since he needs way too much time for my circumstances, he will be allowed to taste my heals to feel properly.

Down,LOSER and eat from my feet! It's a such big privilege for you to eat from Goddess' feet!You crave to be my private pet and it's what you deserve flithy PET!

This episode was left because girls werenÂt good for non-automated action. Taller one overinflated red though it took her significant time. It wasnÂt easy for them even to hug pop it.

Crawling back and forth it means for the slave, sometimes to Miss Bella and sometimes to Miss Lyla, the beautiful thing is for both ladies that they can miss him really hard slaps. So 20-30 of Miss Bella, then 30-50 of Miss Lyla and that again and again. Are you good at counting? Then count yourself. So have fun with these two sadistic girls.

Miss Lyla orders her slave to lie on her stomach in front of her. When he lies in front of her, she tramples on his back. If the slave now thinks to alleviate his suffering by groaning he is of course completely wrong with Miss Lyla, because Miss Lyla enjoys her dominance coupled with her sadism.

Recently I was able to put one of My slaves in a fun new toy - a facesitting bench! Helplessly strapped in, with his face perfectly positioned to be My seat, he has no choice but to lie there and take it as I sit down and relax after a long day! A good slave is there to make his Goddess's life easier - what an honor it is for him to be able to serve Me in this way!

My new Bootlicker may prove directly his quality. He has to clean my boots with his slave tongue and of course the heals must be properly cleaned with his filthy slave jaw.Since the clip is not of best quality, but I still want to present it, it is available at a bargain price!

It will be a special honor for the slave girl today - she'll worship by sexy boots by kissing and licking them! She has to start at the tip of the boot and then kiss them all over until she reaches the top. And then I order her to lick the boots - first the tops, then the soles! But I'm not satisfied with her enthusiasm - maybe we should try something that she's a little more used to?! She'll blow the long thin heels of my boots next! This is a non-exclusive custom clip for a fan. If you want me to do a custom clip for you, send me an email to marissa@madamemarissa.com!

Chastity and I look absolutely yummy in our cute metallic Christmas bikinis! We move our thin, sexy bodies in your face, urging you to stroke your cock. I hope you have a candy cane handy, pet! You're in for a tasty holiday treat with Princess Chastity and Princess Ellie.

ENGLISH SPEAKINGCUSTOM REQUEST - You come back from a business meeting. You are sitting down to rest, drinking coffee or smoking and checking a mobile phone with your beautiful legs crossed over. You are very tired and a little nervous. Suddenly a man arrives and tells you he is looking for Mistress Gaia. You reply to him it's me and he tells you that he is a bodyguard and: If you want to protect your place, I can keep you safe 7/24 Mistress Gaia. She looks at him and says: You are joke you fucking little weak bitch (she speaks to him abruptly because she is very tired and nervous after the work meeting). Then she gets up, goes over to him and tells him that she could easily beat him up. He is amazed by her height, and says Mistress please give me the most humbling lesson of my life. First she tells him that if he manages to get there and kiss her armpits she will give him the job. He tries desperately, but still can't reach your armpits. You give him some incentive with some slapping, and spitting in his face. However, He is very sorry because he can't reach your armpits because he desperately needs that job. You are aware of his despair and begin to provoke him even more. Finally, sitting back down with your legs crossed, you order him to kiss your beautiful feet and tell him to apoligise for bothering you. He obediently kisses your feet as he apologizes. He then begins to beg you to be your slave. But you reply that instead he will become your little pet, and be locked in a in a cage until you need him...

While in his prison cell, this man receives a visit from the new female police officer! She makes her way inside and then suddenly strips him of his clothes! When he is rendered completely naked, she throws him on the floor, ties his hands together, and then pins him down by grabbing his neck! Shortly after, without warning, she starts defecating on his mouth! The man closes his lips tightly to prevent any of her filth to get inside, but by the time she is done relieving herself, she orders him to devour her mound of feces! At first, he continues resisting, but it doesnÂt take long before he understands that there is no getting out of this and finally decides to succumb to her authority! He starts chowing down on one chunk after another until there is nothing left on his mouth, but some fell on the ground during the process, so he is then made to clean up the mess he has made using only his lips and tongue! However, it doesnÂt end there! Apparently, the sweetheart did this because of her fetish for poop, and now that she is aroused, she reaches for his dick and gives him a handjob until he cums against his will!

ITALIAN SPEAKINGCUSTOM REQUEST - slave used as a dustbin. The slave is lying on his back, and mistress is sitting on his stomach with her feet completely over the slave's face and using his legs like a backrest as she relaxes on the phone. You light up and smoke a cigar, and use your slave as an ashtray. Then you make a phone call telling your friend that he serves as human furniture in your home. Once the cigar is finished, you stubb it out on the tongue of your object. Then you decide to give yourself a pedicure. As you cut your nails into the mouth of your human trash, also using a file and do the same. You notice that there is excess skin, and you use a little contraption to remove the dead skin. Once you have cleaned both feet, you empty everything into your slaves mouth, while completely ignoring him. At this point you have a drink of coffee while smoking another cigarette. You finish off by cleaning your ears with cotton buds. Then you throw everything into the mouth of your human dustbin watching him gargle and choke, before finally using him as your toilet...

How nice I can be... For his birthday my slave gets a few pieces of delicious muddy cake as a present from me. He is so happy about it... but then he quickly understands what that means for him. Of course he is not allowed to eat and enjoy the cake just like that. NO! He has to eat this mud cake from my feet! I take off my heels and press my stinking nylon foot into the middle of the cake. I crush it and make it the best cheesecake he has ever seen! Open wide, slave! Now there is aromatic birthday cheese cake! Yummy!

Tomorrow, three slaves will end under my feet; they will have so much to suffer. Today I will not do anything but to anticipate what I will do tomorrow; these three dolls will be a small example of what will follow.

Miss Mistress Livia fucks her slaves face again and want him to sniff and smell her pussy and ass. She rides his lucky face and rubs puss and asshole on his mouth and nose. She love to feel him sniffing her pussy and her ass. She moans and loves the feeling of sitting on a slaves face