I play a bit with my heelslave. His eyes blindfolded he gives in to my painful treatment. I get to use my riding crop, clamps, my long nails and even my heels.

First shift in Candy's infirmary and first patient. Bambina is a pervert girl who is in love in two doctors Nicolina and Joss. She invents the illnesses to come close to them. Pretty doctors do their job and heal her sicknesses. Something is stucked in Bambina's throat. Pretty doctors try to take out it from her with their bare feet and choking of her throat.

My stockinged feet can twitch your butt, am I right? Go close to your monitor and enjoy the sights, Piggy

As the title clearly reflects: IT'S ABOUT YOUR COCK! Cock is almost excessive. Cocky would be in your case, the better expression! But I'll explain more in this video. And if you look brave to the end, you may even experience some trampling. So little-penis-slave -> watch it! 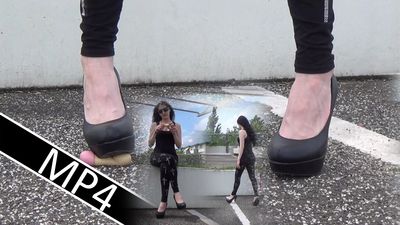 I cut the banana in two pieces and put then into my platform sandals.Then i slowly put my feet into the sandals and banana becomes smashed into a puree.Sweet and delicious.Specially from my soles and shoes.Would you try it?

Come on - look at my new high heels. You like them, don't you? They are completely new, shining and clean. And you will polish them with your tongue and your face so that they stay that way. These high heels will stay clean forever, and it is your task to take care of it. The moment you see them even a little bit dirty you will take care of it and lick them clean. Again and again - this is your new task, high heel slave!

Lady B crushes many expensive masks with her sweet Sneakers. The masks are made of porcelain and makes a good crush sound under her soles.

Alena cuts an incredibly sexy figure in her new jeans which she is showing off to you in her bathroom! She climbs into the bathtub, knowing exactly what she's up to! She quickly turns on the water, impatient to fell the water run down her jeans legs, making her jeans wet all over! Alena loves the sticky jeans feeling of the denim on her bare skin! Now the tight jeans are a perfect fit!

Nova tries out her shrinking device from school on you (her boyfriend) but you're only supposed to shrink to doll size... and you keep shrinking even smaller after that. She wanted to feel you inside her mouth with you at that size but decides to proceed anyway. Once she puts you in her mouth, you still continue to shrink, smaller and smaller. But when she goes to get you out... she can't find you. Oh... uh oh! Hmm, she'll just not worry about it and talk to the science teacher tomorrow.

Come over here - I'll show you my hot ass now. What do you think? Does my hot ass turn you on? But, I've to tell you what your problem is. The problem is your tiny little dick. What is a woman, with such a hot ass, supposed to do with such a small dick? That wouldn't work at all - I bet I wouldn't even feel it! I only get turned on by big dicks!

Zara doesn't put up with bad slave behavior! She's naturally dominant and lives that out to the fullest. Her slave has to stay on the ground - under her ass! She also whips him in between!

Katharina wants to do a little battle with her slave to extend her workout routine. She tells the slave to attack her - but he obviously has no chance. Immediately Katharina has him in a strong hold so he has to surrender. Now that it's obvious who won the fight Katharina wants to celebrate it - by sitting on the loser's face. That's how the play goes for losers - they got to serve as seating cushions and ass smellers!

You know the only thing I want from you, right? Yeah - your cash - and nothing more. So give your purse to me and let me take a look. Good for you you brought at least some cash. Well, it's mine now - but you can keep the change - crawl on the floor and pick up the cents, pay pig! 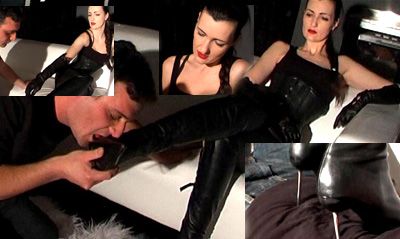