Mistress Lea and Mistress Kitty force a slave to lick clean their dirty shoes and feet, the gag their feet and shoes in the mouth of the slave and slap and stomp him hardly in the face.This twoo Mistress are realy cruel.

Again is a Laptop victim for Christins High-Heel Boots. First she scatched the Body with her sharp metalHeel. She walk simply over it and begins to crush the Keyboard. After she srcatched the Display and trample very hard in it and makes deep holes . At last she stomp the Notebook very hard and destroy it under her sexy Boots.

Sweet Luna is angry ... her teacher did give her a bad grade and now he has to face the consequences. Luna is kicking him down, sits on his chest and dominates him in order to get a better grade. Great victory and dominant poses in here!

Holy Fuck! Let me Introduce you this 18 y.o. Brat Chix Isabella! I just don't know what to say here...Isabella's like a Sweet Angel and a Devil at the same time! She teaches her Foot Slut how to serve and talks about her Cruel Intentions! She makes him Lick all the dirt at the bottom of her boots as a Mean Princess before she takes them off and force him to sniff and take some deep breathe into her sweaty socks!

Damn! This girl is so fuckin' hot! Mathilda knows how bad you freak about her feet for now so she just takes adantage of it! She wants your credit card number in trade of her sweaty feet all over your face! Are you ready? She teases you with her filthy pumas before she takes them off to cover your nose with her sweaty socks! Don't be shy! Take a deep breathe in my smelly socks! They were sweating all day long in my shoes! Mathilda also takes them off to give you the chance and the honor to sniff her smelly barefeet size seven! Don't you wish I rub them all over your face? Stick your tongue out and lick my feet! You are my slave for now!

Damn! Here is another hot clip with Christy where she wants to use you as her personal footslave! She wants you to bow down on your knees and stick out your tongue to lick and clean the bottom of her shoes! She will instruct you how to do it right so make sure you're doing a good job at the filthy bottom! Christy also takes her shoes off to smother your face with her stinky feet! She wants you to smell them after a long day with her shoes on! She also instruct you how to lick the bottom of her sweaty soles with your tongue! Open your mouth and suck all the dirt between each of her toes!

Damn! Here's probably one of our best clip ever in POV Mode! It's spring over here so Jessica walks all over the city with her boots and there's a lots of dirty garbage all around! She walks through them to join you and bring you in a secret spot where you'll have to obey her commands! Jessica makes you bow down on your knees in the backyard and wants you to lick and shine those boots! Use your tongue to get good results! Does it taste good?

I just LOVE teasing your cock with my SEXY tight pants... My SEXY black stilettos & my pretty bubble gum toes... Nobody can tease your cock quite the way I can... Hope you took your vitamins today... Your in for one strong orgasm!... he he... enjoy :)

The SadoSisters are finally back - with a bang! Of course they'll use you like any other pathetic male slave. You'll start serving them by licking their disgusting dirty boots clean while they verbally humiliate you. And you better do a good job or they'll use their riding crops to make you do it right! Layla's boots are really nasty and the soles and heels are covered with mud - but of course you'll lick them clean anyway, right?

Part two. This is a wedding fashion show. Like all fashion shows, the cameraman concentrated on the legs and shoes of the women there. In this film, you can see what kinds of shoes the brides wear underneath their long gowns. ---> In all the films the music is the same because the women were on the runway several times. Of course, the shots are different in each part. <--- 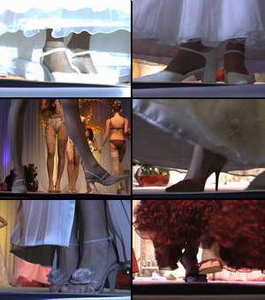 Holy Fuck! Cassandra hits another level of humiliation with this clip! That was a long and crazy night downtown so she was really in a mood to abuse her slave! She makes him lick and clean the bottom of her shoes with his tongue after dancing all night long! Make sure you lick all the dirt stupid! She also takes her shoes off to give him a taste of her sweaty feet! She makes him lick the inside of her shoes with his filthy tongue! Cassandra also smother his face with her sweaty feet to just to show him how stinky they are! What a Bad Girl! She also forces him to lick and clean all the dirt at the bottom of her soles! She makes him suck her toes in a doggy style position to make sure her dirty feet are now perfectly cleaned! Cassandra's at her best!

Vanessa wants you to be Very Careful in this Video where she trains you how to be devoted to her! She wants you to take a Deep Breathe in her Sneakers right after she comes back from the Gym! She wants you to know how she trains hard! Can you smell it? She rubs her Stinky Socks All Over Your Face to make sure you understand who's in Charge! Vanessa wants to know if you're Really Devoted so she commands you to bow down on your knees to sniff her Amazing Bare Feet Size Seven! She wants you to Lick and Clean All That Sweat at the Bottom! She even Spits on her soles a couple of times then order you to lick that Spit on her Sweaty Feet!

Angelina knows exactly how easy she can wrap a man round her finger - and some men even adore her hands. You're one of these men, right? Watch her playing with her hands, sticking her hands and fingers out into your direction and measuring her hands' size.

Samantha also heard about our brand new studio so she wanted to take advantage of that and make this loser bow down on his knees to lick and shine her dirty boots! She wants them cleaned for a photo shoot so she makes this loser work really hard with his tongue! She also makes him suck on her high heels and take a look at the bottom to check out his work!

It seems like Samantha was not really happy with his job on her boots so she takes them off to punish this freak with her sweaty nyloned feet! She makes him sniff on them after a long day at the office in her boots! How does my feet smell now loser? Will you clean my boots right next time? She makes him lick her pantyhosed toes and laugh about his tongue on her sweat! Maybe they taste better then my boots?

Walter told Nadine during their last shoot he didn't think it was a good idea if she trampled him in heels since she's 6ft tall and weighs quite a bit. He shouldn't have said anything because she kept bugging him until he eventually caved, just like his ribs are about to. 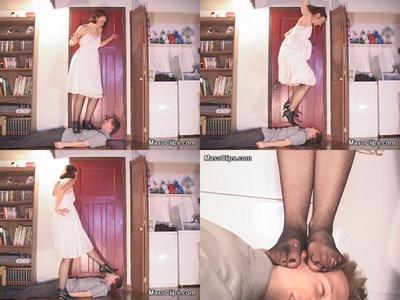 Layla and Jane always think of new ways to torture their slaves. Today they ordered two of their loyal slaves to lie down under this huge couch and then just sit down on top of it - completely ignoring and crushing their slaves underneath. They even jump on the couch and verbally humiliate this poor guys in the meantime.

Damn! It seems like Mika also needs attention on her feet especially after a long day with her shoes on! She makes this loser lie down on the floor to serve as a foot stool! She knows about his addiction to smelly feet so why not take advantage? She asks him to take her shoes off to cover his face with sweaty black socks! Mika just relaxes on the couch and watch the movie while this loser is breathing with her stinky socks on his nose! They were so warm and wet of sweat! Mika also orders to take her socks off to rest her stinky soles on his face! She also makes him lick her bare feet to refresh the bottom with his tongue! It seems like she really enjoy to take advantage of this loser!