The slave expected an easy-to-handle session when Natalie told him that she never trampled a man before - but man, was he wrong! She steps on his chest and digs the heels of her boots into his chest without having second thoughts. To make it even worse she keeps standing on only one foot to concentrate the pressure on one of her heels. When she takes her boots off after some time she reveals a pair of stinky socks which she of course doesn't miss out to trample him with. She makes him sniff the socks before she steps on his head with both feet. After taking her socks off she proceeds to trample him right away and grabs his nose between her toes to make him sniff them too! She stands on his head and jumps on him a few more times before she decides to end his punishment - well, for the day at least!

Teodora and Drew try to find the reason why to destroy this fat guy. No reason, they just love it. For the whole nation, he is a doo-gooder but for the girls he is a looser who should be punished. They trample his fat belly.

Ilaria is a model with size 8,5 feet and a real mania for heavy-duty boots. She has, however, only a pair of boots and she wears them practically always, in summer and winter. Mister Apnea (clever as a fox) knows well that if you put your feet in the same pair of heavy-duty boots for months, those feet become chemicals. Hence the unhealthy idea of going to Ilaria's house with a fetishist friend to test with nose the destructive potential of her feet. Ilaria takes off the heavy-boots and shows a pair of green socks amply deserving a visit of the inspectors of the office of hygiene (her socks were not "dirty", but "stinky" in a letal way). The better moment, however, is when the young girl slams her left bare foot against the nose of Mr. Apnea and the right under the nostrils of his friend. For those who love the smell of boots and feet... this is your clip! 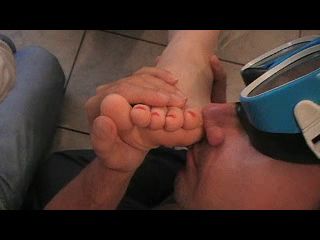 Yes, "just crap" after I busted the fat pile with the Zewa, you hold it pretty close to the camera. Then I flap up the toilet seat, let the pile plop into the toilet and flush the toilet press. Watch as he erschwindet and I have to rid all with the brush ... 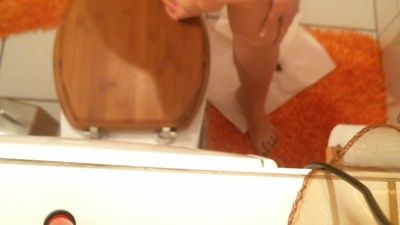 Stella is watching TV and wears her sexy mule high heels. Her slave is lying under her feet. She uses her slave as a footstool. Her slave must open his mouth, so Stella puts her heels into his mouth. Stella has crossed her legs and she is dangling with her other feet and is playing with her mule while all the time she is her other shoe in his mouth. Great POV scenes and fantastic dangling scenes, too.

WARNING ! WARNING ! WARNING ! Don`t buy this clip if you don`t want to end up as a completely mindless puppet ! In this clip, various techniques are used which have a mind-altering effect and will burn themself deeply and indelibly into your slave skull. Like a mental tattoo that burns my will into your brain it will be nearly impossible for you to delete it again. You have been warned and even if you little idiots seem to be magically attracted from any kind of warning, you should be careful in this case. Everything that happens after the purchase of this clip will happen on your own risk. Dare you to be my slave forever ?

Katelyn just got back from her friend Circe's house and now wants to transform you into a pig! Katelyn and Circe have been friends for ages and what Katelyn really loves how she's into witchcraft and spells. Lately she's been transforming men into pigs and Katelyn found it so amusing that Circe taught her the spell!Katelyn first makes you grow tusks and pushes your nose up into a snout. She then shrinks you and fattens you up! She laughs at all your hard work at the gym disappear. Floppy pink ears then pop out of your head as your skin turns to pink. She then wings her finger around and makes a long curly tail pop out behind you. She laughs at how adorable it is!She tells you how you better be a good pig or she'll turn you into bacon. Your feet then turn into trotters. She tells you all she hears out of you are pig noises. What are you trying to say, she asks? If you want to be turned back into a human that's certainly not going to happen because Katelyn was only taught how to transform people into pigs - she wasn't taught how to transform a pig back into a man!Katelyn then makes you even more pudgy and picks on you a little bit. She tells you to enjoy your new form or she'll gut you and make bacon and hot dogs out of you! She then makes your tail pointy at the end and tells you to run up into the pigsty or she'll have bacon out of you!

Let's be realistic ... genuine you are sitting in front of your PC again ... waiting for the the annoying bitch-wife home finally bugger that you can indulge your weighting engines : D. you sit tense there, buy my video, are blown away !! The annoying, ugly bitch-wife is forgotten, I have your complete attention !! you must jerk, nasty stuff .... !! But you'll pay for it, pussy !! And take good care that is not equal to ALL of you will notice the bustle bitchy wife ; D !! Use your nasty marriage in jeopardy: D .... Cash ♥ Queen

We return with more of Kayleigh and Lexi. Man I love watching these two being tickled. Kayleigh's ticklish EVERYWHERE! Her soft voice and screams for mercy go unheeded. Her ultra ticklish feet kicking and toes spreading and curling is pure delight for both tickle fans and foot lovers... I always love how Onika verbally torments her victims during the session. She pays special toe tickling attention, and I zoom in for the fun. Lexi, for being new is a good tickler. But her time is about to come. When the roles are reversed, and she it tied up it's Kayleigh's turn for revenge. Lexi is also very very ticklish. So this is a delight... Ticklish everywhere I might add. Her screams are hilarious and even I have a had time not laughing. She is kicking and squirming as they tickle her from curling and spreading toes, to neck. I love when the girls focus on her feet she screams out, Oh no not my feet! and then more laughter ensues. I can't wait to get more of these two back for some more tickling sets. It's hilarious from beginning to end. MUAH! 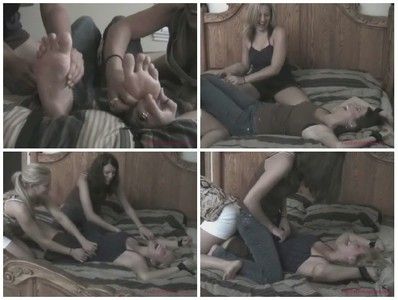 So I was walking around the park with my big pro-grade camera while waiting for one of our girls to arrive at the metro, when this Polish woman approached me asking what it was for. I told her I enjoyed filming myself getting stepped on, bullied, or sat on by girls. She couldn't stop laughing after seeing I wasn't joking lol. I then asked her how she'd like to make $100 just to sit on me and insult me in Polish, because I told her I never had a Polish woman on my site before and I thought it would be different. I had time to k1ll while waiting for my next shoot, so figured why not. She quickly agreed so we found a quiet spot at the park. I flipped on my camera, and she wasted no time sitting on me while verbally insulting me constantly in Polish! I didn't understand much of what she said, but being insulted in another language was pretty hot!There were other people in the park with us that day like on any hot/sunny day, but they were far enough in the distance that they probably just though the woman was sitting on a blanket lol. The clip contains a lot of stomach/chest sitting, head/face sitting, public humiliation, and tons of verbal humiliation! 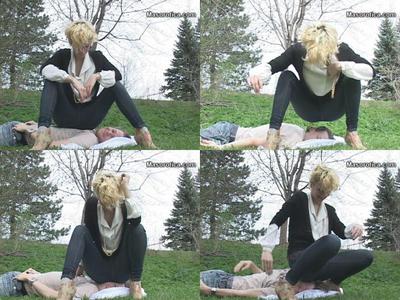 If there's such a thing as a natural born dangler, I am one. It's second nature to me, not sure if to air my hot feet, to take pressure off my toes or possibly an innate male attraction move. The truth is, it becomes so easy to spot footboys sweaty with excitement, most trying to hide their obsession with my CLASSY FEET and SHOES dangling furiously. The ocasional shoe drop is the cherry on top...

The day 4 it is very hot in the morning. I need to use the toilet firstly. The toilet has spent the whole night outside. So his breakfast is already backed up, hahahaSuch a great big pile. Now eat it slave.

You ... you're thinking seriously, as a woman I could come up with such a loser leave as you ?! A real man you want to be ?! Hahaa: D !! Of course ... you're a pussy joke, a poor imitation of man !! No woman takes you seriously and something like me, you have only your hottest dreams! The reality is against you !! I fight hard with myself, not to laugh the whole time about you loser !! if you are from reality ... I'll get you back on the floor of the facts !!! Have fun watching !! : D Cash ♥ Lady Queen Tammy ♥♥

Lea is in her living room wearing a white bra and a white pair of boy shorts. Pulling her shorts up tight she shows us her nice looking camel toe. Then she pulls her bra to the side and rubs her nipples moaning softly. The camera goes low and shoots upwards as she runs her fingers across her pussy over her panties. With her bra off she flicks her nipples as she grabs her small breasts. Working her hands down low she deftly slides her boy shorts down and off. Now completely naked she lets her hands work her clit over real well. Now sitting down with her legs spread she rubs her small breasts and slides a finger into her tight snug fuckhole. She moans so loud as she cums hard.

Your just pathetic & ur such a fucking LOSER. I'm so HOT.. So WHY would you EVER think that a girl like ME.. Would EVER go for a LOSER like You?.. I Don't do Charity LOSER! Your such a freak.. You drool like a retard & ur cock starts drooling the moment you see me. Your a Pathetic weakling that belongs ONLY at my feet. So What R U Waiting 4 BITCH?? Get down on the floor Now LOSER!

Four feet are better than two. - Melius abundare quam deficere - said the Latins and Mister Apnea is convinced of the truth of this maxim. So, it will be a pleasure for him to have a snack under four stinky feet. Our fetishist hero is eating chocolate biscuits when Anna and Francesca enter the scene. Anna takes off her flats (worn without socks) and orders him to smell inside. Anna's feet have an unbearable odor and her toes are disgustingly sweaty. Francesca has stinky pink socks and macerated feet (stay away from her sneakers, if you value your life!). Mister Apnea is literally bombarded by their smell! Finally Francesca rubs cookies against her toes and soles to give them the right (disgusting) taste. 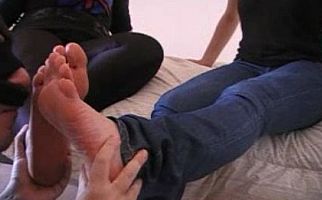