Mistress Kitty catch her slave while he smell and lick several shoes, she then decides to punish him severely and trampling him with each pair of shoes.

You can try convincing yourself that this is just an innocent kink, that everyone has their kinks and that it doesn't make you any less of a man, but deep down you know that that's not true. You know that there is no better feeling than feeling lace panties rub across your sissy clit, and that you'll never be able to truly please a woman because you secretly yearn to be one.

My slave hates the smell of cigarettes and I use this distaste to humiliate him. I sit on the couch and rest my legs on his body when I light up my cigarette before i sit down on his body and blow a huge load of smoke right into his face. But that's pretty normal for him so I decide to take it a bit further. His hand is used as my ashtray and while I'm holding his nose closed with my hand he has to open his mouth and inhale the smoke i'm blowing out of my mouth. He has to keep the smoke in his lungs for a long time before i allow him to exhale it.

Can nuts REALLY be RUPTURED from the Inside Out? I do have to admit that I thought the whole concept was Ridiculous at first - But as time goes on - I am starting to wonder IF it Just MIGHT be Possible! lol.. Now that I Don't EVER Allow this BITCH to Cum Anymore & Still continue to Tease & Deny his cock with my pretty feet DAILY.. The LOSER is in So Much PAIN with blueballs 24/7 & it seems to be hurting WORSE than EVEN a Good Swift kick in the balls from my pointy toe boots.. Well 1 of my other Subs is just OBSESSED with this Concept.. He seems to think that IF I Wear My SEXIEST High Heel Shoes & FLOOR this BITCHs cock like the Gas Pedal of My Car EVERY DAY & Don't EVER Allow him to Release.. That Eventually the Internal Pressure will build up enough to Cause the LOSERs nuts to EXPLODE & BURST from the INSIDE! lol.. I think that would be pretty fucking Hysterical to watch (IF it can happen).. So I've been Pumping it HARD Every Single Day - EVER Since! HA HA.. Today I'm wearing a pair of my Sexiest Open Toe High Heel Mule Sandals & I Really FLOOR the SH*#! out of the BITCHs dick Good & HARD.. Even if they Don't Ever Rupture because of this.. Just the Additional PAIN that I'm Causing alone - is STILL Enough to Make me Smile! he he

Mistress Lea and Mistress Lydie trample hardly a slave in the wood, they jump on him, choke him, stomp his face, crush his balls brutaly, the beat letaraly the shit ou of him without any pity.

2 teenagers in a fantastic session with shitplay, shitmouth, shiteat. Unbelievable sexy attractive girls do things you can even imagine....FULL UNCUT UNEDITED scene! 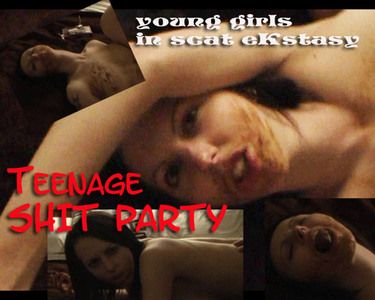 The girls like to enjoy the nice weather and so they go walking with one of their slaves in the woods. Certainly he has to walk like a dog on a leash! On all four legs he has to follow the hot girls through the leaves. As soon as they reach a small pond they tie their dog on a nearby railing and order him to clean the dirty shoes with his tongue! Because of the muddy ground they got very dirty. But that's not enough! He doesn't do a good job and so he has to lay down on the dirty ground. The two girls jump hard on his torso now. To get more swing they hold on to the railing and then jump brutally on his breast!

OK, this is an alternative view of the action in the POOP PIE video, shot up close and personal with an HD camera and uploaded in full HD. If you want to see the shit coming out of my ass so clear you would swear you can smell it, then this is for you! You won't see the kitchen scenes, but you will get a view of the shit and piss as it comes out of me and then a nice close up of me finishing the pie. 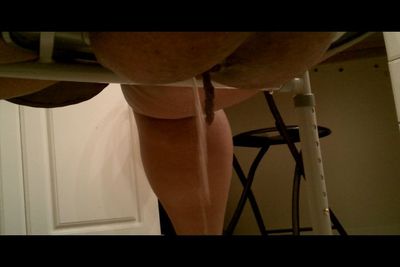 My slave is waiting for me at the door when I come back from a shopping spree - but he has been using his cell phone again although I forbid him to use it! I'm the only person in the world that's important to him - so he won't need a cell phone! As a punishment I trample this loser under my sexy new boots and make him lick and kiss the boots.

Loser - that's the word most suitable for you! And of course losers like you have to be punished and humiliated as much as possible! And do you know how much fun I have doing so...!? :-D You are nothing more like a small, pathetic wimp! Completely useless! Now I will use and abuse you the way I like it! You will have to bear my moods and you will be my dessert! *laughing* You will have to wank your dick while listening my words and my nasty humiliation! And you will have to eat your sperm! It sounds disgusting...? Of course! :-D You will do it - Come on!

The girls want to use their slave as a cushion while doing their daily workout - but he's moaning too much so they decide to put his weak body under the workout bench and take turns sitting and standing on the bench and on his body! Their boots crush his face and body while the fitness bench compresses his stomach - now it's ok for him to moan!

You know how liberating it is to relieve yourself outside? If you haven't tried it, you should! I love it! The feel of the air on my pussy, the thrill of getting caught, the relief of letting that hot, golden stream flow! In this clip I let go outside in four separate scenes including one at night and one on the path in a local park with people having a picnic just about 50 yards away. If only they knew what I was up to! 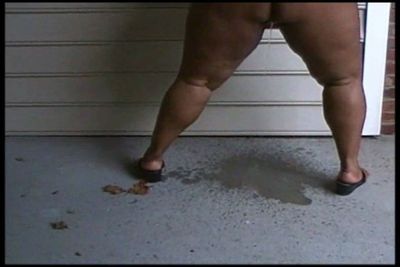 Mistress Lea Punishe her slave severely by strangling and choking him with its feet. She crushes his throat cruelly, gag her ballerinas in his mouth for choking him and strangles him between its legs, she does not leave practically any break has the slave which cannot almost take again its breath with Maitresse Lea strangles him again.

In Part 2 Girls tie the Slave up onthe Stairs and start to poop into him one after another, then they clean his Face with a Mobb afterwards. Part 2 is with Adison. 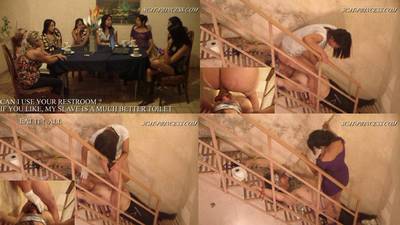 Now that Xana has moved in poor Joe just can't control himself having two super hot girls as roommates. Xana tells Megan that she caught him sniffing her socks & he's in trouble now! These two beautiful goddesses mash his nuts to a pulp! Both girls are wearing some tight sexy workout wear & sneakers. They just came back from their aerobics class & decide to continue working out by kicking & completely crushing his testicles! Megan & Xana start out with some super sexy nut crunching stretches. Both girls take turns using his balls to brace their feet & then lean in to crush them under full weight - crunching his jewels with each stretch! Check out the way Xana kicks him in the nuts over & over again dropping him to the floor! Both goddesses decide to workout their arms & take turns punching him in the balls as hard as they can. They're not done with him yet either! 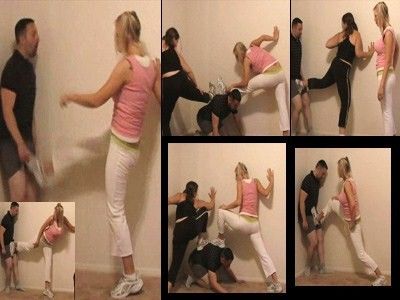 These Ladies sitting on a furniture and her toilet slave is lying behind the furniture of the ladies and is waiting to eat the shit from all the ladies.

Mistress Kitty torture a slave under its high heeled shoes, she trample him, digs a heel brutaly in his stomach and flesh, crush his nipples, strangle him and trample his balls brutally.

I am sitting at my desk smoking my e cigarette farting over and over again. They are so stinky I had to light a match! I should have known where there are stinky farts there is poop very soon after when I fart I feel a wet spot in my spandex pants, I rush to the toilet and explode and spatter a ton of poop into the toilet, I even splatter the seat! I finish off with a long pee and flush, but wait there is a little more, I push the rest out. I feel so relieved after all the farts and big poop !

Cruel Lesbian Bitches Jenna & Krista found a smelly-ass-eating perv who collected enough money to score a session w/the Princesses. he was so turned on by Their perfect, young smelly asses that he kept calling Princess Krista "baby" which pissed Them off bigtime. They made him understand NO ONE calls Them "baby" except each other! i was filming & thought a fight was going to break out! Luckily one didn't and the loser took everything They gave him including some repeatedly HARD kicks to his nuts. The worst part wasn't even the ballbusting, it was Princess Jenna laughing sadistically at this poor guy's plight. They're not faked either, only download this if you have a strong stomach & enjoy watching cruel, heartless Bitches make a guy whimper in pain. Bonus interview at the end featuring the Lesbian Goddesses discussing the power rush They achieved from this session & verbally tearing into this dude, saying he can't have offsprings after that haha. i can't believe the poor guy had to pay for that. i actually felt badly for this guy since Krista wouldn't let up on him. This is not for people with casual Femdom curiosities or foot fetishes, only hardcore masochists & lovers of Lesbian World Domination!