Be my toilet slave! From now on you are living in my bathroom. Naked and tied up in my shower you are waiting until i come in using you and humiliating you . I wanna make you my toilet. I will teach you to swallow everything that comes out of me, everything!! And i am expecting you to be my good and passionate human toilet!!

8353 - With this sexy jeans ass, your fantasy goes crazy!

Mistress Lilly just recording more shitty movies ! She love to make home movies while she shitting or pissing and she love to share her passion with you ! The silicone lady adore to shit and piss EVERYWHERE and she is a true Scat Goddess ! For this movie today she recorded 3 scenes where she shitting in her pants, and make her asshole very dirty ! 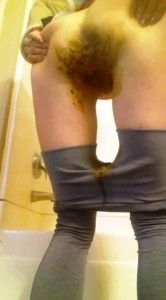 Jack is always slacking somehow. Most recently he's chatting with his colleague on FB and he's doing that late to the evening while he should be still working, since he's paid for it. But what he doesn't know is that his boss, she know all about this.This evening he's again chatting on FB and his boss, Lexi, she's really getting mad at him now. It's time to teach him a lesson. And what is he chatting about? He wants to massage feet of one of his colleagues from HR? No way - his sexy boss has a different idea in her head. She calls him over to her office and asks him to come clean about what he's doing. He's trying to deny everything but Lexi has a report from IT department and she can see the actual messages Jack has sent and received. Now he has no other way than to come clean. Or he can loose his job, that's another alternative.He folds in and asks about his punishment. "Well, since you wanted to massage feet of your HR colleague, you will something similar.". Lexi put's her feet in high heels on the table and says "Take my shoe off and kiss my foot. It's a bit sweaty though. Do it!". This will be Jacks punishment and Lexi's load of fun. This way he'll think twice next time before slacking at work.

Two girls want to produce lovely traces of the soles of their Nike sneakers on the skin of a sheep. They step on it and move on it, but no traces. Then they go to a muddy place and try it again.

Are you a smelly shoe or stinky feet pervert? If you answer "yes" to either of those, then you'll love this video! I've been wearing these pop socks for days -- even slept in them -- and they and my high heels reek! You'll want to bury your face in them and inhale deeply. I can just imagine the boner you'll get, and the things you'll do with it, you naughty pervert!

8354 - Smothered under my dirty socks

I want to test out what this slave can handle and start to smother him under my dirty white socks. My big feet cover his mouth and nose pretty well, but he still tries to cheat by breathing through the edge of his mouth! Obviously, I can't tolerate that - so I grab some duct tape and tape his mouth shut! Now that he can only breathe through his nose, it's easy to smother him under my feet - and I can start to really test out his limits!

When this man came home from work, he is immediately greeted by the sight of two women in scanty latex suits! He tries to make them leave, but before he could he is grabbed, stripped, and restrained! He is then laid down on the floor where one of the sweethearts proceeds to piss into his mouth, leaving him swallowing mouthfuls of pee! By the time she is finished, she smothers his face all over the floor to make him clean the escaped droplets of pee using only his tongue! This isnÂt the end just yet since the same routine is repeated by the other woman! He is again laid down, pissed on, and then smothered on the wet ground! Despite all of that, the mistresses are still wanting more so they proceed to take turns feeding the victim with their pussies! Eventually, they add their ass to the menu as well! The ladies spend a generous amount of time on the activity that they later feel the urge to piss again, resulting to a second round of pee drinking before the finale of him getting beaten up with kicks and stomps!

Ebony Mistress Yolanda wants her footfetish pet now to worship her bare feet. She wants him to lick her sweaty bare soles ( shoe size 42 eu) and to suck the sweat from her long toes. She loves to tease her leashed slave and see that he adores her. He is on his fours and has his worthless face to her goddess like feet....

My ass in jeans is sure to get anyone fired up. But you particularly cannot contain your excitement.Thigh high boots over tight denim jeans and you're reduced to a whimpering heap, desperate for my attention.What would you give to be underneath my denim clad butt cheeks?

Do you like high heels? Do you like to see high heels dangling from a foot? Do you like looking at a pretty woman in tights? If you answer "yes" to any of these questions, you'll like watching Sophia in this video as she relaxes with her iPhone on a bed.

From now on, you serve only me, Goddess Yasemin! There is no turning back now. I will fuck with your mind. There will only be ME. You are there to serve ME. That is your destiny and you know it. Repeat this mantra: I WORSHIP GODDESS YASEMIN! This thought will take root deep inside you and become a part of your life with now way out. You will be conditioned by me to become a perfect slave! You want it and now you get it without the possibility of escape. My sexy tits and my perfect ass will make you addicted to me, that is for certain. I decide about you, your cock, your orgasms and, of course, about your money.

Mistress has had a long tough day and she needs an outlet for her stress, and as expected, it is going to be her human slave! After laying the man down on the living room, she proceeds to piss into his mouth, leaving him swallowing mouthfuls of her urine! It doesnÂt take long before she completely relieves herself, but that isnÂt the end of it! She then bends the slave over and whips his back with all her strength, consequently accompanying her every hit with a scream! By the time she gets bored, she lays him on his back again and this time, feeds him with her dirty piss-drenched vagina as well as her ass! Then, she later gets up, but not to leave, but instead defecate into his mouth! Caught off-guard, the slave tries to spit it out but the mistress is fast to cover his mouth, leaving him gagging and desperately grasping for his breath! When she finally takes her hand off of him, he immediately pukes everything out on the floor, creating a huge mess where the lady then smothers his face into! Not long after, he bends him over and then enjoys herself with one last activity, fucking the manÂs asshole with a strap-on to her heartÂs content!

I want to test out what this slave can handle and start to smother him under my dirty white socks. My big feet cover his mouth and nose pretty well, but he still tries to cheat by breathing through the edge of his mouth! Obviously, I can't tolerate that - so I grab some duct tape and tape his mouth shut! Now that he can only breathe through his nose, it's easy to smother him under my feet - and I can start to really test out his limits!

A monstrously crazy video, you will see an incredible shit mask on BettyÂs face. Smelly shit spread over the entire face of a thick layer, this is really hot scat action in small but very cool video. PS: This is the second part of the video clip of the same name, there is no defecation scenes in this clip, here you will find only a super badass scat mask show, and tons of fresh stinky shit on BettyÂs face. Stay tuned, and check updates, new content is coooooming XD

A fan bought me those acid washed jeans so I could poop in them. Do you like them? Your dick is already hard right now knowing IÂm about to poop in my jeans. My asshole is so full! I tease you and walk around a bit before I empty my bowels. ItÂs difficult to poop while standing up because part of my poop is hard and those pants are so tight! You can hear me moan and grunt as I push I have to push so hard that I canÂt hold my pee. I now feel the warm shit covering my ass. I would love to sit on your face, hump it and squash my poop all over. I walk around and come closer to the camera to show you the back of my pants. I feel the bump with my hands. Then I sit on a chair and make my pants dirtier. I hump the chair like if it was your face! IÂm going to make you lick those jeans clean with your tongue! I want you to be like new when you are done! I tease you again and again by walking around and moving my dirty ass. I go closer and farther to the camera in multiple positions. I love knowing that you are stroking your cock to my dirty ass right now! I can feel the poop all over my ass. Wanna see my dirty ass cheeks now? Beg me! I take the pants off to reveal my dirty asscheeks. Some shit is falling on the floor because the inside of my pants is too full. I show the inside of my pants from a closer angle and then tease you with my dirty ass. I need one of you freaks to come here and lick my ass clean. DonÂt you wanna empty your balls for my dirty ass right now?