It's hands and knees time, loser! My asshole is worth more than your life--and I want it tongue polished!! My loser/sex slave buries his face deep in my cute cheeks, taking in the heavenly scent and seeing how far he can get his tongue up in there (which feels amazing...for me)! Of course, I enjoy making it difficult for him--I have the sharp heels of my pointy italian boots piercing into his stomach as he shines my sugar walls >:) !!! His pain only adds to my pleasure, and he worships my god-like asshole in a variety of different positions (it's like a religion!). Then I make him dry my lovely cheeks with his face...who knew that he doubled as human toilet paper!! He is so lucky to have me find all these uses for him, and add value and purpose to his pathetic life. Oh and... all this asshole licking is in preparation for my date tonight!! All I do is use him and treat him like and he just totally worships me, what an idiot!! (at least he got my holy spit in his face! hahaha!!!) 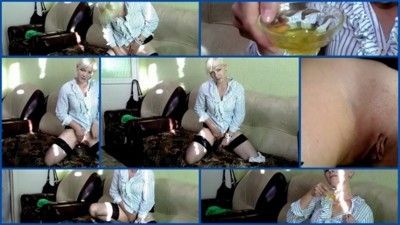 This is my friends' movie. As you can see on the picture it has margins on both sides. The second part of previous (Masopls & Nica 3) movie with predictable ending for man who couldn't stand it any longer... Time: 21,03 min. Remastered - movie from 2003.

Mistress Alexis spitting in a container for 10 minutes. Then with the slave present she continues to fill the container up with spit, before her slave DRINKS IT ALL. After Drinking all her spit, Mistress Alexis starts to spit in her slaves mouth, before she brushes her teeth and cleans her slaves mouth with her toothpaste spit. Enjoy ;)twitter: Sadistic416New videos every week!

ITALIAN SPEAKINGCUSTOM REQUEST Â Mistress sitting lying on a sofa in a house suit while reading a book, the naked slave in chastity listlessly sniffs your farts through your pants. She notices that something is wrong, and points out that he should give anything to smell her aroma, and asks him what is wrong. He complains of the very long period of chastity that he is getting worried, and would like to be released. Mistress points out that she knew what he was facing and tries to dissuade him ... but if he really wants to be released he will have to show up for a session in the dark without knowing what awaits him and without a safe word. The desperate slave accepts.The day of the session she welcomes him in lingerie, ruthlessly makes him undress quickly, puts him on a leash and immobilizes him, and anticipates what is about to happen ... In silence without being seen arrives at the slave's shoulders a bull of a master. Without speaking, he mercilessly ass fucks him while the slave looks at her, and begs for mercy. She looks back, laughing and humiliating him. The bull should then finish fucking in the slave's mouth so that he has to swallow all his cum. While she unties the slave the bull always silently pays her for the performance and leaves. The slave can finally masturbate while she makes him sniff her pussy, but she categorically denies him any contact, and points out that he has become her slut. While the slave comes she pisses on him. Finally, after washing Mistress puts the slave back in chastity and orders him back to his cageÂ

Mistress Jane and Queen Hanna's slave mutt is certainly extremely thirsty. After the two mistresses have finally freed him from his captivity in the kennel, they take care of the filthy mutt with their spit. He gets notjhing else to eat, nothing else to drink. There is only their spit! The ladies spit into his bowl and make him lick the contents out completely. Not a drop of their precious spit may remain - and Mistress Jane and Queen Hanna take that very seriously!

18857 - Smothered and humiliated under stinky socks

Princess Smiley orders one of the slaves to film the other one worshiping her feet. At last also the camera slave needs to suck her devine feet. By the way Princess Smiley is doing her buisness on the toilet when the slaves care for her feet.

In today's session Lady Alice and I start fuck the slave with a strap-on while he is in a latex mask for breath control. First I take him in the missionary position and then doggy style. Lady Alice takes care that he is properly retrained. After all, we do not want him to try to escape! After the fucking the session continues with facesitting and breath reduction, whether he wants it or not. But we have our fun!

In this clip i trample and even dance on Petes hands quite brutal.I do not care a lot and i am not even looking down when i stomp on them. So it is random where i hit them, but the most fun when it hurts ;-)

One day my friend came and he was talking a long time about his tolerance of trampling. So I invited one girl (Anna - 62 kg. ) who exactly knew how to exceed this barrier. Then he was resting a whole week... Time: 9.45 min. 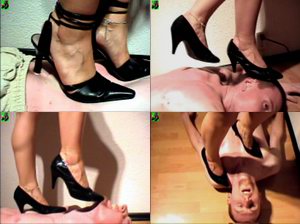 Princess Serena & Goddess Sheila: We have now put the foot slave on a leash and he has to clean our shoes. We have dirty sneakers on. The soles of our shoes are totally dirty and need a slave's tongue to clean them. The leashed slave is allowed to alternately clean Princess Serena's and Goddess Sheila's sneakers and if he doesn't obey, he gets beaten. Come on slave, suck our dirty shoes clean. We laugh at you and insult you and it turns you on. Do you want to clean our dirty shoes forever? WITH PLEASURE! :)

4 country girls star in this movie. One is always tied to the bed and the rest tickle her. They are very ticklish, so they always giggle very loudly and you can hear very well when they are laughing and screaming. In this movie, Kamila. Time: 5.28 min. REMASTERED - movie from 2005

This is my friends' movie. As you can see on the picture it has margins on both sides. The night after wedding... It was really extraordinary night... Time: 6,33 min. Remastered - movie from 2003.

After getting bored of her old slave Krystal came over to our studio looking for a new slave! Wearing her big cute snow boots. There was a winter storm out and a lot of snow got into her boots! (maybe on purpose?) The bottom of her socks were dirty, smelly and wet! By the time she sat down with her feet up laughing I knew by the look on her face that she was up to no good! She was definitely up to something with her devilish grin! I approached my face closer to her socks and DAMN! The smell of her socks was incredibly strong! Very moist, hot and damp! I tried to resist several times but Krystal really gave me no choice! She was there to make me her new bitch and I had no choice.