You're very lucky. No strings attached, no humiliation, sensual joi session. Enjoy the sensual teasing and encouragement, I'm not normally so kind.

I know you stare and salivate over My sweet feet... Wondering just how many wrinkles My soles have, how My toes would feel wiggling in your face, how My feet smell after work... Indulge in your foot fetish. You know you want to...

3876 - Smother Training with Megan and Mia

"You've gotta be able to survive us both!" Mia Annabella and Megan Jones are a force to be reckoned with and this slave is going to have his work cut out for him if he wants to survive their big, smothering butts! The slave is tightly bound in plastic wrap and totally helpless (though two fierce wrestling babes like Megan and Mia could easily overpower and dominate the slave even without plastic wrap, but who doesn't like an immobilized smother slave?!?). The Mistresses take turns smothering the slave while setting time limits that he has to reach before being allowed to take another breath. Megan's amazon like body and big, sexy booty do all the work for her, letting her effortlessly keep the slaves face buried (and crushed) beneath her. Mia's strong thighs and bubble but also swallow the slave's face up easily, but throughout the clip she shows a little extra aggressiveness and she's eager to push the slave to his limits (or even further)! The slave's face gets absolutely destroyed beneath these bikini-clad Goddesses! He tries to squirm free, but there's no where for him to go. The slave is trapped, at the mercy of two Goddesses who are well... merciless! After nearly 15 minutes they finally decide they've had enough smother training and a break is in order, but there won't be any breaks for the slave! Instead they leave him bound on the couch, telling him they'll be right back to use him as their seat while they eat and relax...Megan Jones, Mia Annabella, Facesitting, Smother Training, Plastic Wrap, Bound Slave

** This is a custom I decided to share. No names were used. **I can tell you want to sleep with Me. The desperation is so obvious. You know I deserve at LEAST an average sized cock, which means your dick isn't going to cut it. But I'm feeling generous...let's make a bet - I bet I can make you cum in under 2 minutes.If you last longer than that, you can sleep with Me. Simple, right? All you have to do is follow my jerk off instructions...and stare at My feet. Ha, your tiny cock doesn't haven't a chance. Your little dick explodes so fast. I can keep making this bet, and you'll keep losing LOL

Wake the fuck up. Its been a couple weeks now. You should be use to this early rise. I have some details on your new collar, chores, and a little reminder of who OWNS you. A lot needs to be discussed, pay attention and don't get distracted by my outfit today. Bitch.

It's been a long time since you've worshipped my feet, slave. You came at the perfect time because my feet need to be cleaned. I love how nasty you are, kneeling on the floor, begging to lick my dirty feet. Why use soap and water when I have your tongue to lap up every speck?

Mistress Kawaii is in a bad mood. She's tired and irritated after a long day of traveling and she needs to blow off steam. That's where this lucky facesitting slave comes in! Few things bring Mistress Kawaii as much joy as feeling her slave struggling for breath beneath her massive ass! After a long day of traveling her ass is nice and ripe, which only makes it more fun for Kawaii! The slave knows there's nothing he can do but accept his fate, but eventually the need for air always causes him to squirm around in a desperate attempt to find some air. Of course, Kawaii's bit butt makes that impossible! "Destroying your face always makes me so happy!" Within a minute Mistress Kawaii is already feeling better, giggling as she bounces and flattens her slave's face. "Wow, your face is getting like, really really red!" That only encourages Mistress Kawaii to jump back onto her slave's battered face again. When Kawaii turns to sit sideways she laughs as she feels the slave's nose being completely crushed beneath one of her cheeks. She wonders if its close to breaking, but doesn't let up for a second! She throws in some full weight forward and side saddle face sitting, but her true love is reverse facesitting! She loves to feel her big, juicy booty swallow up the slave's face and let's be honest, it looks fantastic on camera too! If you love big butts and facesitting this is definitely a clip you'll want to buy (along with all of Mistress Kawaii's other facesitting clips, they're all pretty incredible)! Mistress Kawaii, Facesitting, Ass Smother, Bound Slave

You live a lonely and empty life each day. You wake up every day knowing that youÂre just a loser with no where to go in life. No love, no real friends. This is the closest you will get to any female and you have to pay a price for it. This may be your life now but thereÂs so much more to it than youÂve realized. You do have meaning in your life. With me there is always purpose. IÂm going to make you something more than the loser you are now. IÂm going to make you the useful for the both of us. You will be living each day with purpose when you have me to fill that empty void.

YouÂve been a loyal and obedient slave, but letÂs face it...youÂre a broke bitch, and I donÂt have time for subs with no money. I know that serving me is your lifeÂs purpose, and you wouldnÂt know how to go on without me...so IÂve come up with a plan. YouÂre going to start earning your keep by whoring yourself out to men. Use those holes and make some money for me. This is all youÂre good for.

My slave has worked himself to the bone all summer and has now presented two envelopes to his Goddess. How much is inside them? How hard has he worked for Me to show his devotion? Realtime servitude from My hard-working minion.... watch as I count every bill in front of you... and see if I am pleased with his earnings!

3964 - REAL public humiliation at the airport with My slave!

In this video I had just gotten back from a trip to Chicago, and of course My loyal slave was waiting for Me at the airport. he was so excited to see Me and he just couldn't contain himself. he fell to the ground and kissed My feet right there in the middle of the baggage claim area! This is a REAL clip filmed IN PUBLIC.

I know your dumbass asks hot girls all over the internet what their personal dick length is. You're chasing in circles. No one is checking for your 3 inch dick. You idiots ask Me all the time what My dick type is - shouldn't it be obvious? In this clip I going to brutally tell you what you will already heard a million times - your micro worm is not good enough. It's inadequate, just like you.Want Me to make more videos? Tribute. Binge. Adore.

3825 - slave's belong chained and caged outside

In this extraordinary special clip, I will be chaining and caging My personal slave outside, no punishment, I just demanded it and it WILL obey, without question. It looks like rain too, so as I'm out with the Girls having lunch and shopping in My wet look leggings, it will be suffering chained up, caged and locked in CBT, extreme ball weight, ball crusher and locked in a cock cage...Hahaha ok, I'm going shopping, STAY THERE AND SUFFER slave! This could be you too, just apply to be My slave (with tribute) DO IT NOW slave!

Asian amazon Lady Xifeng uses my body as a balcony seat on a hot sunny day. Neighbours were all out. Lady Xifeng enjoyed the afternoon while I was hidden by the balcony's privacy cover and buried me face first into her butt and crotch. She pinned my face between her legs while sitting on my shoulders enjoying the sights while bearing down her weight on me! 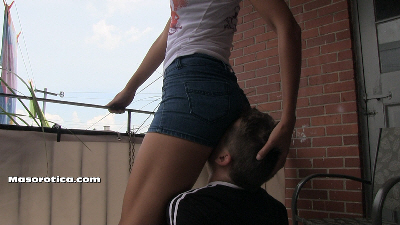 Mistress Kawaii is back and ready to smother faces! Its the start of a new work day at the Executrix Center and a fresh slave has been delivered to Mistress Kawaii to be used and eliminated as she sees fit. "I think I'm just going to take my time with you, I'm not in a hurry!" It may sound like heaven to some of you, but the rest of this poor slave will spend the rest of his short life fighting for every single breath beneath Mistress Kawaii's massive rear end. "You're basically gonna get destroyed by my ass," she laughs while seated firmly on the slave's face. Kawaii has no sympathy for slave's and sits without a care in the world, casually crushing the suffocating the slave while she considers how worthless a man has to be to sent to The Executrixes. "You're actually really lucky that I'm not busy today. This is gonna be so much fun!" Nothing can save this man now, no matter how much he begs for another chance, Mistress Kawaii is determined to smother him out! "When I'm done with you you aren't going to be breathing at all!" Mistress Kawaii switches between forward and reverse facesitting as she destroys her new slave. She pushes him further and further, smothering him more and more as she goes. She also continues to remind the slave that there is no way he can escape his sentence, laughing as she chips away at the slave's hope for survival. The long, slow process of breaking a man before completely destroying him is what Kawaii loves most about her job and she intends to drag this ass-ecution out for as long as possible. The slave struggles and begs for mercy, but his fate has been sealed beneath Mistress Kawaii's delicious ass! Mistress Kawaii, Face Sitting, Smother Box, Executrix Files, Femme Fatale Fantasy

you crawl to Me on your knees with this wrinkled wad of ca$h for Me to count, while I am comfortably reclining in My Palace. After all this time, THIS is what you bring Me? What an absolutely pathetic tribute. I am perfection. I am worth more, and you can and will do better. I am not impressed with your tribute..... you need Me to tell you how to perform better for Me. I will only say this once...