Becca chats it up while crushing my skinny rib cage flat! By the end of the clip you can see my face turn as red as her pants! 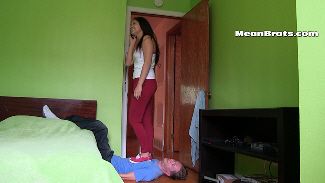 Hmmm - you think about how those stinky jeans may smell?They have been worn for a long time without being washed, coming directly from the laundry basket.Why should they wash those jeans when they can press them into the loser's face unwashed?The two girls Jane and Layla knock the stuffing out of him - come on, now, smell the stink away!

Lisa is wearing her hard office girls shoes & stomps to pieces a solid metal red car, this car is tough & it takes quite a few hard stomps by Lisa, but Lisa is a powerful girl & stomps this metal car smashing it flat under her shoes.

Katelyn's an evil witch who's being hunted by an ancient order of witch hunters. Last night she got a heads up that they'll be attempting to eliminate her once again. Preparing for their arrival, she worked on refining her magic all night- into an outfit loaded with fibers, now making her more powerful than ever.While she was at it, she also used some of her magic to put a spell on her house... if anyone who is not welcome enters, they will shrink down in size to the pests they are. Just as if bugs were entering the house!Now it's the next day and just as expected, she has unwelcome company. It's the group of ancient witch hunters, but they're shrunken!! They must complete their mission regardless of survivability so it's no surprise they came running along the floor to her feet regardless of their new sizes. Before squashing each and every one of them she takes the pleasure of telling them her plans to take over the world.Her ultimate goal is to crush all humans so that her race can take over the world by generations of breeding. First things first- she'll crush each and every one of them. While explaining this, she slips on a pair of thigh high socks. These are no ordinary thigh high socks- these are magical! Each and every fiber is laced and infused with her powerful magic, just like her outfit! With having the socks on too, there will be no stopping her.After crushing them she will use her powers to grow to a Giantess size and hunt down the rest of their group, making them all go into extinct. She will then wipe out the human race by growing hundreds and thousands of feet tall to crush them all- leaving only her people left on the planet to transform the world into the race of witches!This video features a sexy stretchy magic-infused growth outfit, witch scenario, thick thigh high socks, growth fetish dialogue, and socked foot pov crush of a group of ancient witch hunters (5 pov crushes).

Dirty professor is blackmailed. JJ and Drew will publish his video clips if he doesn't let them pass the exam. He has no choice and he except the deal. But the students want more. He must be almost naked, just in the panties and they will play the games with him. Standing scissors.

Full 15 min match of competitive submission wrestling between Mysteria and Tina in wrestling event in Athens 2008.

Get on UR knees BITCH.. Stick your tongue out & Get ready to clean my Running shoes & then ALL My toejam once I take them off. HA HA

75531 - Denise sticks out her ass into your direction

Denise?s wearing a slightly see-through thong under her leather pants. She sits down on the chair reverse and shows you her great leather ass! And as she knows you especially like it she also sticks her butt out far - so you can see her thong sticking out the top! Sexy Whale Tail!

Since the beginning of my regency, my army of ants has steadily expanded. At the moment 63 slaves from 9 countries in 3 time zones serve me permanently. Slaves all over Europe, from the island of Fuerteventura to Norway are my will-less drones. My goal is to massively expand this slave army and extend it all over the world. Buy this clip and experience what my kingdom is all about.

Jessy is a snobby Latina we met who agreed to model Her super old, trashed Converse chucks, then graciously took them off to show us Her cute 'n not-so-clean socks. She told us to sell these chucks & stinky socks on Her behalf, She's totally down.

Miss Nikki (right) kicks Her slave in the face HARD. She lets slave kiss & lick her feet as a reward for taking the kicks - feet right after She wore flats allllll day long. Her sis Vikki told us ahead of time She didn't want any males licking Her feet, but She made sure to tell the slave how pathetic he is for paying to lick Her sis's sweaty-dirty feet.The boyfriend is grinning because his Girlfriend is getting paid for something he'd rather not do. He'll stick to kissing & cuddling his Girlfriend. Totally candid, totally humiliating!

Mysteria gives John a piggyback in her orange 5 inch heels. She carries him around the room and does squats and glutes and ham stretches. Her legs and ass are in very good shape!

He slave gets humiliated by my and Miss Lori. He has to take off our boots and smell and worship our feet. 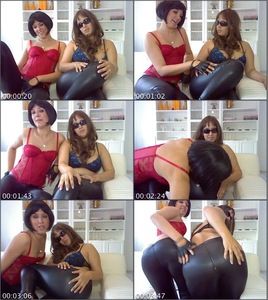 Cassandra is the kind of girl who wants to control everything all the time so she thought it would be a perfect night to evaluate the work of our webmaster! That was a very long day with her boots on so she sits on his cock just to make sure to keep his total attention! She makes him take her boots off then completely cover his face with her sweaty high knees socks! They were ultra hot and smelly but she knows this is just the perfect way to have his attention! She starts the clip on the laptop and gives her appreciation on his work! It seems like she's not really happy with it! She rubs her smelly socks all over his face as a punishment for his really bad work! Cassandra also takes her socks off to completely smothers his face with her smelly bare feet! She can really feel the power of her feet in this position now so that?s the reason of that innocent smile on her face! It seems like she loves it! She makes him take some deep breaths in her feet and stick his tongue out to lick the dirty bottom of her soles! She also takes advantage of him and makes him lick all the dirt in between each of her toes! One by one! Very Hot Clip Alert!

Cocky 'n rude models Miss ChloeAmour & Miss Vanessa V make fun of Their doggie & make him remove Their gorgeous heels.he gets the privilege of sucking Their sweaty toes while They laugh at him. Hot!

Arrogant Lady Malu chokes this loser with the power of her hands ... with her legs and with the foot pressure on his throat