slave, i want to smoke young bitchy mistress lady chanel says. of course her old slave appears at once and first she attaches a leash on him, so he cant get away.then she gets her a cigarette and lighten it up.dont come too close to me slave, i dont want that the arrogant bitch says to the old slave.she loves to humiliate old pathetic men like this dirty perv.i think you can eat my ash again she says whil blowing thick loads of smoke into his face.next she humiliate him even more by resting her high heels into the legs of the slave where soon nice marks appears.as she puts the next load of ash into his mouth it falls down on the floor,what are you doing you idiot? are you even too stupid to eat my ash? lick it off the floor.and when it happens again, she announces do it again and you will sufferÂwonderful classic human ashtray clip! 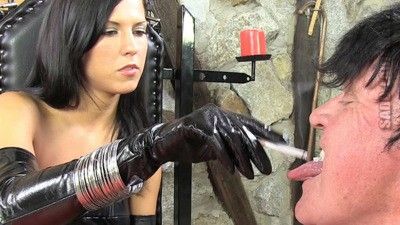 Alisa once again humiliates poor larisa forcing her to worship her feet. Slave girl licks the feet of her young mistress not having the opportunity to contradict her. Alisa insults her slave girl and humiliates her morally. Alisa likes to feel slave's tongue on her feet. From time to time she hits larisa with a whip. Alisa throws pieces of pizza on the floor and makes her slave girl eat it from the floor. A slave girl leads her tongue all over AlisaÂs sole and sucks her toes. But larisa can't satisfy her young mistress as always because Alisa is very hard to please. Main and GoPro Camera. F/F foot domination. (English subtitles)

Slave Buddy awaits his Sad Fate, kneeling on the hard floor - hooded like a condemned man - in front of his female executioner. The name of the Fatal Woman is ÂLittle AcabÂ. She is known to be one of the most cruel mistresses in Italy, a very rough girl who simply loves to put a slave in his place and teach him a hard lesson in the only way he understands! With bad manners and pure malice, Little Acab starts spitting hard: obviously, BuddyÂs face will be the target of her spits! Slave Buddy will be turned into a human spittoon, a laughingstock, a perfect target for faceslaps, insults, mocking and humiliation. After running out of saliva, the bad girl decides that it might be time to clean her nose, by picking it and spreading snot across BuddyÂs body and dresses. The camera angle (the camera is placed behind the shoulder of the slave) will give you the same perspective as if you were there to receive saliva, catarrh, boogers and insults. If you like spits and snots domination, verbal abuse and extreme humiliation... don't miss this nasty hot video!

I have been expecting you for a long time! From now on you are my Amazon slut every month you will give me an Amazon voucher code for an appropriate amount. I am your Princess, so of course I don't pay for my purchases myself. That's why I have YOU, you little bitch, who I exploit for my own purposes. You cannot free yourself from this, because with the purchase of the clip you enter into a contract to serve me and to obey me. I am the Princess and you are my servant. YOU are my paypig because I intended it to be this way. It is your destiny! And I want you to live up to your name. So send me the first voucher code... NOW!

There's a bunch of food scattered across the floor, some raw eggs and various little cakes and pastries. I walk through the room while checking my phone and crush what's in my way. The longer I walk, the more items get crushed under my high heels. After a few minutes I change my shoes to a pair of flats and continue to walk through the room. In the end almost all of the food items are crushed and it's a huge mess on the floor! This is a non-exclusive custom clip for a fan. If you want me to do a custom clip for you, send me an email to marissa@madamemarissa.com!

I'll make you feel as small as your dick. Absolutely tiny and ridiculous. So disgusting! I know you like it, how I insult you and your small, puny tail. Only I can't see your joy because hit is soo small! Is your cock hard already? I can't see it, LOL! It's so small that even wanking is impossible for you, so you can only uselessly fumble around with yourself and pray to me!

2 slaves VS 2 mistresses. Sport competitions! It was a hot competition, every girl wanted to win and tried to get the most out of her slave. At first, the girls threw dice, the dropped out figure determined the number of blows to the face of slaves. When the girls played enough, they also chose slaves for themselves with the help of the bone - even and odd numbers determined which slave Christina would serve and which Victoria would serve. I wanted to serve Christina, but Christina went to Mark, I was for Victoria's toilet. The girls put chairs on us and two gorgeous butt hung over us, out of the corner of my eye I saw Christine's ass and envied Mark. Kristina shit powerfully with farting, I immediately felt a strong smell of Christina's shit, it is liquid and immediately starts to smell strongly. At the same time, I sympathized with Mark. Finally, the girls finished shit and began to feed us. Shit Victoria was like plasticine, but had a sweet taste. I swallowed through great torment, sometimes it seemed to me that I would vomit again. The girls sat on us and because of this swallowing was even more difficult. They laughed, had fun and were very demanding, since every lady wanted to win. Mark was also hard, but he is still a fresh slave and enjoys the strong smell and taste of beautiful girls.

Watch me tease you with my ass i know your hungry for my shit and now your going to get it..I put my asshole close to your face opening up my hole to reveal that shit inside before closing itÂ.Nows time for your meal, i spread my buttcheeks and push out a slow big logÂ.I want you eating every last bit.. I show you it close upÂ.Your now my toilet nowÂ.

Let me tease you first with my sculpted legs and cute smile. In my mask and wearing my poop-brown heels and matching sweater dress I playfully get intimate with the camera. Riding the toilet backwards I take a piss and then stand up, spread my ass and let out a long shit. I get down on all fours, take a close up look of the log I've left in the toilet and smell that stinky, sweet tangy crap before teasing you further with my asshole. This would have been the perfect dump to take on your chest. Take a closer look of it on the white porcelain bowl. xoxo Sweet Tang

You have an itty bitty dick, so tiny and cute. Too bad it's useless to anyone but yourself. Well, aside from giving everyone a good laugh! Aw, feeling sad for yourself? How about I fulfill the only purposes your dick has? Get off for me, make me laugh... it's all your dickie is good for! Good thing humiliation gets you rock hard! Let's see if you have a normal sized load. I'm oh-so-curious, loser! Make a mess for me! Life is short and so is your penis.

All the girls are weighed and their weight is indicated in the film, over 911 kilograms/ 2002 lbs. We already have someone just for this assignment, so he lies under the board. The combined weight of all the girls is the same as if a small car would drive on top of him. Time: 12,36 min.

You know you're nothing more than a foot addict! All day long you scour my websites looking for pics and video of my feet! You need to have them! You'd give it all to be my foot slave serving me in real life. You can't get enough of me and my soles. My feet keep you going... You'll never have to feel ashamed of your adoration for my feet, as foot fetish is the most common fetish in the world! Embrace it! Show me how much you care, how much you want my videos... Show me how much you want to be my foot slave. You're MY foot addicted jerkaholic, so cum to my countdown! This is the only fetish you need. Filmed in 4K.