In this video I concentrated on my slave's fingers and hands. He's clearly confused when I gently kiss his hand in the beginning - only to bite into his finger hard only a second later. I decide to keep his game going and always alternate between gently kissing or sucking his fingers - and biting into them really hard. Of course I torture all of his 10 fingers and both of his hands with my sharp teeth :-)

At over 500 lbs, I imagine Savannah would present a challenge to an actual horse. So when she asked Matt for a horsey ride, you better believe he was in for a struggle.He made it about 5 feet or so. Once he slowed up and showed signs of struggle, Savannah demanded that he try and do a push up. In a flash he was pinned to the floor with Savannah sitting heavily on his back. He's not used to this position... ordinarily he is on his back during squashing. He was quoted as saying, "It felt like my ribs were being driven through the floor."After some heavy back sitting, Savannah though it was time to crush his belly and chest, so she demands Matt to rollover and she plants her luscious ass across his entire torso... chin to waste.

Sometimes you just have to tie him down and make him have it. This is just what Goddess Chleo does in this scene, straps him down so he's helpless, then has her way with him. Lots of foot smothering, face sitting and trample as Goddess Cleo enjoys dominating him. Lovely scenes as she orders him take her stocking off and he submits at her beautiful feet. The domination chair becomes a throne for Goddess Cleo, who wouldn't dream of being her slave?

Damn! This clip was shot very late at night after party so it's kind of amateur style! The way we like it! Kristina and Maika have walked all day long in their shoes with no socks so just imagine how bad they stink! They first order him to lick the dirty bottom of their filthy converse before they take them off to cover his face with their sweaty feet! The slave must also lick the bottom of their soles while they're laughing at his face! It seems like Maika really enjoy to fuck his mouth with one of her foot really deep into his mouth! How deep can you take it bitch?

First part of the video.The video begins with Steve with his hands already bound tightly behind his back. He?s on the floor facedown, when sexy Kristiana?s bare feet walk in front of his face. He awakes to see the sexy feet in front of his face and then up to the dangerous legs of the sexy woman towering over him. ?Steve, you?re my toy for the rest of the night! I?m going to squeeze you. I?m going to tease you. I?m going to smother you. You?re going to worship my feet. And I?m going to sit on your face! A lot! And we have all night to play together! This is going to be so much fun! For me, at least?? she says as she sits on him. Steve is distinctly unhappy at that prospect and tries to talk Kristiana into untying him and letting him go. Instead, she laughs and turns his face so she can put her bare sole in his face.Then, she pulls him into a close sleeper hold, breast-smother and facesit him ...!! 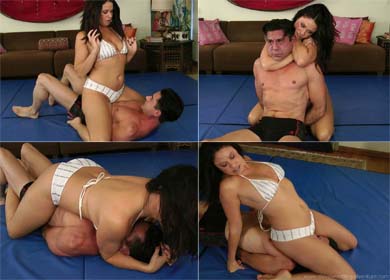 Oh. Its YOU, back again. Im not really surprised, I know how much you adore my feet, even when I have been to the gym working on my super gorgeous body (which you will NEVER get to see) and I leave my feet all sweaty you just keep staring, YUCK. Real men like naked, and you are nothing more than a desperate foot slave.

You are so addicted to my beautiful, slim, long neck.... and the black stocking on my throat looks so sexy.... it shows my veins, my adam's apple when I swallow and drink a glass of water.... you just cant resist to buy this clip and watch it;) 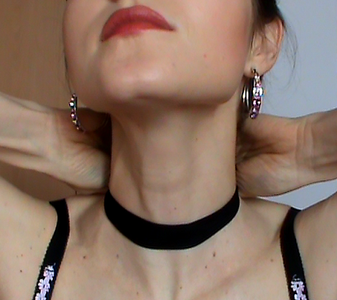 What a hot jeans Mia is wearing right know - it really shows her tasty ass to advantage. Download the clip now and see Mia in action!

Today Svenja has a special task for this loser.She takes off her shoes, wanting the loser to take a sniff at them.But it's not only sniffing her shoes she wants from him. She is pressing his head down into the shoe so that he has to inhale the odor.And while he inhales the strong smell she slaps his face again and again, and hard.She wants to hear him smelling her shoes and every slap makes the loser inhale the aroma more intensely.

Holy Fuck! Here's Another Hot Chix with Amazing Sexy Feet Size Eight! Chanelle teases you with her boots on before she takes them off to let you sniff her Sweaty, Stinky Socks! She'll Seduce Your Soul and catch Your Attention Easily with her Sexy Feet on Your Face! Trust Me! She smothers your face with her Stinky Socks before she takes them off to let you taste the bottom of her soles! How do you like them Nasty MothaFucka? You'll have to bow down on your knees and suck her toes one by one like a Lolipop and You'll fall in luv one more time!

A Sex Perv has been Obsessed with this Beautiful Woman for weeks.. He's been hanging around the places that She frequents & today he's followed her home.. He's been waiting for the perfect opportunity to Attack.. But Unfortunately for him.. He doesn't know Everything about her! She may be really pretty.. But She's a Sexual Sadist & Also a VERY Skilled Fighter.. She's an Expert at Martial Arts & her FAVORITE thing to do is to Front Snap Kick a guy in the Nuts & then Laugh Hysterically at his Pain.. Well he realizes what a big mistake he's made soon after he Attacks.. She's so CRUEL & Couldn't Care Less that a Strange Man has just broken into her Home to Attack her.. She's been waiting for this Moment her whole Life - it's an Opportunity for her to Live out her Ultimate Fantasy.. To Totally RUIN a Guy by kicking him in the nuts!.. So She Front Snap Kicks him in the balls Over & Over Again with those Combat boots of her's.. She's DETERMINED NOT to Stop til She's RUPTURED him!

Katelyn tells you to come closer and look at her strawberry. See all the tiny seeds? She likes to imagine that every seed is a little living person! She loves eating her strawberries with cool whip. She dips it in, closes her eyes, licks and enjoys every single seed. You could be any one of them!

So you thought you could leave these out for a snack for later & that I wouldn't find them??.. WRONG BITCH! When I find them.. I Walk ALL OVER Your Peeps & CRUSH them Right into the Concrete! lol.. I STOMP them & GRIND them into the Ground Under My SEXY Stiletto boots.. Just Imagine what I could do to your nuts! HA HA.. Don't Worry.. You can still have your snack.. Just lick up all the stains LOSER! lol

You stuipid loser start drooling as you look at me; my beauty and divine arrogance are killing your little brain immediately. I'm the most pretty thing you can have in your fucking life and you have to pay me till the end. Yes, you always dreamed to be a super lover but you never got to that and nobody cares. So shut up and pay - FUCK YOU!!! 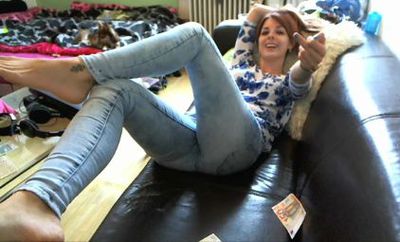 Sexy hands in sexy nylon gloves. Lisa knows what you like, and that?s the reason why you are allowed to watch when she shows off her nylon gloves. Slowly, she pulls them off her hands. Now you can see her naked hands. Want to kiss her hands? Want to see how she measures her hands? Watch hot Lisa!

Lady B crush a racecar. First she walk over it with her flat wooden Mules and begins to crush the Car. Later she slide in her wooden High Heel Mules and crush the car completely.

Jordan and Presley love to rest their precious feet after a long day at work with their high heels shoes on and it seems like there is nothing like a human face to rest their feet! Presley is the first one to take her shoes off and completely cover this loser face with her sweaty nylon feet! She seems to love the feeling of having a human face under her smelly feet! Jordan is also curious to discover his reaction so she also takes her shoes off to smother his face with her smelly nylon feet! It is not easy to work as a flight attendant so they really needed and deserve this foot stool under their feet! They both take pleasure to rub their sweaty feet all over his face and make him stick his tongue out to lick the filthy bottom of their nylon soles! Presley is also curious to know how deep he can take her foot into his mouth just for her own personal pleasure! They both also want to compare the smell of their shoes on his nose but it seems like this loser can't talk so it's not easy to have an answer! Very Hot Clip Alert!

Stella meets her slave in the forest. She's upset because she has allowed him no output. She punches him in the face and tie him to a tree as punishment. She does not care that other people walk past. You can hear the other people, But it does not matter to Stella to punish her slave in public. After she has him tied, she smokes a cigarette. She smokes at her slave and she tap the ash derogatory off him. As she tap the ash off in his mouth, he jerks because Stella burn him with her cigarette. After that Stella is walking home. She leaves him for punishment on the tree tied back.

A guy is dressed in tights by Eileen and Teodora. They continue with their shots. Their feet become red and his balls pulped.

Candy uses her footgirl's tongue to comfort her beautiful soles, but Dorothy is yet to learn the art of footworship. No matter how hard she tries to please the Goddess, she is dissatisfied with her foot licking technique. Even so, Dorothy tries to do her best: she licks her heels, her amazing soles, sucks her pretty toes and licks in between them