Cocco loves to give dominant hand jobs to her partners. Today she performs really good. Power stroking, ball stretching, ball massage, two hand stroking! And in the end she gives one of her absolute perfect ruined orgasm finishes. 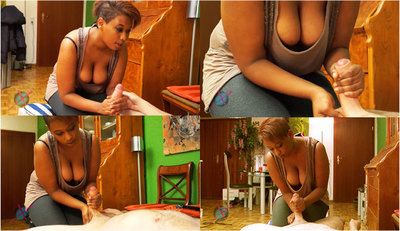 My slave has been abusing my time, and not doing what I told her. Instead I caught her chatting on the pc. She's going to be severely punished. So I hooded her in a gimp mask, and left her to wait in a corner of the dungeon all day until I return. I arrive back and now have her at the foot of my throne ready to receive her punishment. I'm going to give her a whipping she won't forget. I tell her to remove her clothing and kneel before me. I have a new whip that I want to try out and see the results. As I begin to whip my bitch, she already starts to squirm. It looks like my new whip is going to do some damage. I continue to beat her, and as she finishes kissing my feet, I tell her this is just the beginning and thet she's really going to suffer. I order her to crawl to the suspension area, where I bind her feat and fasten them to the suspension cable. I raise them just enough to allow me to whip her ass, before hoisting her up in the air. As she wriggles in mid air, I tell her she is going to feel some real pain. She's now completely helpless and I'm going to give her a 100 lashes, she has to count the strokes. I change whips, and use my favourite bullwhip. I warned her she better not lose count, or it's back to the beginning. As I continue, I know my stinging lashes are beginning to affect her concentration. I deliberatly intensify the pain so I can start again. It's such a pleasure inflicting this pain on my disobedient bitch. Eventually we reach a 100 lashes on my bitch, and I'm disappointed she managed to keep count. I finish her off with a good ass slapping, before lowering her to the floor. What a lucky slave to be allowed to bear the autograph of Mistress Gaia...

Betting debts are debts of honour - I lost a bet that I could swallow it all! My shirt got stained, so I have to be topless while I am driven around in the car. This is so embarrassing! Watch how the people look at me!

You're a loser all along the line who needs and wants to hear the humiliating reasons all over again! Everyone's exploiting you like a dumb, stupid pup and you're an ass-kisser to all authoritatian persons! In the end you always recognize that you are and always will be the last link in the chain!! And what about your wife? Oh I'll tell you what she's really doing when she tells you that she's making sports. In fact, she really does sports... but rather inside the bed of an alpha-man, than in the gym! Are you at least a good money slave? Come give me your hard earned money, loser!!

I'm so MEAN to this BITCH Today! I SPIT in his face & kick him in the nuts & SLAP him & Make his blueballs HURT so MUCH WORSE! lol.. The LOSER hasn't had any type of REAL Release in OVER 2 Weeks NOW & I've been using My perfect lil SMELLY feet to Tease & Deny him Daily - He's been in Pain with blueballs 24/7! Well I just came back from My Aerobics Class & My feet are Sweating in My Shoes & I Know they STINK.. So I decide to fuck with the WIMP Even MORE. I tease his caged cock & tell him that IF he helps me with my "Cool Down Routine".. I Might let him Cum to Relieve his PAIN. I walk him around the room like a doggy & ABUSE the SH*#! Out of him.. I Make him lick the Dirty bottoms of My Gym Shoes & Start kicking his frustrated dick around.. I take off my shoes & rub my pretty feet together with his HARD Throbbing cock trapped in between them.. The BITCH Begs Me to Finish it.. But I DON'T. I just Laugh at his PAIN & Leave him MORE Frustrated than he was BEFORE! lol 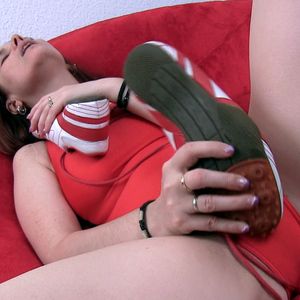 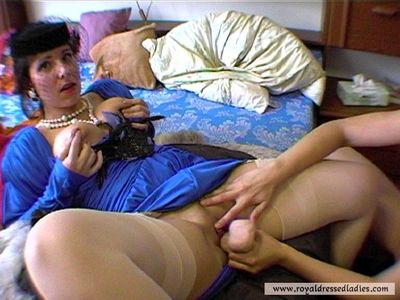 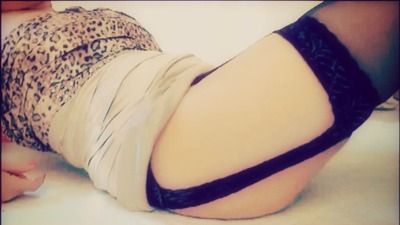 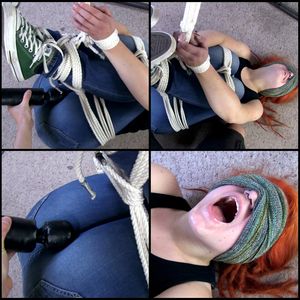 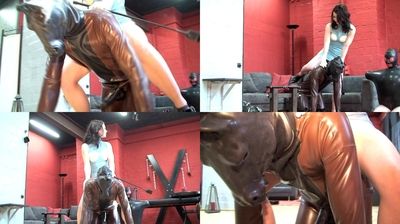 After a long jog under the hot summer sun Candice will teach her stalker a lesson he'll never forget! She orders him to the ground and stomps on him, putting him in his place! She has him remove her running shoes and places her sweaty wet socks over his face! "You like my stinky feet? I ran for like an hour!" she says smothering his face in them!"How does it taste? You wanna watch me? You're gonna taste the sweat off my toes!" Candice says shoving her toes into his mouth! "Stick your tongue out! Stick your tongue out really far!" Candice says wiping her dirty socks over his tongue from top to bottom!"Open your mouth!" Candice orders as she pries into it with her toes! He begins to twitch as she gags him putting her toes in and out of his mouth! Now for the final stage of his humiliation! She has him remove her socks! She rubs her bare feet across his tongue before smothering him with them until he faints!"You're up now? You passed out before I could do anything!" Candice says slapping his face around to wake him up! Now she's going to sit on the perv's face in her sweaty wet jogging pants! After smothering him in her bum sweat she slaps his face around with her foot, keeping him conscious to prolongue his suffering! In the end she remains seated until he's out cold for the 2nd time!WE'RE GOING TO KICK OFF THE SUMMER STRONG, AND WHAT BETTER WAY THAN TO LAUNCH WITH A SUMMER CLASSIC IN IT'S COMPLETE FORM FOR THE FIRST TIME FROM ONE OF OUR LEADING FLAGSHIP 'MEAN BRATS', CANDICE! INCLUDES NEVER BEFORE SEEN OUTTAKE AFTER CREDITS! 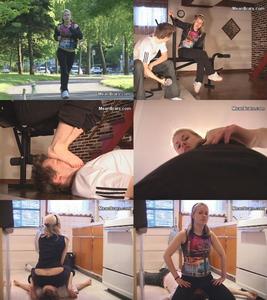 Today, Mistress Giorgia invites all the shit-eat and drinkers to reach her to consume her divine excrement.Start pissing in the funnel and filling a full glass of piss, then the Mistress goes on and gets a good scat in the funnel, always in the foreground you see the hole of the ass that widenes and begins to go out of his divine shit.She passes the toilet paper on her ass and gets dirty immediately with shit, ready to be put in the mouth by the toilet slave.The funnel is full of shit, the Mistress takes a piece and invites you toilet slave to open your mouth to eat it ....!

I had to put my most stinky socks into a plastic bag. Even I myself wouldn't open the bag, because the smell is extremely awkward! These socks are only for you, little sock smelling slave! But first I have to educate you in small steps. You'll start with socks that I've worn for one day. After that you get my two-day-socks and so on. Let's see if you can handle them and how war you'll go! If you do well, you receive my extremely stinky socks inside the plastic bag!