Tania and Gisela roughing up a gentle guy.Kicking, slapping and trampling 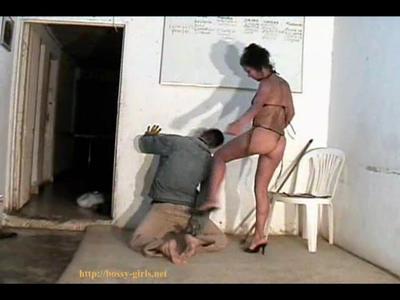 "What a lousy slave you are - you didn't follow my order to jerk off in public? Well, that means your slave training continues with a punishment. Get a rope, a belt and then listen to the punishment you deserve. Pathetic little wanker - I'll show you what happens when you don't follow my orders precisely!(only for pathetic losers that didn't manage to complete my instructions of day 2)"

No wonder he chose to his maids sexy blonde ... After watching this video you will know why!

Sarah tramples all over Mark in her steel heels these shoes really hurt but he must take the pain, this girl marches & tramples all over him & doesn't care if she hurts him or not, Sarah has fun trampling him whilst he squirms beneath her.

Angelina's wearing her tight jeans and a pink thong for you. She knows how hot it looks when her thong sticks out a little bit and to increase the hotness she even sticks her ass out right into your direction. Simply hot!

Custom clip request ""following is a suggestion for a video clip, only you POV. The title could be "Strangler in Leather" or similar. You wear a black leather outfit, black leather jacket, black leather gloves, black leather skirt, and so on, full black leather. Glasses are welcomed, if the glasses are not dark and I still can see your eyes. I suggest a hairstyle similar to an office lady. Please not much make-up. The video has the theme of a leatherclad POV strangler, choking with hands. You play an assassin, who is an expert in . I suggest to divide the video into a "threat part" and a "POV part". The "threat part" demonstrates, how you the viewer of the video to . It's a threat against the spectator. Therefore, the "threat part" has talking and your leather gloved hands are to see. You look into the camera and announce the coming events. Sadism is very welcomed. But in my opinion, laughing would distract from the theme of a professional killer. It could be similar to an instructional video. There are different ways of how to . It can be done with a pressure of both thumbs at the larynx. Or you press at the hyoid bone, the thumbs are more above than in the larynx version. Or a special carotid arteries stranglehold. Both thumbs move sideways for closing the carotid arteries. It's a special kind of stranglehold, the hands and thumbs don't move inwards, they move sideways. Closing the carotid arteries not only interrupts the flow into the brain, the whole stream is blocked. What about a combined stranglehold ? First your thumbs move sideways for closing the carotid arteries, then inwards and above for more pressure at the hyoid bone. Or another combination. One thumb at the larynx, one thumb at the hyoid bone, your palms constrict the carotid arteries. There are many, different ways of . I don't know, which version you prefer. Hope you like them all. But it's also okay to choose only one way of . The "POV part" is a POV as realistic as possible. The virtual opponent stands. You form your hands into a a stranglehold. The form of your hands is unequivocal, fingers are together, thumbs across, but not above each other. Both hands have the same height, are at the same level. Your hands come and disappear at the bottom of the screen. In the "POV part", I can't see your hands during the , because they are under my chin around my neck. This camera angle shows, how your victim would see it in reality. But your hands are to see in the beginning and after the attack. The "POV part" has no talking, just merciless killing. But you also look into the camera. At the best, you act like a secret agent or hitwoman. You imitate pressure, facial expressions and moves with the arms. There is no talking in the POV , because you concentrate on , still looking into the camera. Please don't press at the camera or the tripod mount of it. This would result in distracting cracking noises. The virtual victim surrenders. You begin to smile sadistically. You keep your hands around the virtual neck, smiling sadistically, but still don't talk. After a while, you slowly withdraw your hands, they are visible again and still have the stranglehold form mentioned before.

Mara wants to show you her hands today. She has creamed them before and so they shine very bright and intense! Now they look even more gorgeous... and also smell very good! Do you want to kiss them...? Do you love her fingers...? Then start sucking them when Mara puts them right in front of your mouth!

This is a great show of me while I smoke a cigarette - don't wait to long - and get the clip!!!

Chloe brought her gorgeous 21 year-old friend Julez in, who has never been tickled on video and never been tied or bound for ANY reason.Julez is bound at the ankles and gets her feet - in and out of socks - tickled by female and male hands. At one point the male camera guy wags his tongue on her soles, but it's Chloe's fingernails which REALLY makes Julez produce that cute, squeal-like laughter! So hot, once you hear her laugh you're gonna pop a boner.Check out how smooth her soles are too! Includes personal interview questions about her tickling experiences with girls & boys, as well as part of the tying-up process.***Wanna contact Julez or Chloe? Wanna tickle their cute feet in person? Email Julez - her email address is at the end of this clip!***

Mikaila needs a lot of attention so that why her slave must be ready to serve all the time! That was a very long day at work with her shoes on so she needs to rest her tired feet! She sits on her slave to use him as a human couch then takes her shoes off to completely cover his face with her sweaty nyloned feet! They were so hot and smelly! Mikaila thinks it is just the perfect spot to rest her feet! She rubs them all over his face and orders him to take some deep breaths in her toes! She also wants him to take his tongue out so he can lick her smelly feet and taste her sweat! She makes him take some deep breaths in her shoes just to make sure he remembers that smell for the rest of his life!

Did you get your list done? Lets double check I go through you list of chores and interrogate you about the things that need to be done, slave positions you need to relearn since you suck so bad at remembering. I am disapointed in you and expect better next time you come to see me.

First she made you spend the night in her lingerie closet while she had sex with her boyfriend. Now it's the morning after. Stephanie is calling you out from the closet, loser. Your job is to crawl and collect up all their dirty, cummy condoms - with your teeth. If you miss any condoms? You are going to be severely punished and humiliated by wicked Stephanie.

Well, look into my eyes, loser! I don?t have any purpose for you at all. You?re good enough for paying at best ... you and your tiny dick ... you?re nothing! You can go work for me ... and look what I do with your money ... I and my friends laugh at you and how stupid you are! You?re worth nothing ... absolutely nothing! You?ll never get me or a woman like me, loser, you won?t get anything precious in life - and I?ll also take your money!

Mistress Mara got something for you. She spits on the ground and wants you to lick it. On top of that she rubs her high heels in the spit and demands that you lick the soles of her shoes as well. This mix of dirt and spit is the right thing for you. Come on, lick every last drop just like mistress Mara demands!

Muscular Maria is totally out of control !! A fest of painful and humiliating holds including : hand-choke, pin, hair-pulling, body-scissor, head-scissor, boston-crab, throat crushing, arm-bar and some holds never seen before ... !!! 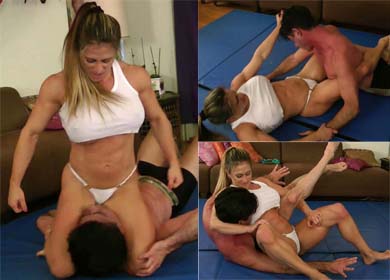 Indira and Lady B torture a Unicorn with her Boots and hands. She destroy the poor Unicorn completely.

Today you will have to lick away the dirt from my boots! Every little piece of dirt! They are completely covered with mud because of my walking in the woods! While you do your work I'm going to humiliate you! :) This is exactly that what a dog like you deserves! Look there! There is another big piece of mud! Clean everything, you loser! Eat my dirt - and don't forget to say "Thank you!"

Four friends are having fun. They spent a day together in the city and now is the time to relax. They call the obedient slave to sniff the smell of their sweat and clean their shoes, boots and sneakers. There are a lot of goddesses in this room and the smell is intense. While the slave is licking and smelling they humiliate him just for the fun of it. After a while, to help him do the job of sucking all the smell out of their feet, they stand up and put all of their feet on his face. He must stay focused as they stand on him and have fun.