Beautiful black fetish findom princess in sexy white pumps. I just love pushing my sharp sexy high heel in your face so you can lick it while I take your money and degrade your manhood. A matching pair of white latex gloves so I can slap the taste out of your mouth and laugh at you.....

This is my first video and first time that i was shit in to pants â nylons. It was beautiful feeling and i will definitely continue with this:)It was in my bathroom in the tub. I was holding this shit for 1 day. First it go piss, very nice feeling as well, and then of course smelly soft shit.When is my pants full, i smear it. My friend who was filming, smearing and pushing to full pants as well. Then i tear up the nylons and smearing all around my ass.

Goddess has her sissy slut serving her. She wants her sissy boi to feel more sexy and feminine as she serves her true Superior. Awakening her flirtatious feminine side to make sure sissy is at full mast and undivided attention, Goddess Minoa ensures that the sissy boi gives 110%!

Cassandra likes to take advantage of your foot fetish all the time so that was just another perfect day where she thought she could use as a slave after a long day with her perfect feet inside her converse! She teases you with her feet inside her sneakers before she takes them off to let you take a deep sniff inside her sneakers! She wants you to smell them, and also wants you to stick your tongue out and lick the dirty bottom of her sneakers! She also wants you to sniff her socks because she knows how bad you love that strong smell of her socks after a long day inside her sneakers! She also knows that you are probably jerking off while watching her clip so she wants you to insert your cock right in between both of her warm socked feet! She wants to play with your cock with her feet! Your cock is now extremely hard, so Cassandra takes her socks off to rub her sweaty naked feet around your balls! She wants you to sniff her feet, and stick your tongue out again to lick the sweaty bottom of her soles! She also wants you to insert your cock again right in between both of her feet! She is actually thinking about giving you a footjob, and she wants you to cream both of her warm sweaty feet with your cum! Are you ready for this?

Mistress knows how addicted you are to her amazing ass and twerking videos. In this sexy video she twerks for you while she insults and degrades you! HAHA!

When I found the deer stand in the forest, the ranger asked me whether I'd like to get tied up a bit. Maybe he's into bondage, who knows ? I can use every opportunity to practice escaping, so why not ? 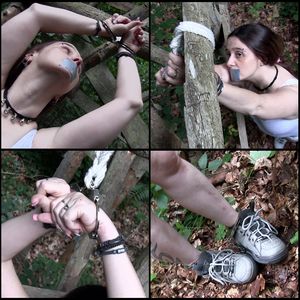 This clip will leave you no chance. After watching this, you will be a member of my army of losers. You will classify yourself as my hopelessly devoted slaveboy. You can not resist my charms, you're a weak-willed mindless loser driven by lust ! I am everything you need, I am everything you want, you have been born to serve me. This is your determination and you will never be able to escape those feelings, no matter how much you fight them. My army of losers awaits you....slaveboy !

Today the slave dog gets a special treat - some donuts. But of course he's not getting to eat them the human-way! I spit some pre-chewed donut into the bowl, add some spit and then throw the rest of the donut into the bowl and crush it altogether under my dirty hiking boot soles. Then I first make him eat the mess from my boot soles - while constantly adding more spit and chewed food to his bowl - and in the end he has to eat everything in the bowl - yuck!

Day light, hot in the city, two fancy girls are ready to go on the day party. Before they go to dance, they need some warm up. Teodora and Misty called their slave boy to fulfil their needs. Real foot domination.

My girlfriend and me were out at a night club. Feeling a little tired we decided to come home early. However, arriving home I noticed the door to my house was slightly open. When we got into the house, we found a burglar trying to escape with some of my jewelry. We managed to overpower him, and I decided to teach him a lesson. We tied him tightly to a chair and made sure he couldn't escape. Asking if I would be ok, my friend decided to go home, leaving me alone with my bitch of a thief. I'm going to make him suffer. He tries to explain to me why he was in my house, I don't want to hear anything he has to say and shut him up with hand over mouth smother. As he tries to get air, I press even harder. He gasps and squirms to get free. However, he's going nowhere as I continue with his torment. As he begs for me to stop, I tell him I'm just getting started. I put a ball gag in his mouth and fasten it extremely tight. His muffled attempts to breathe are amusing. I'm going to leave him gasping and helpless, until I decide other ways I can have some fun with him. Now where did I put those plastic bags?

Lady Tina treat today my other slaves and I film everything. The slave is already trained and does everything on command. Lady Tina enjoys those slaves who make everything. In addition to hard face slaps and degrading things She uses the slave as a human horse and whipped him with the paddle.

Do you want to Kiss these Beautiful Soles? Would you like to Smash them in your face and smell My Clean Delicate Soles? I want you to become Addicted to my Soft Soles, My High Arches, My Cute Toes. Stroke and Worship to My Gorgeous Feet. Stroke as you gaze upon every little detail. I want you to become addicted and constantly crave these perfect feet. FALL IN LOVE with My Incredible SOLES. Loose Control, Lose Yourself as you Stroke and Worship My BARE FEET. As you stroke you can imagine sliding your cock between them and cumming all over them. I know you're a Perverted Foot Boy!

The slave came to apply for a formal employee, and the boss tried his ability to work. Trample on the slave in sexy stilettos, and test slave endurance back and forth. Obviously this slave is not going to be able to do this, this video is very general. The mistress was very disappointed and trampled under the slave's body time and the slave was very miserable.

Yes, you understand correctly, youâll pay an ass tax to me from now on! Watching this video enables me to monthly collect the tax! You love and adore my ass, I know that for sure - so youâll also pay for it! 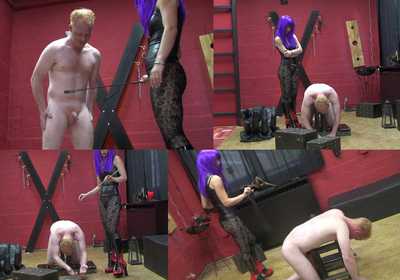