I will not give a truce, you'll be in my grip of legs, you're under my domination stritolo you with all my strength I have fun to use as the pillow that I have between my legs that will reduce in a loser, admires my power. use your head as a springboard to put on your face my ass, you have to lick my soft ass. I'll enjoy doing up and down on your face, you're humiliated loserI'll enjoy doing up and down on your face you humbled loser.

You've a hand fetish and die for sexy fingers and hands? Angelina really likes her hands and enjoys you adoring them. She sticks them out into your direction, grabs you and measures her hands for you. Do you like it?

A men comes to the therapist, speciality for psychosomatic troubles. He has paranoia and he heard the voices. Doctor Drew thinks that patient is mad and he needs some special treatment. But he doesn't know for her sadistic tendencies. She wants to exorcist the demon from him. Another brutal scratching, this time his back. 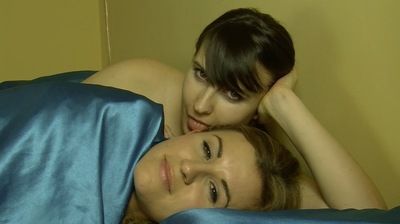 With a special spell the two sis Jane and Layla have downsized this girl, making her smaller.She was then tied to a stool and is now ready to be finished by those girls.At first huge Layla is pulling up her skirt. Now her mighty ass can be seen, with which she is immediately sitting down on the poor bewitched girl.She is being called names and they demand that she smells the huge ass. Afterwards it's Jane's turn. Her hot pants are pressing down harshly on the face and body of the small girl.But that's not enough for Jane - she is now removing her hot pants, pressing down on the little sweetie with her hot ass.And then everything culminates in the highlight of Layla sitting on Jane's lap - so that the girl has to bear their combined full weight, pressed flat against the stool!!!

here is the continuation of the masked footlicker 1 already published earlier in our store...clip starts as the loyal footlicker of goddess empress victoria wants to kiss and lick the feet of his goddess, but she prefers to kick him a lil bit with her tight size 41 (european) feet a lil bit because she decides when the slave has to kiss or to lick... and when she is not satisfied with his devotion the flogger gets out and he gets a few strokes on his body... next the slave has to lie down flat so that empress victoria can tease him with her feet on his face...and she can throat his mouth with her big feet... or he has to lick all the sweat from them...from the sole..from inbetween her toes... from everywhere... wonderful foot domination clip!

Today I want to use my little ugly slut in a special way! He really thought 50 Euros are enough! What a joke! This is way too less! Now he has to input his bank information on amazon. Now I can shop with no limit and buy whatever I like! And this ugly, fat moron has to knee beneath me and watch me spending his cash! :)

Christin and Lady B. crushes a inflatable swimming pool under her High Heel Pumps. 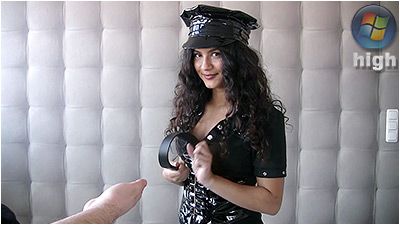 Lady B take a walk with her Partick Cox rubber Boots in the deep mud and walk into the deep water. She expresses her high heels deep in the mud at each step.

A femme fatale( BLACK WIDOW) is a mysterious and seductive woman(so true) whose charms ensnare her lovers in bonds of irresistible desire, often leading them into compromising, dangerous, and deadly situations.A femme fatale tries to achieve her hidden purpose by using feminine wiles such as beauty, charm, and sexual allure. In some situations, she uses lying or coercion rather than charm. She may also make use of some subduing such as latex gloves, sexy legs, sensual lips . Brainfucking eyes..Her ability to entrance and control her victim with a spell was in the earliest stories seen as being literally supernatural; hence, the femme fatale today is still often described as having a power akin to an enchantress, seductress, vampire, witch, or demon, having some power over men.Whats Goddess Celine ' s secret to enslave Her victim?? Lets see

When it comes to torturing action with high heels in a matter thats really severe and cruel cold angel is the best lady to do. and if this needs a proof YOU should watch this clip about trampling lousy slavehands with high heels! cold angel is wearing white high heels with a metal heel and a metal application around her toes which are painted in a red colour. as she finds some hands lying around she is very happy and starts to flat them with her sole, but soon the cruel metal heels go into action leaving deep red marks on the hands! and of course she is not shy to stand on the hands with full weight and both shoes. and of course she loves to walk over those hands... excellent handtrampling clip!

We caught up w/Miss Poison Ivy during one of Her nights out. She reluctantly agreed to allow 2 fans/slaves to lick Her spiky boots & Her sweaty feet. Her soles were really dirty too!A neighbor yells out to Miss Ivy asking what the hell these losers are doing & She laughs & yells back to him that they're foot lovers. The guy is totally baffled, the losers are more humiliated as they lick away. She sighed in disgust as they feasted on Her feet, then cut us off when She became thoroughly disgusted. She couldn't believe these losers were desperate enough to part with cash just to lick sweat 'n dirt off Her feet. She's used to real men who wanna fuck Her, normal-style. It was this disgust that propelled Her to spit a few times right on these slave as they worshiped Her feet...how humiliating!

Wearing my white jeans, I decided to TEASE MY SLAVE BY SITTING ON HIS FACE. Slave Jake happily obey but quickly realized that this FACE SITTING SESSION is soon becoming a SMOTHERING ONE! I now controlled Slave Jake breath. Let's see how long he can hold is breath for lol. Or maybe I should finish him, smother under my big boobs...

Alice's heading for the bathroom. She's wearing a dark-blue jeans and a red shirt. She gets into the bathtub and turns on the water. The first spurt of water already runs down her legs and then she turns on the shower head. She adjusts the temperature and once it's warm enough she starts to wet her jeans. In the end her jeans are soaked with water and she just enjoys feeling it.

Iwona has grabbed him with her huge hands. She only needs one of her hands to cover his mouth and nose completely so she can still browse her magazine with the other one. He's bound and can only hope that she'll allow him to breathe sometimes while she reads a magazine. Suddenly she gets up and you can see how tall she really is. Now she presses her hands down on his mouth and nose again - taking his breath away in her style.

Summer is throwing Rianna down on the floor so that she can rub her hot jeans ass. Rianna struggles, but she has no chance against Summer. Summer fully intends to sit down on Rianna's face ? and that's exactly what she does! She is using her as a seat cushion as long as she wants to. When she finally gets up Rianna turns away quickly.

Hey, naughty boy, you should be in bed and instead you are watching me in my pantyhose. Oh, do they turn you on? I see you have a hard on! Hmmm.... I feel like seducing you;) Look how good the pantyhose look on me. How smooth and silky they are, listen to the sound of them when I rub my legs together.... And when I slowly take them off, you will explode for me;)

Stellina sits outside at a stair and already awaits you! She spits right in front of her at the stony ground and puts her shoe at the same place to bray the spit... of course just to humiliate you - because you are going to lick all of her spit away very soon! Better try hard... Stellina has even more spit for you! And if you do a good performance she will give you her bubble gum too...!