I would like you to start off by vacuuming the back rest of the couch with both soles hanging over the edge of the seat cushions with toes pointing down and flexing as well, exposing the nice wrinkles on your soles. I am wrinkles guy. I love very wrinkled soles on women. As you vacuum the couch, I?d like to see the hose rub back and forth against your soles and heels with great close ups. I love detail of the wrinkles, calluses and any rough spots showing. If it?s ok with you Susana, can you ?allow? your heels, toes and balls of your feet to become rough before the shoot? I would sooooo appreciate this. Then you will remove the upholstery tool, and reach back and begin to vacuum your soles, toes and heels. It turns me on even more hearing the intense suction fluttering sounds as the nozzle is being worked over the wrinkles and creases and in between the toes. I like the sound of the motor fluctuating as the suction grabs hold of loose skin of your soles and heels. So sexy!!! Then you proceed to sit down on the couch and lift your foot over on your knee and begin vacuuming every inch of your soles, in between the toes and heels with great suction fluttering sounds. 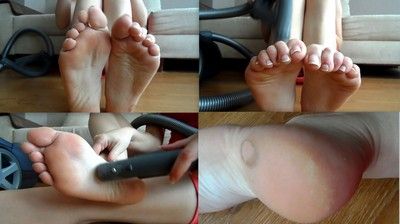 Sharpen my claws, checking their power on itself, acute.The tights I didn't like had to destroy. Be glad you're not under my claws.My sharp claws ready to painful scratch your body.Claws strong and sharp to tear and scratch slaves. Buy and see my video. Imagine what I can do with you.Have you not seen my long sharp nails? You looser!If you haven't seen, you lost a lot!Don't upset the mistress, buy the video!

Gorgeous Candy and Elsa destroy a cake with their incredibly pink, beautiful soles. Their luscious toes eliminate the pastry in no time and their perfect feet get totally covered with it's mess. They never stop giggling as the sight of their wiggling toes and tempting soles drive us crazy! No cake ever can be as enticing as the one drenched by the footsweat of these wonderful girls!

I was really excited! But I absolutely wanted to try it! The week was long and I tried out lot of cocks but most of them cum really fast. So I decided to try a professional callboy and ordered him to visit me at home. I wanted to be fucked long and hard in different positions. After seeing him sitting on my couch I was very nervous - and my panties were already wet too...! I wanted to feel his cock soon... Then he started to fuck me very nice and hot! Finally I had an orgasm after a long time...! And for a callboy he unloaded a really huge amount of sperm on me! At first I don't wanted to publish the clip because it is very private. But it was on my computer for some time and so I decided to give you the opportunity to watch me...! :-)

Candy is just back from running, she's been working out extensively to get as sweaty as possible for her foot fetish scene, but upon arrivar, she finds the producer wasting time watching previous pictures instead of getting the set ready for the shot. She goes incredibly mad at him, freaks out and shouts at him in implacable anger. She pulls him down to the floor and starts kicking the hell out of him. She grabs a belt and flogs him while constantly shouts at him in wrathful rage. She makes him lick the bottoms of her sneakers before she kicks them off to stomp his face with her sweaty bare feet. Her feet are sweaty beyond words, huge veins throbbing on the top, the soaked red bottoms are dripping wet. She brutally rubs them into the looser's face and orders him to inhale their unbearable vinegary stink! No mercy for the pathetic sloth! She grabs his nose with her toes and doesn't allow him to breathe until his face goes red then kicks him in the face and makes him smell the stink of her feet once again. She alternates back and forth between smothering the looser and making him her stink-sniffer. The beating, the shouting and humiliation never stops, she crushes his face with her bare soles and spits on his face. No matter how the looser begs for an apology, he has to stick his tongue out to be fed with the salty sweat of Candy's soles!

Dreams come true Loser. Im wearing a bratty, prink nail polish on my nails and those feet are ready to finish you off. I will make you jerk your dick for my feet and worshipping them while i humiliate you at the same time for being such a dirty foot boy.I tease you with my sexy soles, cute toes, wiggeling, toe pointing, arches and everything you could think off.I will even make you squirt your cum out of that nasty dick at the end.There may be a little twist to it at the end that little foot boy will not like. Still you will enjoy this and feel happy, after im finished with you. 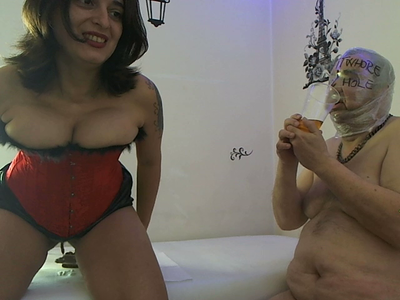 I am stepping on every part of petes body: his belly, his chest, his head, throat and cock.To raise the weight, i am standing on one foot or on tiptoes most of the time.

I?ve been wearing my worn pantyhose, socks, and sneakers all day, and now it?s time to give my pathetic pussy piggy a treat of my powerful foot aroma. I want to cover you with my sweaty feet, so all you can smell is Goddess before you get your bath with my precious nectar. I?ve been holding my piss just for you, my pathetic pussy piggy, so you will get a nice shower and even a little shitty surprise to make you even messier and more owned by my sexy ass! Worship all that comes from my sexy body!

Mistress hates cardio days!She has just had to go running outside and she got caught out in the rain. Now she is back and doing her situps. She hates it hates it hates it! So she decides to call in her live in slave to amuse her.Here she makes her slave sniff and lick her sweaty stinky gym shorts before she treats him to licks of the dirt from the yoga mat she is on. Then it's time the slave discovers how strong her thighs are even after a gruelling run. He doesn't seem to like it very much! But Mistress doesn't care as she headscissors the slave and makes sure he works up more of a sweat than she did during her run!

The video is not finish, this is the last half hour after 1 hour of the video 146.1 and 146.2. My hen try to eat all my shit but it is impossible. Now the eggs MUST GO OUT from the ass.... take a look! Do not do that at home, it can be very dangerous if you are not a hen!

Even though they've been modeling together for a while now, Emily's soles has never been licked by Candy, yet those amazing, perfect soles yearn for a caressing tongue all the time! When I came up to Candy with idea of this clip, she answered a big 'yes' without any hesitation, she was more than ready to give Emily's awesome feet what they really deserve: gentle, soft kisses, sensual sole licking and expert toesucking.

The slave diligently licks her ass, and as a reward he receives a portion of urine and large amount of chocolate cake right from his Mistress's ass. Bon appetit, sleazeball.

Spiders are strange creatures, but when they are in female human forms, you better runaway. They catch their victeem, release the poison in their body and do with him whatever they want. The poison is not deadly or paralised, the poison goes through his brain and makes him enchanted. Spiders are Teodora and Bea. Cruel head and stomach trample.

Even though they've been modeling together for a while now, Emily's soles has never been licked by Candy, yet those amazing, perfect soles yearn for a caressing tongue all the time! When I came up to Candy with idea of this clip, she answered a big 'yes' without any hesitation, she was more than ready to give Emily's awesome feet what they really deserve: gentle, soft kisses, sensual sole licking and expert toesucking.

Say hello to Tina!! Another of the new recruits, this clip will have you cursing up a storm ? just like the tattoo right above her ass!! It?s as if the tattoo was reading my mind as I was like ?FUCK!!? watching some of the monsters she let out her ass in these two clips!! Two great rearview clips, one at home and one gassy, ploptastic clip at her job. Hopefully this is the first of many explosive clips from this sexy young hotty!! Ass, gas, and turd splash aplenty ? you will be sure to be screaming ?Shitfuckgotdayum?! All at once!!