Hot girl has her ass up in the air and gives herself a milk enema, looking at the camera while she does it, then she releases the milk from her ass onto the floor. Some talking in the video.

Today potty you will have an real explicit jerk off instructions session first by hand , spit on your cock after in the hole betwin the heels and soles at my hot red pumps, worship my high heels while you jerk off and smell my pussy while i humiliate you and after i spit in the plastic plate i have in my new shitting device , i pee and shit to make that plate full and feed you with the paper i wiped for even more flavour i mix everything the spit with piss and shit all together , bon apetit! 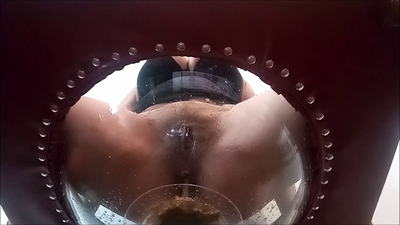 Chug Chug Who can take in the very most over many hours, holding it the whole time, teasing banter about who will loose, sneaky water talk. Then we step into the shower and release in the sexiest way! We take turns spraying piss all over each other. Kissing rubbing and loving our soaked warmth wet bodies.

I recently discovered enema games, itÂs just delight when stream of water mixed with shit hits from my ass right in the face of slave girl and she opens her mouth and chokes on this smelly mixture, but swallows. When mixture of shit washes over her young, slender body, and she smiles, she happy, she has received portion of shit. ItÂs so exciting, that I canÂt help myself and start masturbating and cumming from it all1. Double enema after scat party in showerMy two toilet sluts have finally met. At first, they were shy, wary of touching each other. As if they didnÂt believe they were real, that they both dirty toilet bitch. But after while, relaxed and began communicate freely, get used each other. After dirty sex, scat party, I drove them both into the bath and put each other enema. They put the hose in the ass each other and jets of dirty water with shit flew out on them, lying on their faces and on breasts. They made faces, posed, enjoyed their perversion. They washed, washed off the shit, soaped each otherÂs bodies, enjoyed touching. Soapy, foamy, but with dirty faces covered in shit, they giggled and laughed happily. Till last moment, they did not want wash their faces, they liked that their faces are covered in shit, that they could smell shit. It was so erotic, so sexy. I was just exhausted with desire and excitement looking at these dirty sluts2. Enema play, such fun dirty gameI wanted to play this morning, and decided to shit my new toilet slut. I put her in the bath and started giving myself an enema. Brown water with shit coming out of my ass over and over again. The slave girl liked it and she enthusiastically and gladly put her face and body under the dirty jets. Then I thought that the slut should also be washed from the inside, because little later I can fuck her in the ass deeper. And now the water hose was sticking out of this slut ass. I cleaned her clean until all the shit came out and enema coming out of her ass was clear. After such pleasant water treatment, we soaped and washed our body. I am happy, my new toilet slave girl always around and I can do with her whatever I want

I wanna try a new latex corset, my sub have just to lick it. Licks the latex corset, the latex gloves, my high boots which I also use to for trampling fantasy. I keep come in and out. Tease my sub and leave him alone. Have his cock under my control is my best pleasure

Haha! It's absolutely shameful how you assume that your little stump could be a real dick! No way! I laugh at you and tell you how bad things really are for you. You don't have a dick. You're dickless and desperate! My ass makes you wild, but your cock remains just a rotten, useless piece of meat!

This clip will make you Weak & vulnerable just how I like you. Maybe ill show you my bare boobs as I tease you into financial ruins

ITALIAN SPEAKINGHello slave, it is now 4 days since you are my prisoner, in this cell. I came to see you, to let you do the only thing you are worthy to do: lick the soles of my boots. Then you'll stay here another week; you will be hungry and thirsty, which I will satisfy in the most perverse way, as you know. my fantasy is limitless! But I also have big plans for you; I'll let you get out of here, but you'll have to be useful to me. You will remain in chastity, you will always be aroused and with a hard cock and you will do everything I want. I will lend you to other people, both men and women, who will pay to use your mouth and ass as they please and I will pocket your earnings. But you are not completely tamed yet, therefore, you will stay for two days without food.Ciao schiavo, sono ormai 4 giorni che sei mio prigioniero, in questa cella. Ecco sono venuta a trovarti, a farti fare l?unica cosa che sei degno di fare: leccare i le suole dei miei stivali. Poi starai qui un?altra settimana; avrai fame e sete, che io saziero? nel modo piu? perverso, come sai la mia fantasia e? senza limiti! Ma ho anche grandi progetti per te; ti lascero? uscire da qui, ma dovrai essermi utile. Rimarrai in castita?, sarai sempre eccitato e col cazzo duro e farai tutto quello che io vorro?. Ti cedero? ad altri, sia uomini che donne, che pagheranno per usare, a loro piacimento, la tua bocca e il tuo culo e io intaschero? i tuoi guadagni. Ma ancora non sei completamente domato, intanto ora starai qui per due giorni senza cibo.

ITALIAN SPEAKINGI left my maid in the dungeon with the task of cleaning and tidying up. I ordered him to put all my gym stuff in order too, both tools and clothes. As soon as I get back, the slave tells me that he has fixed everything, except for a weight that did not know where to put it. Failing to understand which one tool was referring, I tell him to show me. The jerk has confused a dumbbell to do the abs for a weight. I ask him how it is possible that he has it mistaken for a weight as it is very light. Then I start chasing him asking if he has ever used one, but it doesn't take long for him to admit that he doesn't abs for more than 15 years. Given the bad physical conditions in which he finds himself struggling to believe him: he is a mass of fat, weighs more than 100 kilos, flabby, without a thread of muscle. I can't take it anymore to be surrounded by slaves in bad conditions like him. If I am attentive to physical form, I follow a right one I feed and train my body constantly, it is right that my slaves do the same thing. So I tell him to show me how he can handle it the tool he had confused by weight. The results are painful, he struggles only to lower himself and move. I'll show him how it's done, but not even by seeing my movements can improve. I order him to do other exercises too, but he does them badly. I enjoyed seeing her movements so clumsy and clumsy, but he should feel a strong sense of shame. At his age he can't even do two abs in a row. From today on I will be very strict with him: if he does not lose weight and does not start playing sports, he will no longer be worthy of being my slave. It is up to him to decide whether to continue like this or change his lifestyle to be worthy to serve his Mistress.

You are there to worship me and my beautiful ass , my seductive words and this hot view will mess with your brain, with your body and your soul. You will be completely mesmerized by the power of my ass and you wonÃÂ´t be able to resist!!!

Teasing you with my young chubby naked body. I knows just what you are wanting. You canÂt help your dirty fetish and you wanna see more of what I has to offer. Bending over for you I open up my asshole and pushes out a smelly farts before pooping for you. Enjoy! &#128149;

Custom video:Hi Nika! Can you make a video of you stepping and stomping on fruits with your bareheels please? I want you to draw faces on the fruits and lay them out like cocks and balls, then make a evil face and STOMP on them. Please talk a lot about STOMPING their GUTS out and stomping on their faces for pissing you off. The fruits will be: Bananas, tomatoes and oranges only (Do Not Peel the fruit).