After a longer break concerning golden showers I had again the extreme demand to try it. I filled a champagne glass and enjoyed the taste of it. I have to say that it tasted very tasty again and I would not have shared it on any account. Pure golden shower, a love that never ends. 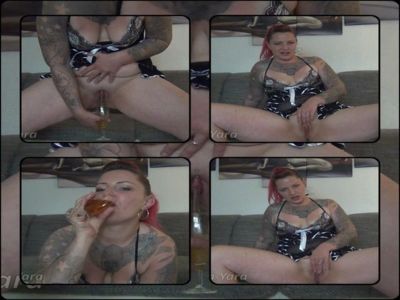 My Slave sometimes need to get his ass stretched yesterday night I use him as my fuck doll. He groan and scream but I have no mercy I use his ass whenever I want.

Yamato had no idea that his naughty time with his students would make a turn for the extreme. Binding his hands and stripping him completely naked, the evil vixens laughed at his disgusting body and told him that today, he was going to be their human toilet. Yamato gasped as he felt stream after stream of salty pee covering his face, and even entering the holes of his ears. He was completely drenched in golden shower, and the studentsÂ mocking voices made him completely subservient to the vixensÂ whims. His mouth was filled with the pungent pee, and the vixens had plenty more where that came from.

It's mesmerizing watching Queen Nora use her giant body to smash people. For being well over 600 lbs, this woman can move! And that's a dangerous combo... mobility and massive weight. She uses it in this video to bell flop and ass drop onto Caesar's little body. He was sore for a week after this one!

Discount price ..It's an old mobile video of mine.The little idiot must lick my feet and boots in the hotel room. You certainly dream of it too.First he licks my boots clean and sucks my heels like a whore.Then he has to lick my feet to suck the soles and toes.

129454 - N16_ Woooooooow amizing!Sitting in front of her pathetic male slave, she smokes a cigarette and blows smoke in his face

N16_ She's a beautiful girl, but she has a very cold heart. Sitting in front of her pathetic male slave, she smokes a cigarette and blows smoke in his face. Then the real assault comes as she grabs him by the hair and yanks his head around, then she spits right on his face repeatedly, thick mucous globs, one after another, until his face is covered in heavy, gooey slime. The saliva drips down the side of his face.

This guy applied to be my slave, but he has never been trampled before. Let's see what he's able to take! I'm not going easy on him obviously - I put on my buffalo boots with chunky, but sharp heels and a deep painful tread. The shoes leave nice marks on his skin with every step and he's struggling to take this punishment for sure - but of course he doesn't want to disappoint me and therefore tries his best to endure whatever I'm doing to him!

Do you enjoy to jerk of your tiny dick, little man? Do you cower beneath my giant woman glory, and tremble with arousal and fear as my enormous and magnificent towering ass pushes your brown doom out its hole? Then youÂll enjoy reliving the experience over and over again, as I torture you in this video of Giant Scat and Pee! I crap a HUGE load. It smells SO good. You should clean me up back there 😉 If you love thick smelly logs, closeups and watching the birth of a turd, this is for you.

Kimi and Domi are not doing well after the previous party night. They go to the forest to relax in the fresh air. But it doesn't help, the nausea is so big that they have to vomit directly at the car. The live toilet is taken out of the trunk and both girls puke their stomach contents directly into his mouth, he should swallow everything even if it is extremely much. For rinsing, there is piss fresh from the source.

My riding boots are really dirty - covered in mud and all kinds of dirt! And the slave's going to clean them now with his tongue - while I get to relax and watch him closely! I brought my riding crop along as well - just in case I'm not satisfied with the slave's work - or if I want to hit him just for fun! After a while I order him to take his shirt off - and I hit him with the riding crop while he licks the dirty bottoms of my boots. The riding crop leaves painful red marks on his skin and I enjoy how he moans in pain while licking my boots :-D

Can't get enough of my farts can you eh! Your addicted to my farts like a crack junkie. No matter how many you get you still need more;)Well here's your fix fart junkie, me on all fours with my knees together making my ass look super boombastic, and to top it off im gona blow my rotten egg farts in your face.... I bet you're sweating right now aren't you, stroking your cock off to me while i squeeze out my stinky honkers for your perverted pleasure. Go on fart junkie, sniff and wank.... sniff and wank.

Breakfast with Mistress Carter ...and Saurich directly followed the mistress' invitation! So he lies in impatient and joyful expectation under the glass toilet, on this beautiful morning in the studio Versus in Berlin!Since Saurich's last visit was more than 2 months ago and therefore he was not allowed to taste the mistress for a long time, Mistress Carter filled up her stomach the night before!A sin in red dresses Herrin Carter's mega-sharp curves and as the pressure in your intestines gets bigger and bigger, our mistress takes on the brown effusions, even the same place on your favorite throne!Since Saurich has not drunk anything, he gets the aperitif of the house, served directly from the goddess source! The rest of the golden yellow morning urine will be kept in the cup for later! Mistress Carter lights a cigarette on which your brown gold flows even better! Saurich opens his mouth and Mistress Carter's rosette bulges, under immense pressure of a thick sausage outwards!Will Saurich record everything and what is behind the bonus clip? Questions about questions, but the answers can only be found in the video!

What can be nicer for a mistress to assign tasks to her slaves!?! Today my little video-slave Mike received his first job from me. He should hang a weight of 5 kg on his balls and swing it, of course with tautly tied balls. Would you like to see if the loser has completed his first task to my satisfaction and if he is worth to receive more tasks?

Was asked for a smoking and coughing clip. Im just enjoying the nice weather outside while smoking a cigarette. Im still a little sick so my cough is really bad. And the smoke doesnt help.

As if I will grant my slave his wish to eat fast food? I don't think so! I catch him trying to eat burger and chips and drink a Coke. Unbelievable! My slaves are forbidden from eating unhealthy food and he is no exception! I will now rid him of this disobedience. I take off my sweaty sneaker and grab his Coke. Now I put my cheesy sock into the drink, refining the taste with flavour enhancer number one - my cheesy foot flavour! The slave is completely disgusted already, but doesn't know what I have in store for him next. I pour a nice dash of cheesy Coke over his burger and fries, then put my foot on the burger to enhance the flavour with my cheesy feet. I squash it to mush and the chips don't escape either! The slave now has to eat everything. Come on, open your mouth, eat all the fast food porridge from my feet!

His application and a first trampling test were so good that the slave is now allowed to take his final entrance exam. Because he has never eaten shit he was fixed at his own request, from this moment on there is no going back. Miss Jane and Lady Chantal now take control, they shit in a bowl and push him one spoonful of shit after the other in his mouth, Jane fixes his skull, folds his lower jaw back and Chantal fills his mouth. Then his mouth is held shut. He is already disgusted by the smell, he has big problems with the swallowing but the two girls show no mercy, they give him the whole bowl. Finally they torture his cock, Chantal wants to close his piss hole. Brutally she tries to sew it up and finally decides to just chase some stapler needles into it. Now the test is over and he has to stay fixed until the two of them may need him again.

Shrink-wrapped and completely helpless my slave is laying on the floor waiting in suspense to see what I have in store for him this time. Having had a good day I decided to be nice and just tease him for once. Sitting on his dick and face, laying on him on my back and belly I tease him throughout this clip. It must be so difficult not to be able to touch me, hahaha.

Miss Seren has very dusty soles today and she wants. the new slave to worship and to clean them with his tongue. She relaxes on the couch and puts her bare feet up. She orders the slave to lick off the dust and to suck her dirty soles. She controls his work and is not very satisfied...

Shrink-wrapped and completely helpless my slave is laying on the floor waiting in suspense to see what I have in store for him this time. Having had a good day I decided to be nice and just tease him for once. Sitting on his dick and face, laying on him on my back and belly I tease him throughout this clip. It must be so difficult not to be able to touch me, hahaha.