Two beautiful girls Caroline and Alice decided to arrange a nylon party for you . The girls put on nylon tights and decided to fill them with shit . First, the girls take turns posing in nylon pantyhose and show you their beautiful young Asses , after which the girls again take turns taking off their pantyhose and showing you their clean naked Asses . After the demonstration, Caroline and Alice put pantyhose on their Asses again and take turns shitting and pissing in nylon pantyhose . Oh my God these two gorgeous whores are filling them with shit, Oh my God how much shit .

my friend and I have fun. we are wearing a bikini. we caress each other. soon we will be left without a bikini. we are in position 69. we are lying on top of each other. we lick each other's pussy. we like to play like that. In the second part of the video, my friend and I smoke and fart. on a friend's leather pants. ass looks great. I wear a yupka and also fart. I donÂt wear underwear. shit comes out of my ass. this is seen in close up. 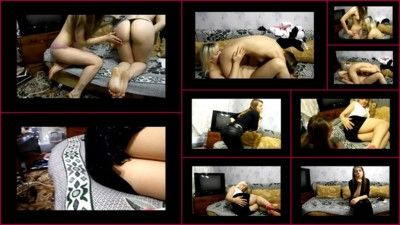 There you are - on time at the parking lot - and as a "reward" you're allowed to lay down next to the car in the dirt - so I can trample you! How do you like my sexy boots? The tread right in front of your eyes, as I walk over your face?! Yes, I know that hurts a lot - but seeing your mistress from this perspective surely makes up for it, don't you think? But that was only the start! These sharp-edged heels and the tread of the soles will leave some nice marks on your cheeks and your forehead - especially when I jump on your face! What the people, that walk by, will think of you - seeing how you're lying in the dirt and getting trampled?! And you'll stay on the ground, as I get into the car - and who knows, maybe I'll drive over you a couple of times while maneuvering out of the parking spot!

150532 - Training in the stable with Mistress Kristin

Our slave is hung on the pulley today. Together we whip his back until it is colored red. The pinwheel is not enough over the tail and sack, he should feel candle wax. Oh yes, it is hot and he wails ... Then the cooling with the garden hose follows. At the end Kristin gets the juice out of the sack. Hanging nicely overhead, he drips on the rubber boots ...

Our slave is going to be punished this morning. He is going to eat two portions of shit from me and Mistress Emily. A lot of corporal punishment, a lot of pee and shit and verbal humiliations. At the end after our slave eat all he will become our toilet for a long time. In his place can be anyone who wants to serve two hot goddesses!

Yana wanted to try something new and invited Caroline to visit her , Yana suggested that Caroline become her dog, which she would walk on a leash and which would have to eat shit from a dog bowl . Caroline thought about it and agreed, and the girls started recording a video clip . Yana leads Carolyn around on a leash, Carolyn is wearing a short dress, Yana lifts Carolyn's dress and Carolyn crawls around with her bare ass . But this is not enough for Yana , Yana tells the dog Carolina to caress her ass tongue , dog Carolina executes commands of the mistress with pleasure , Yana picks up the butt plug and inserts Carolina in the ass , and obedient Carolina crawling around again but with a butt plug in his ass . After walking around the room, Yana picks up an iron dog bowl and puts it on the floor , and fills the bowl with shit and urine , at this moment the dog Caroline looks at her mistress shitting and pissing in an iron dog bowl, Yana filled the bowl and ordered the dog Caroline to also take a shit and piss in the bowl . The dog, Karolina, followed her mistress's command with pleasure . After that, Yana ordered the dog Caroline to eat shit out of a dog bowl . Carolina happy to have fulfilled this command , but then Jana comes to mind is the idea that the Carolina dog opened his mouth and Ian poured her shit and piss in my mouth , Jana gives the team Carolina and she does , Caroline is sitting with his mouth open , and Jan takes the bowl in his hands and pours the piss and the shit in mouth dog Carolina in the mouth , the body Carolina running streams of shit and piss on Boobs young dog Carolina . The dog Caroline is covered in shit and urine but Caroline likes it very much .

We came after a party with my girlfriend to my house. We were a little drunk and were given lesbian caresses. She licked my pussy and kissed my lips. Near on the floor was a toilet slave. I took off my panties and pushed them into his mouth. I spit in his mouth and he sucked my shoes and heels. He opened his mouth wider and I shit on his face. I pushed into his mouth the remnants of half-eaten shit. You are my toilet, and you must always be ready to eat my shit, stupid scum.

The fo**ed discipline of your brain - I will sow the first seed and you will peck it up. You will let yourself sink deeper and deeper into my trance walk and then I will install the first trigger in your head and you will accept it.

Custom video:I would like to see You wearing sheer nylon white or pink panties, either bikini or fullbacks. No thong. I would like You giving upskirts under a short tight leather or whatever skirt. You are heavy breathing and moaning. Then You put Your ass up to my face real close and tell me to sniff Your asshole through the panties. How pretty the panties look on Your asshole. You want me to jerk off and become Your panty slave, worshiping You in Your panties and sniffing Your asshole. You are heavy breathing and moaning throughout the clip.

Four friends of Yana Olga Karolina and Alice arranged a dirty show for you , in which the girls were divided into pairs , the first pair of girls Yana Olga, the second pair Karolina Alice .Girls take turns caressing each other's Asses with their tongues after fondling each of the girls and shitting girlfriend in the mouth after they had filled the mouth, girlfriend shit girls already dirty again caress the anus of his girlfriend , and after these caresses of a pair are reversed again and the girls caress each other ass and new girl's shit to her friends in the mouth .

Wild Angel ties up her slaves bobby to the steel frame bed. The matÃ© aurochs Lady then sits down with her ass on its face. She turns herself over on its face, tries out all positions on this and is glad for it to have breathing times again and again only briefly. Then stand you on and takes off itself her pair of briefs. Bobby then must hold its breath between her naked buttocks for several minutes

Doormat under sock domination!The two dominant friends Lyla and Mira come home and first take off their dirty sneakers on their slave. Then they start beating Bobby with their feet. They jump on him and maltreat him with their sneakers. Then they continue to dominate him with their feet in the sweaty socks. Tied tightly on a leash around the neck, they hold him as they trample him and ****** him to smell their stinky socks. In addition, he gets to hear insults, humiliations and dominant orders all the time.

14386 - Model houses destroyed under my ass and converse

Look what I brought along - your precious model houses, that you spend countless hours to build. Now they're on the floor next to my feet and I'll play with them for a while! But you know, my playing can be a little rough on the toys! If those houses are sturdy enough to support my full weight? No, I don't think they'll stand my ass - or my converse - for long ... one after another they're flattened and destroyed under my converse soles or under my divine ass. And I know how much it hurts you, to see how your work gets destroyed within seconds - and that makes it even more fun for me!

This stupid slave will be mercilessly used as a human pony! His mistress, Princess Serena, sits on his back in sexy underwear and hot over-the-knee boots and pushes him forward. GO! GO!! RUN!!! The princess wants to ride so the slave has to work hard to serve her like a good pony. She gives him direction and orders him around mercilessly. What she says is law! And now he has to walk even faster for her... chop-chop! But that's not all. Princess Serena has great ideas how to use her slave pony in everyday life and makes him her pony 24/7!

14387 - Ballbusting and kicking with boots

I have my own toilet slave and he is my property. I like to play with him and use him as a toilet in my house. He must carefully and diligently lick my sweet asshole, before I start to shit him in the mouth. He's just a toilet for me and a useless thing. I think you must be happy that you can lick my ass when I'm shitting. Then I wipe my shitty ass and put used toilet paper in his mouth. A paradise for a pervert!