[THIS IS THE SECOND PART OF A SERIES. BUY AND LISTEN TO THE FIRST PART TO LISTEN TO THIS FILE.]You let your entire mind be consumed by Me. What's the point in resisting? You know this isn't the end of your developing obsession, so why stop here? Go deeper with Me. 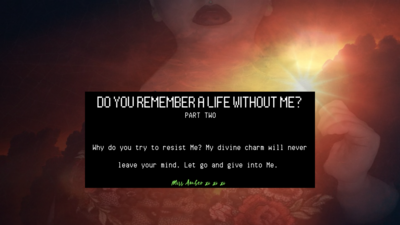 My thick, gorgeous legs dismiss any question of my superiority. No one makes you feel things like I do...nothing makes you want to submit more than these thighs. I know how desperate you are to serve me, itÃ¢ÂÂs written all over your face. I want your complete and exclusive devotion. Stare a while and tell me you wouldnÃ¢ÂÂt give everything in your power to make your queen happy.

I know how much you love dangling.I am dangling my pumps,making you weak and your dick hard! These motions drive you crazy with lust...

The chastity slave of Lady Stefanie and myself had the task to play a song for us and excite us with his piano play. Naturally, under harsh conditions! He has to play with his cock, which is locked in a chastity belt which is a natural surrounding for our slave.

Today I do not have that much time, so I doing makeup in the hall. And doing poop and in this time I doing makeup 🙂 My shits very stinky and hard until my butthole hurts. How do I want you to put your mouth on now! Worship my ass!

Hi fruit!! This clip is right your taste. Apple, banana or a little chokolade Ã¢ÂÂ under my feet they all get punished. Maybe you get your nut under my heels somedaysÃ¢ÂÂ¦

She is a beautiful, seductive woman who derives sexual satisfaction from defeading men,she is a classic and quite literal femme fatale....engaging in sexual intercourse, s uffocates him to his end by squeezing her thighs around his rib cage incredibly hard; she moans in pleasure as he moans in pain, and reaches orgasm as he is finished.

It's a lazy afternoon with nothing big to do and Ivet is sitting at home quietly reading a book. But suddenly she starts getting somewhat uncomfortable.At first she does not know why, but pretty soon she realizes her socks are too small for her feet. That's weird because she has these for a short time but it's getting worse and worse. She feels her toes would almost rip through her socks it if got only a little bit further. It's almost like...like her feet are getting bigger and bigger on their own, in real time and very fast.So Ivet decides she has to do something about it. She takes scissors and starts to cut wholes in those socks so her toes can stick out. It helps and finally she can read in piece again. But it doesn't last long. Those socks are too small again. "What the hell? Are my feet really getting bigger or what?" she thinks to herself. Now she can't take off those socks at all so she continues cutting them more and more until they are totally ripped apart and her bare feet are free. And what a view that is! Ivet has very sexy and the most soft soles of all. Wow, what a view!

This sweetheart doesnÂt like that her boyfriend broke up with her, so much that she actually decides to retaliate, not just by herself but with her dominatrix companion! What they do is barge into his home and then strip him of his clothes! By the time he is left with only his underwear, the ladies lay him down on the floor and then one sits on his face to smother him! It doesnÂt take long before the victim is starting to desperately grasp for air but with his position, his resistance served futile! Eventually, the ladies get off of him and he is able to release a sigh of relief, but before he could fully recover his breath, the dominatrixes take off their panties and one proceeds to urinate into his mouth! Caught off-guard, he ends up accidentally swallowing mouthful after mouthful of her piss! When she is finished, the other sweetheart takes her turn and does the same thing! The torment created a huge mess, so the women proceed to press the guyÂs face against the floor and coerce him to lick and suck every drop of urine off the ground!

I have two new neckties and today I'm going to learn how to tie a Windsor knot and a Half-Windsor. I'm going to look so smart in college when I'm done! I'll just lookup "How to Tie a Necktie" on my phone. Yes, there are a few here. This one looks good. So, start like this... no, wait, it's the other way around. Or is it? No, it's like this. No, I was right before! Let me take another look. Hmmm... okay, this goes under and then... is this right? Yes, I did it! Except this top piece is too short. I'll just tuck the long end inside my shirt. Now, I'll put on my jumper and my blazer. Oh, I'm going to get a lot of winks today!

Includes - foot domination - boot domination - foot slave training - foot fetish - ebony - foot fetish - foot worship - toe spreading - wrinkled soles - jeans fetish - cfnm - extreme domination - verbal humiliation - ignore - cbt - performance degradation In the back-breaking finale Mistresses put Porky the Christmas hog into stress positions.They know he has zero core control. And they also know that he loves their feet and shoes so much he would do anything to have them. So they put him in positions that he cannot hold and make him work hard to get close to their feet. Can Porky make it to their beautiful feet or will it all prove too much for him to handle?Watch and find out.

I will rip you off like no one else has before. Your life in hell starts right now! And as you can see, it is probably the most beautiful hell you can imagine. So let yourself be captivated and admire my perfect ass while I completely rip you off. Your money belongs to me and so I take everything what you have. Look at my hot ass and let me control you completely. I won't have to wait long for your first tribute and much more will follow! YOU work for ME! ... and you like that!

On your hands and knees and follow me upstairs bitch. Now get your head over this toilet and open your mouth while i piss into your mouth. Swallow it bitch, swallow it while it dribbles through my knickers. You disgust me! Now suck all the piss out of my knickers and make them clean for me. Now open your mouth so i can shove my wet knickers into it! Suck on them bitch! Sniff them and lick them for me! Gag on my knickers you disgusting $hit! Yes, have to pay double to be my toilet slut!

Ebony Mistress Yolanda wants her footfetish pet now to worship her bare feet. She wants him to lick her sweaty bare soles ( shoe size 42 eu) and to suck the sweat from her long toes. She loves to tease her leashed slave and see that he adores her. He is on his fours and has his worthless face to her goddess like feet

As soon as Sophia arrives home from work she hops onto her bed with her iPhone to relax. Wearing a red dress with grey opaque tights and pale blue high heels, she gets comfortable as she checks her messages. She definitely does not look at you. Loser.

Some nice, casual farting in my panties with a little naughty dirty asshole ♥ Do you smell that stink in the air? 😉 Then that means you havenÂt huffed up my farts strongly enough babe, if you were REALLY sniffing them up, all the gas would be in your lungs instead! Make sure to really cram your nose in my crack when I blow 😉I sit on the bed and keep feeding you with my massive load, pushing out my stinky enormous shit logs all over your mouth!! YouÂre exactly where you belong, slave, under my gigantic shit! You will eat it all, slaveÂ I said ALL! Don't you dare say NO!