That addiction only goes further now. When you look at my young tight body in this tiny, shiny bikini you must give in. You owe my just looking is to much. You are undeserving of all of what is in front of you. You crave me more then anything but you can never have such a hot, bikini Princess like me. Come here and feel my power.Listen to me how easy it is for me to enslave you while you are already in my little trap.

Mistress Amy's slave already has clear traces of her blows on his back. Once again, he follows her on a leash and feels her riding crop collection. The stupid slave actually believed Mistress had finished with him for the dy! But he was seriously mistaken because Mistress Amy has not yet had enough. She hits him again and again on his naked back until he is completely covered with red, stinging stripes. She doesn't spare his butt either - slapping is what she enjoys and what the slave deserves!

I love boots and I know you also share that fetish.I wear them and you clean themThat is just fair isnÂt it?It is your purpose to clean them, so knee down and do what I tell you to do

That's exactly where i want to see you! Down on the floor, to my feet. You don't deserve to be anywhere else. Your place is under my heels, so you can lick them clean!You think you are worthy of serving me?! I don't take every idiot as my slave. You have to prove that you are worth it!

Today kinky wife went running. As she was jogging, she saw a sex shop and because of her curiousity, she entered the store. She analysed the shafts with all the toys, when she saw this huge dildo that she bought with a kinky ideea in my mind : to fuck hubby's pussy, because he enjoys being submissive. So she came home and showed it to him and he was so delighted. So she put it on and first she face fucked him the huge toy, then she said to stay on his knees, on the bed, to bend down and keep his ass up while I humiliate him with the black dick. So she stretched his asshole with a smaller dildo, a glass one with progressive diameter spheres, then she poured oil and water-based lube and penetrated him deeply. He agreed to everything I did, showing me his devotion and how a good slut he can be. After his man's pussy got fucked well, she asked him to come in the living room, she took a pee in a glass and after the kinky wife humiliated her hubby by forcing him to drink all from glass and after clean the floor with his tongue, while she pushed his head with the feet.

ITALIAN SPEAKINGToday I'm with my mistress friend here @DungeonRoma and we are going to allow a couple of slaves to experience the privilege of licking our boots. We have dumped some sludge on the floor and our ponyboys are going to clean it up. We haven't told them what their little taste buds are going to be tasting, we want then to suffer and make sure they clean all the mess. With our perfectly polished boots, we begin by walking all over the messy substance. With our soles nice and dirty, we call over our ponyboys and order them to get their tongues going. I know they don't like the taste, It's a nice little toxic treat. We get them to continue to roll in their mess, while we stand over them looking down on them. They are so pathetic, and we spit on the floor as we continue to make them worship and clean our boots. It's a lot of fun having our ponyboys under our under boots, as they grovel and squirm in their pony sludge...

Lisa Marie has already damn near shit in every place of her apartment in a very short time!!! This time she takes the action to bathroom, to drop two sexy, seductive, FUNKY batches!!! Enjoy as she Gives a nice ass grabbing ass slapping, booty shaking showcase before spreading that big ole booty nice and wide to unleash two delicious loads in the tub!!! Enjoy as she wipes and shows you her FUNKY mess As well!!

She always comes to me exactly one hour after lunch time, to give me my beloved lunch. I always love inhaling her warm pussy juices, and her slit is always pink in the middle. She keeps her bush a medium trim, just the way I like it. But my treat, my lunch are always these medium-hard morsels, her poop logs that she pushes out with just a bit of effort. She always pinches her eyes slightly closed when the first log is about to drop into my mouth. It slides around a bit around my lips before sliding down into my throat. Oh what joy these logs bring! With each poop log that passes, I wait in anticipation as her anus expands, showing me the seat of heaven, the pink folds of her rectum, where all these are coming from. I would love to stick my tongue in there, and clean out all the juicy and chunky morsels out for her. I go rabid mad with joy too, when she uses a tissue paper to wipe away her syrupy shit from her butthole that juts out perfectly each time. My wife Atsuya is such a wonderful woman.

Tattoolady Sara Surprisink shows you her tattooed hands. You look at the tattoos on her fingers as she rolls a plastic cup between her palms, crushing it ever so lightly. Her fingers are strong though and she crushes the plastic cup until it is very small. You see her power and dream of being touched so hard by her... and maybe even crushed?

Venus Is Back with a hot new FUNKY half dozen minutes of Bubbleguts action!! SheÂs been mostly eating Veggies the past few weeks as she works at an organic food store. Looks like that vegan cuisine been fucking up her stomach however!! Enjoy Four new Booty bursts POV style!!! Her boyfriend needs a HAZMAT suit sometimes, as once again in one scene she has trouble keeping her backdrafts inside the bowl!!!

Charlie and Megan are playing a card game and whoever wins get to choose what the other one has to do. And it can be anything they can do right now on the spot. Megan wins the first game and she wants Charlie to smell her feet. She's these sneakers and bare feet in them and they are sweaty and smelly and it is the perfect punishment for the looser Charlie. He really does not want to do it but that's what they agreed on and Megan will not let him just walk. Charlie wants a rematch to make Megan suffer a bit for a change. It's on but Charlie quickly looses for the second time and is again forced to smell and kiss Megan's feet. He's pissed and they play their final third game where Charlie promises Megan she will smell his feet now! I wonder how that turn out...

ITALIAN SPEAKINGBeing superior is a way of life for me, and I have a way of getting exactly what I want. This bitch on the floor thought he could compromise and undermine me. Not so... He now lies defeated on the floor and is my prey. I only allow him the luxury of being in my presence because I want to show him how insignificant he is. Even in defeat, I know my bitch is excited by my beauty. He will be allowed to touch his cock, and even play with himself. However, ecstasy is NOT a option for my masturbating slut. Instead, he will endure my teasing and have to worship me. I pleasure myself as I walk around him, digging my stiletto heels into his flab. I also stand on his head, and get him to kiss my shoes. He begs me to allow him to cum. Not today... While standing over my slut, I sensually apply some body lotion, it helps relax my toned body when I'm using my trapeze and trample on him. With some more painful piercing from my stilettos, I finally remind him how much of a loser slut he is, and he will remain in my dungeon the captured prey of Mistress Gaia...

Goddess Lilith is relaxing on Her patio, and lucky for you, She doesn't even notice you! It's only natural - why would a pathetic loser like you even register for a perfect, beautiful Goddess like Her? Get a nice close look at Her divine, sexy feet while She relaxes outdoors in the lovely weather!

This toilet worm decided to hide from me, he thought I would not find him and will not come for him! Four years of meetings, humiliation, lower than it is he, impossible to fall! He's a litter box, a full toilet, and a downed schmuck. I love it to lower, humiliate and flog. He's sitting at home, shaking, waiting for me to come. After all for him begins then serving, full humiliation, eating shit. He's a subhuman, he's my living toilet bowl

You know, you are just there to serve me.Whatever I want to, you have to do it.This time I tell you how I use you as my toilette.You are my human toilette and you have to keep my toilett clean, wherever I go! 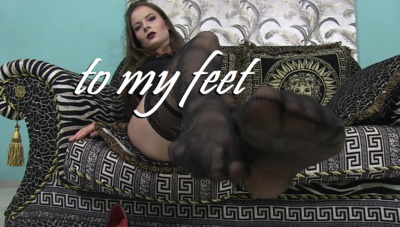 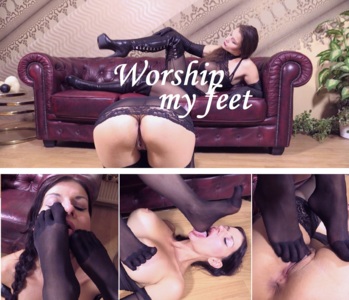